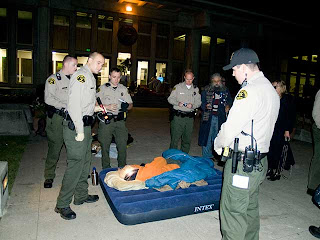 Attorney Ed Frey is arrested for sleeping on August 7, 2010 as part of Peace Camp 2010
protest against sleeping bans. Photo by Bradley Stuart

Santa Cruz, Ca. — A two-judge panel has affirmed the conviction of Ed Frey and Gary Johnson for sleeping.  The law, PC 647 (e), the statewide anti-lodging law, outlaws illegal lodging. But it was clear from evidence introduced at trial, statements by Judge John Gallagher, and finally statements by the two appeals Judges, Paul Marigona and Timothy Volkmann, that “sleeping” equals “lodging” for “the people.”
The judgement upholds the conviction for the two men, and Gallagher’s draconian sentence of 6 months in jail for sleeping for each man. Unmentioned at the appeals hearing was that Gallagher had also set bail at $50,000 each, a bail that was later modified to $110, which was the bail schedule all along for this “crime.”

Of course the “crime” in the case of PC 647 (e) violations is to use the extremely broad activity of “lodging” as an arrestable crime against homeless people who have no other choice than to live in public places, and against protestors, in this case, set against the backdrop of Occupy Santa Cruz. 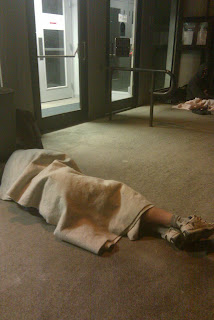 A homeless man sleeps as part of Peace Camp 2010, in front of the Santa Cruz County Courthouse
on July 12, 2010  photo by Becky Johnson

Appeals Court Judge, Paul Marigonda began in support of denying the appeal by claiming the defendants were claiming “a right to sleep anywhere.” He claimed that neither County law nor the 9th Amendment to the Federal Constitution did not provide “any such right. That government provide any such place to sleep, is not there either.”

Marigonda then referenced three sources. He said that “lodging can be setting up in a place with the intention of spending the night,” language which he cribbed from section “c” of the Santa Cruz City Ordinance 6.36.010 Camping prohibited.

“It can be to occupy a place temporarily,” which Marigonda got from a regular dictionary.
“It can be to settle in or live in a place temporarily, that may include sleeping,” which is the definition Judge John Gallagher cobbled together to give to the jury that convicted Frey and Johnson in May of 2011. He asserted that “time, place and manner restrictions” were “entirely reasonable.”

Marigonda then addressed the six month sentence handed down to the two men. “It’s not unusual when the two men involved refused to accept the terms of the probation.”  Frey and Johnson had turned down 400 hours of community service and a 3-year probation including ‘obey all laws’. 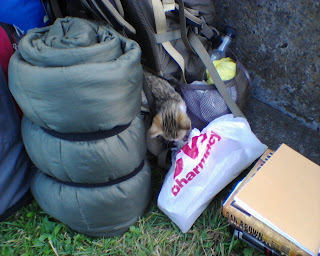 Johnson, who is homeless, had objected to the ‘obey all laws’ clause saying that he “needed to sleep” and that he couldn’t go three years without sleeping. Gallagher had resolved that by jailing Johnson on the spot telling him he “could sleep in jail.” Frey had called the 400 hours of community service “slavery.” Considering that DA Sara Dabkowski had sought 50 times what a conviction for MC 6.36.010 section a, also known as “the sleeping ban,” the law they were there sleeping in direct violation as an act of civil disobedience.

Ed Frey, who was both a defendant and the defense attorney, began by correcting Marigonda.

Judge Timothy Volkmann assured Frey he had read Ed’s brief “four times.” “While sleeping is expressive conduct, it is subject to time, place and manner restrictions.”
“The statute itself says you can’t lodge anywhere in the State. And not at any time in a 24 hour day. And the California State Constitution doesn’t allow cruel or unusual punishment. Has anyone else you know been sentenced to six months in jail for sleeping?”

“You didn’t take advantage of your probation offer,” responded Volkmann.

Marigonda, referencing his experience as “10 years as a prosecutor in domestic violence felony cases” he said it was a common practice to charge the maximum sentence for defendants who refused probation terms. “And it could be just a touch.”

Frey countered, “We generally sentence based on harm to a victim. How did Gary and I harm anyone by sleeping in front of the courthouse when all the workers were home in bed?”

Marigonda: “Judgement of lower court is affirmed in its entirety.”

But Frey and Johnson were not immediately jailed to complete their 6-month terms for sleeping.
Frey sought permission from the court to certify the case for further appeal, which the court granted. However, on Friday, June 29th, the court turned him down. So now he is preparing a writ of Habeas Corpus to appeal to the Supreme Court of the State of California.