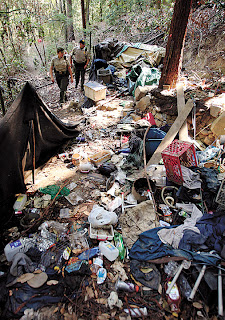 SENTINEL photo by photographer Dan Coyro shows two park rangers approaching a very messy campsite as part of the sweeps which began on July 9th, 2012. Such images are used to villify homeless people and portray the worst case scenario as the norm.

Do Homeless People “trash” the Environment?

What do the number say?

by Becky Johnson
September 23, 2012
Santa Cruz, Ca.  — After a recent beach/inland waterway clean-up by Save Our Shores, the following formula was proffered: Litter Produced = (2.4 oz to 12.9lbs) per volunteer hour x hours worked. Using this standard, we can try to assess how dirty the areas where homeless encampments have been found were/are.
Unifying terms into decimals, we find a range of (0.17 lbs – 12.9 lbs) per volunteer hour collected with an average being 6.4 lbs on Monterey and Santa Cruz County area beaches and inland waterways
SOURCE: Classes of Trash, Monterey County Weekly Sept 20, 2012.
“At the extremes: Carmel River State Beach yielded an average of 2.4 ounces of trash, and Elkhorn Slough produced 12.9 pounds, per volunteer-hour.”  — Laura Kasa, Save Our ShoresSept 20 2012 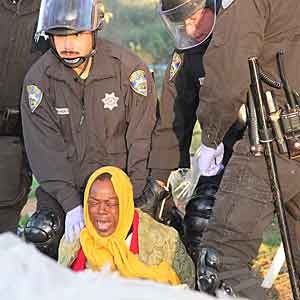 A homeless woman is rousted from a large encampment by the Santa Cruz Police Department on December 8, 2011 from San Lorenzo Park. Photo by Chip Scheuer
With this formula in hand, we can work backwards and determine how “trashy” an area was at the time of the clean-up. Since homeless encampments are found primarily in the inland waterway areas, those are the statistics we are most interested in.
Save Our Shoresreports that 550 volunteers picked up 850 lbs of trash (pollution) in 3 hours. So the average person picked up 4.6 lbs of trash at a rate of 1.54 lbs per volunteer hour.

Photo of Occupy Santa Cruz encampment in San Lorenzo Park Nov 1 2011 Photo courtesy santacruz.com
The San Lorenzo River Clean-up produced 315 lbs of trash by 130 volunteers in 3 hours or 2.4 lbs of trash per person at a rate of 0.8 lbs per volunteer hour. While not as clean as Carmel River State Beach, 0.8lbs per volunteer hour is squeaky clean. Especially compared to the average found throughout the region during the entire beach/waterways cleanup.
Perhaps homeless people are cleaning up more trash than they are leaving?
Or these are areas where Public Works, Caltrans, and Boy Scout groups clean up regularly?
In any case, groups like Take Back Santa Cruz and editorials by Don Miller in the SENTINEL can’t really claim that the  sweeps are justified because of a clear environmental danger.
City Council candidates Cynthia Mathews, Richelle Noroyan, and Pamela Comstock don’t have any evidence of an “environmental” reason for supporting the homeless sweeps. And Mayor Don Lane‘s silence on the sweeps is deafening.