I’ll be distributing the following flyer today and in the days ahead at the Stand Up/Speak Out Rally demanding Justice in Ferguson (and Santa Cruz). See http://www.facebook.com/events/309072619289447/?pnref=story 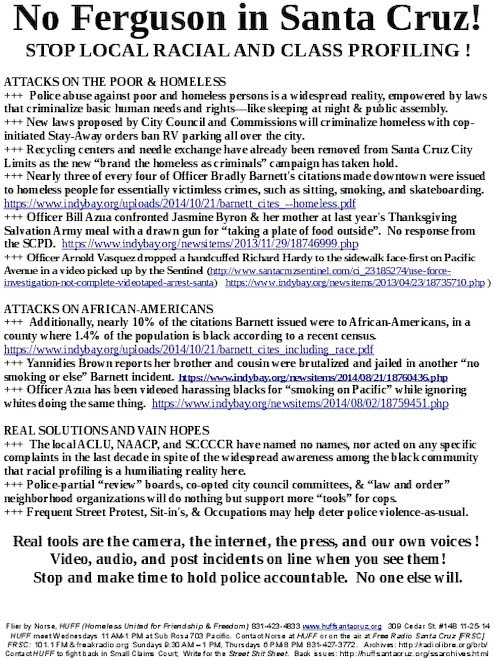 ATTACKS ON THE POOR & HOMELESS
+++ Police abuse against poor and homeless persons is a widespread reality, empowered by laws that criminalize basic human needs and rights—like sleeping at night & public assembly.
+++ New laws coming to City Council will criminalize homeless with cop-initiated Stay-Away orders & ban RV parking city-wide. http://www.indybay.org/newsitems/2014/11/24/18764553.php
+++ Recycling centers and needle exchange have already been removed from Santa Cruz City Limits as the new “brand the homeless as criminals” campaign has taken hold.
+++ Nearly three of every four of Officer Bradly Barnett’s citations made downtown were issued to homeless people for essentially victimless crimes, such as sitting, smoking, and skateboarding. http://www.indybay.org/uploads/2014/10/21/barnett_cites_–homeless.pdf
+++ Officer Bill Azua confronted Jasmine Byron & her mother at last year’s Thanksgiving Salvation Army meal with a drawn gun for “taking a plate of food outside”. No response from Chief Kevin Vogel of the SCPD. http://www.indybay.org/newsitems/2013/11/29/18746999.php
+++ Officer Arnold Vasquez dropped a handcuffed Richard Hardy to the sidewalk face-first on Pacific Avenue in a video picked up by the Sentinel (http://www.santacruzsentinel.com/ci_23185274/use-force-investigation-not-complete-videotaped-arrest-santa) http://www.indybay.org/newsitems/2013/04/23/18735710.php )

ATTACKS ON AFRICAN-AMERICANS
+++ Additionally, nearly 10% of the citations Barnett issued were to African-Americans, in a county where 1.4% of the population is black according to a recent census. http://www.indybay.org/uploads/2014/10/21/barnett_cites_including_race.pdf
+++ Yannidies Brown reports her brother and cousin were brutalized and jailed in another “no smoking or else” Barnett incident. http://www.indybay.org/newsitems/2014/08/21/18760436.php
+++ Officer Azua has been videoed harassing blacks for “smoking on Pacific” while ignoring whites doing the same thing. http://www.indybay.org/newsitems/2014/08/02/18759451.php

REAL SOLUTIONS AND VAIN HOPES
+++ The local ACLU, NAACP, and SCCCCR have named no names, nor acted on any specific complaints in the last decade in spite of the widespread awareness among the black community that racial profiling is a humiliating reality here.
+++ Police-partial “review” boards, co-opted city council committees, & “law and order” neighborhood organizations will do nothing but support more “tools” for cops.
+++ Frequent Street Protest, Sit-in’s, & Occupations may help deter police violence-as-usual.

Real tools are the camera, the internet, the press, and our own voices !
Video, audio, and post incidents on line when you see them!
Stop and make time to hold police accountable. No one else will.