Correcting An Error: Hernandez not Azua Drew a Gun on Jasmine Thanksgiving 2013 A prior flyer I posted on Santa Cruz Indymedia & the HUFF e-mail list, and distributed at two rallies erroneously identified Officer Frank Azua as the SCPD off-duty officer who drew a gun on Jasmine Byron and her family at the Salvation Army Thanksgiving meal in 2013.  They reported Hernandez was menacing them for “taking a plate of food outside” as others were doing.  I apologize for any confusion caused by this error and further discuss it below.  I also include the corrected flyer for those who want to read and/or distribute it.    –Robert Norse 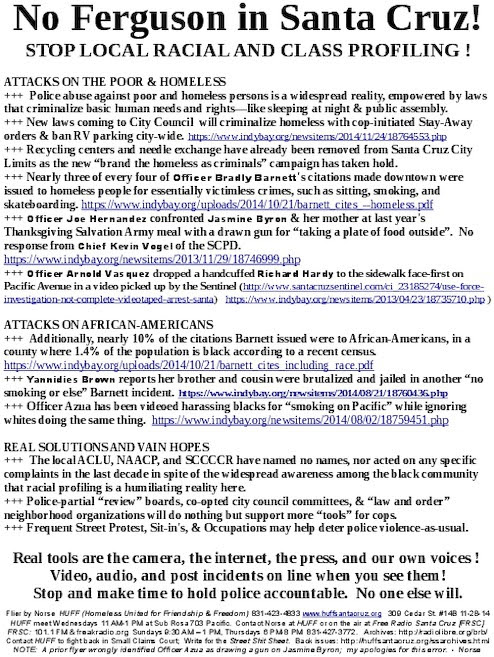 He has also been identified in numerous incidents in radio interviews with those who reported abuse: (search for “Azua” at http://www.huffsantacruz.org/brb-descriptions.html ). However, my apologies for a mistaken reference to him in this incident.

Officer Joe Hernandez was identified by Jasmine Byron, her partner, and her mom as the man who drew a gun on her for taking a plate of food out of the Salvation Army Thanksgiving meal last year. In radio interviews on November 28, 2013 and December 8, 2013, Hernandez was described as the gun-pointing and subsequently taunting individual. (See http://www.huffsantacruz.org/brb-descriptions.html and search for “Hernandez”).

The flyer included with this comment is a corrected version with the proper information.