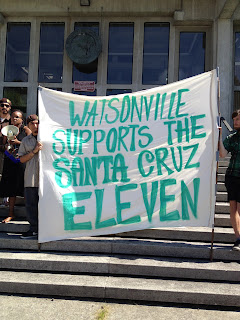 Banner from a rally held by the Brown Berets of Watsonville
in support of the Santa Cruz Eleven.
Photo by Becky Johnson May 4, 2012

Santa Cruz, Ca. — I went to court this morning. There was much confusion. At my August 20th hearing, I had thought that only Franklin “Angel” Alcantara and Cameron Larendeau were required to be at this hearing. But my lawyer called me yesterday, apologized for not being able to come to the hearing himself, and told me one of the other attorneys had agreed to appear on my behalf.

When I got to court, only Angel and Cameron’s names were on the court docket. Wonderful. Someone screwed up again, I thought. I wonder who.

They call our case “The Occupy Case” which is ironic, considering all the arguments that went back and forth to disassociate the 75 River Street Occupation of a long, empty bank building from Occupy Santa Cruz and its encampment in San Lorenzo Park. In the end, OSC stood up and formed a working group to provide support to the Santa Cruz Eleven as we came to be called.

In my own case, I had a lot to do with the encampment in San Lorenzo Park and very little to do with the 75 River Street building takeover, but this case is not about facts and evidence.

We are now down to seven defendants. Bradley Stuart Allen, Alex Darocy, Grant Wilson, and Ed Rector have all had their charges dismissed due to lack of evidence against them. Judge Burdick had also found the case against Cameron and Angel to be lacking evidence, but ADA Rebekah Young refiled against them.  This hearing had been scheduled by Cameron’s attorney, Briggs, and Angel’s attorney Ruben.  But Ruben wasn’t there. Nor was Briggs. Lisa McCaney, appearing on their behalf asked Young “Where is the additional evidence that you said you had to refile charges against my client?” A photograph referred to in a police report has still not been produced.

Young replied that she had been “confused” as to which motion would be resolved that day. She wasn’t the only one!  Burdick had sharp words for Ms. Young.

“Its my understanding that I’ll be ruling on her motion independent of any discovery violations under discussion. Violations of due process and the procedural morass that has brought us to this point.”
This “point” being ten months into the legal process, eight months after sheriff’s came to my home and arrested me while I was cooking pancakes, and still two more months to go just to get to my preliminary hearing. And I am eager to get to that point too, where I believe I will too be able to dispense with the specious charges against me. You see, the DA has no case against me.

“I apologize. I’m not prepared to argue her motion.” What else is new in this case?

“The people here have a right to a preliminary hearing, not an additional discussion and no new facts,” Burdick told her.

“Your honor, I believed the two sole witnesses at the preliminary hearing to be sufficient.”

“She says she has additional witnesses who can identify Mr. Alcantara and Mr. Larandeau but none have been forthcoming,” McCaney charged.

“Work has been extremely sloppy and we don’t have viable opposition papers.” But then inexplicably he said “I’m going to deny the motion to dismiss.”

Burdick asked if there were any other discovery issues. Attorneys complained about an empty file on one of the disks, but Young insisted that that was how the file came from the SCPD. None of the attorneys mentioned that the videos released many months ago did not have soundtracks, but now, on videos released August 20th, the sound was back but without explanation. Of course this meant the attorneys (and defendants) must now go back and watch over 25 hours of videotape again in order to LISTEN to the dialogue of police engaged in while recording to see if there is more evidence there.

Hackett, appearing on behalf of Norse’s attorney David Beauvais said that Beauvais had repeatedly requested for procedural manuals on instructions for police on crowd control, use of tear gas, and their policy concerning 1st amendment issues.

Young answered that the SCPD “has no first amendment policy.” Burdick seemed puzzled by this. “There must be some manual or procedures for crowd control and the use of chemical agents.”

Should it be achieved by subpoena? one of the defense attorneys quipped.

Burdick ignored this and just instructed Young to “look for those.”

Then Burdick announced that he had contemplated what the appropriate sanctions against the DA’s office should be springing from his statement on August 20th. He ruled that the sanctions would be to bill the DA’s office for additional expenses that out of county attorneys only had when they were required to come to attend additional hearings due to Young’s failures to provide discovery in a timely or forthright manner. There would be no relief for defendants dragged to every hearing on threat of arrest, missing work, school, time with loved ones and incurring costs.  Attorneys are paid, defendants are not.

The remaining defendants face a preliminary hearing on January 7th at 9AM in Dept 6. A readiness hearing is scheduled for January 4th also at 9AM.