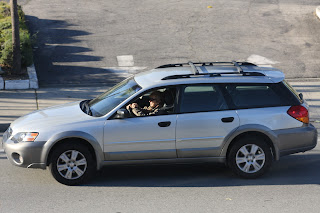 SCPD police evidence photo of Councilmember Katherine Beiers leaving the scene of the crime at 75 River Street at 3:31PM on December 1st

NOTE TO READER: This excellent article by Brad Kava of the Santa Cruz Patch contains many details of Monday’s April 23rd preliminary hearing for four of the Santa Cruz Eleven. However, Gunter did not testify to damage Kava describes as “tearing up pipes, damaging electrical fixtures, writing on walls,” nor have any of the over 600 photos provided to defense attorneys shown this. Gunter on March 13th described “graffiti inside the elevator” but no photo of that damage has been turned over to the defense. The ONLY  graffiti shown in police photos was on the air conditioning ducts on the ROOF. Gunter also testified that the property manager told him over the telephone that the work had been completed “by 5 contractors” but that he did not have copies of those work orders and had not followed up by contacting any of the contractors directly. None of the bills for damages have been turned over to the defense as of April 25th, almost 3 months after charges were first filed and almost 5 months after the building was “vandalized.”   In the meantime, one defendant has attempted suicide, two defendants have been denied the ability to renew their teaching credentials, several defendants have spent thousands of dollars on bail money and private attorneys. One defendant may have lost her housing due to these charges. Another defendant must travel by public transportation for 3 and a half hours each way to attend each hearing. All citizens must worry about walking in a march or attending a meeting, fearing that they too will be arrested for felony “aiding and abetting” should another person at the meeting or march actually commit a crime.

— Becky Johnson, Ed.   (full disclosure: I am a defendant in this case) 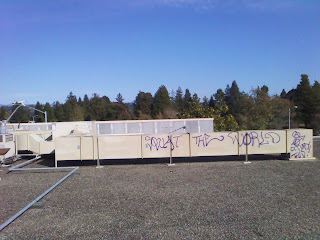 Santa Cruz, Ca. — At the first day of a preliminary hearing, Santa Cruz County Judge Paul P. Burdick asked the prosecution to come up with some arguments about why he should carry the case to trial.

In a surprising development, a Santa Cruz County judge told a courtroom Monday that the state’s case against four protesters accused of trespassing and vandalism last November at the vacant Coast Commerce Bank appeared to be lacking sufficient evidence to go to trial.

“I have to say that at first blush ‘The People’ might have some problems with these four defendants,” Judge Paul P. Burdick said at the end of the first day of preliminary hearing. The four defendants – Franklin Alacantara,  Edward Rector, Grant Wilson and Cameron Laurendau – have been charged with felony conspiracy to commit vandalism, for being part of a takeover of the vacant bank at 75 River St. Nov. 30, which left the building with $22,000 of damage.

If convicted they could be sentenced to three years in prison and a fine that would cover the damages, according to prosecutor Rebekah Young. The prosecutor has claimed that by trespassing in the bank building, the suspects are guilty of the vandalism that resulted. She has filed a conspiracy charge that she says ties the trespass to the vandalism.

Four public defenders arguing against her said that because this is a first amendment protest, a higher standard of proof is needed, such as direct evidence of a crime.

More than 100 people were in and out of the bank building during the protest, according to testimony Monday. However, District Attorney Bob Lee and Santa Cruz Police only came up with enough evidence to charge 11 people. The DA’s office even posted pictures and videos on YouTube and Facebook asking the public to help identify suspects.

Evidence presented Monday seemed shaky during testimony by two Santa Cruz Police officers.
Officer William Winston said he saw two of the suspects going in and out of the bank building, but didn’t witness them doing any vandalism, nor could he say how long they stayed in the building. Detective David Gunter saw none of the suspects at the bank, but as the officer put in charge of the investigation, he recognized them from videos and pictures taken by other officers.

However, he too could provide no evidence that they stayed in the building after being told to leave, one of the requirements for trespass. Nor could he provide evidence that they had met and organized the takeover, which would document the conspiracy charge.

“They are trying to scoop up too many people into a net,” said defense attorney Jamyrson Pattori, after the judge asked the prosecutor to present more legal arguments via email before oral arguments continue Wednesday at 10 a.m.. “Some people were just looky-loos and some kids were just attracted to the music. They are just trying to incorporate everybody.”

Judge Burdick asked Young, the prosecutor, to supply him with an email listing cases setting precedents for her arguments to be received by him and the defense attorneys by noon Tuesday. Then, the preliminary hearing would continue Wednesday.

A preliminary hearing is the chance for the judge to decide if there is enough evidence to hold a trial. Two of the 11, Alex Darocy and Bradley Stuart Allen, will be tried May 29. The others are still pending preliminary hearings.

Some other suprising things emerged in the hearing.
*The prosecutor asked to use photographs taken inside the bank by the defendants because, she said, they were better than the ones submitted by police.

Her request was denied because the photos were used in the hearing of Darocy and Allen, and hadn’t been given to defense attorneys as part of discovery in this case.

*Police had three grenadiers standing by on November 30 prepared to launch chemical weapon grenades into the bank, if needed. Detective Gunter was one of them, but he said he was sent away after a short time appraising the takeover.

*The estimated cost of the damages dropped from $30,000 to &20,000-$22,000, after police asked the banks lessee, Wells Fargo, to provide itemized accounting of the repairs needed to fix the damage done by vandals who tore up pipes, damaged electrical fixtures, wrote on walls and piled up furniture to block doors.

*District Attorney Bob Lee assigned one of his newest prosecutors to the case. Rebekah Young, a former TV journalist, only started working for the office in December and this is her first big local case. She had no investigators or backup attorneys at her table, something unusual for such a high-profile case.

*It took the District Attorney three months to file the 11 charges in the case. They were filed February 9. The takeover started November 30 and lasted a couple of days.