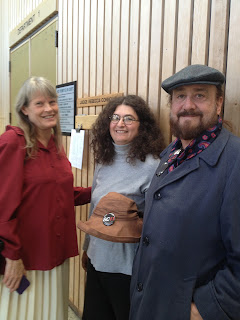 Linda Lemaster (left) attending one of many pre-trial hearings with supporters, Leslie and Kent, November 2, 2012 for a “lodging” ticket she got two years ago. Photo by Becky Johnsonby Becky Johnson
November 9, 2012
Santa Cruz, Ca. —  According to ADA Alex Byers, Linda Lemaster faces Six Months in Jail for the “crime”of sleeping/not sleeping on public/private property with /without possessions for a long/short period of time which can be intentional/unintentional, all subject to the “permission” of the “authority.”
Linda is on trial for PC 647 ( e ) or  illegal “lodging” under a little-used portion of the State code, which sheriff’s had not used before citing protestors at Peace Camp 2010.
According to Byers,  a protester with his/her sign attempting to peaceably assemble to seek redress of government grievances may do so:
ONLY where the govt. tells them they can.
ONLY when the govt. tells them they can.
And, apparently, NOT while sitting, lying down, or sleeping since these = lodging. And if a Sheriff tells you you can’t “lodge” then whatever you are doing is “lodging.” According to Byers, Sheriff’s didn’t need to prove a person was “lodging” in order to issue a citation. Only that they were “still there on the steps when sheriff’s came back.” 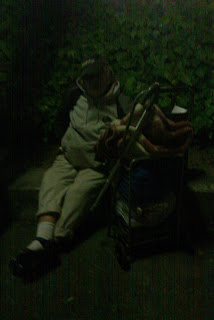 On the night of August 10th, as Linda Lemaster was cited for illegal lodging, Sheriff’s moved elderly, Collette Connolly off the steps. Here she collapses in exhaustion on her belongings a scant 50 feet from the courthouse. Why Sheriff’s told us the steps of the courthouse were illegal at 4:30AM but the parking lot was not was only one of the many arbitrary and confusing encounters Peace Camp 2010 had with law enforcement. Photo by Becky Johnson

Oh, THAT’s a convenient definition of the code! When a sheriff hands you an unsigned piece of paper, then, according to Byers, that person “has been educated”that they no longer have the right to carry a sign, to protest, or to seek redress of government grievances.  And if a protester wants to publicly assemble? They must follow “time, place, and manner restrictions” which are not written in the law anywhere. 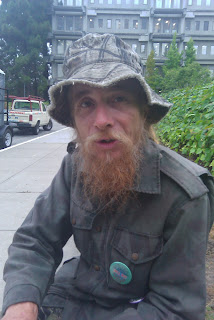 Christopher Doyon a.k.a. “X” of Peace Camp 2010 pauses on the lower steps at Peace Camp 2010. In the background, Ed Frey’s white, pick-up truck can be seen hitched to the camp porto-pottie. Other than Ed’s privy, homeless people had no access to a bathroom at night other than at Peace Camp 2010. Photo by Becky Johnson July 30, 2010
For ADA Alex Byers, camping = lodging except that “camping” is not illegal in that particular location under County Code.
While camping is , according to Byers, essentially the same thing, “lodging” rates 6 months in jail and/or a $1000 fine. And CAMPING is legal in the location where Linda was cited.   Committing the same crime in the City (and Lemaster WAS in the City when she was cited) rates a $92 citation or 8 hours of community service as a possible consequence. So why did the sheriff’s use the statewide “lodging” code rather than the County’s camping code or the City’s Sleeping and Blanket ban?
According to ADA, Alex Byers, it was due to “tolerance.”
Those at Peace Camp 2010 know better. The plucky little group had discovered that the County’s camping ban does not apply to the grounds around the courthouse and government center. In other words “camping” is legal there. Also, due to jurisdictional agreements, City police do not patrol the grounds at the Government Center. Sheriff’s opted to not enforce City codes against Sleeping and using  blankets. Codes that are all infractions, violations of which do not include jail. These were the twin laws the protest had assembled to challenge.
On July 29th, 2010, Ed Frey received a letter from County Counsel, Dana McCrae. She informed Frey that city ordinances ARE enforceable at the County Center, since it is within the City limits.  The SENTINEL reported that the reason no citations had yet been issued was because “government officials, law enforcement officers and legal experts (had to) sort out what rules apply to the property.” 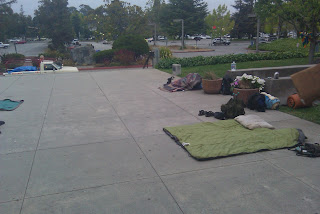 Peace Camp 2010 used public space which is unused at night. This photo taken on July 20th at 8:13PM shows people setting up bedding. At 8:00AM, Ed Frey would drive the porto-pottie off of the property and normal use of the facilities would commence.  Photo by Becky Johnson

Around the end of July,  County Counsel, Dana McCrae dusted off the lawbooks and dug up a code which used language lifted from an 1880 law in California designed to keep freed slaves from moving into the State. Judges Gallagher and in this trial, Connolly further eroded civil rights by creating a definition which lifts language from the 1851 Indiana State Constitution which states:  “No Negro or Mulatto shall come into, or settle in, the State…”

The new definition of lodging which Judge Rebecca Connolly approved: “To occupy a place temporarily or permanently, or temporarily settle or to live in a place, it may, but does not have to include sleeping. It means more than just sleeping and less than moving into a place permanently.”

Byers told jurors of the flyer sheriff’s passed out willy-nilly to anyone who wanted one: The flyer only stated you are illegally lodging without permission. Merely telling Petitioner or anyone else that they are lodging or that they do not have the owner’s permission in no way clarifies what lodging means or how one can avoid it. In this circumstance “to lodge” illegally appears to have meant to the deputies- to further physically occupy space in any manner on the steps of the Santa Cruz County courthouse. 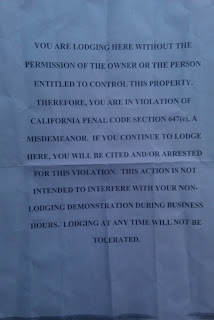 Sheriff’s deputies stopped calling what we were doing as “camping” and started to accuse us of “lodging.” We knew something was coming. About a week later, sheriff’s handed out this flyer which had no letterhead, was unsigned, and unconvincing in its text as part of their “Education phase.”  –Photo by Becky Johnson Aug 7 2010
THE COUNTY’S PLAN
Byers told jurors about a 2-phased Plan to get the protesters to leave the location.
–Education phase followed by an Enforcement phase.
“Lt. Plageman testified that they weren’t’ interfering with the right to protest.
Their goal was to stop people from the intent of the protest which was to violate
the law.” He told jurors that flyers were handed out in the following way:  “If you were lying down, you were sleeping, you were violating the law. At 4:30AM, they were already lodging when the
Sheriffs deputies arrived. They were already breaking the law.”
Sounds like a slam-dunk.
So does the “law” outlaw lying down, or sleeping? No. PC 647( e ) outlaws “lodging”
but that word is not defined anywhere in the code. In 2011, at the Peace Camp Six
trial, Judge John Gallagher made up a definition by looking at old codes and
a dictionary.  Judge Rebecca Connolly has made up a new definition. In neither
case, were any of the defendants allowed access to either definition of lodging
when cited two years ago.
“The dictionary includes 14 different definitions of “lodging,” Defense Attorney Jonathon Gettleman quickly added in.
But Connolly had decided 18 months ago that PC 647( e ) is Constitutional, so
jurors don’t know that defendants (and their attorneys) have challenged that
Constitutionality. See:“Sleeping is not a Constitutionally protected right”
Byers showed some really dark and grainy videos which roughly show a mess. John Valley’s voice can be heard and the sound of Linda coughing.  Even worse, he paints the protest as characterized as “junk all over”, none of which has ANYTHING to do with Linda Lemaster. Linda was wide awake at 11PM with no bedding. That, at 4:30AM, sheriff’s came and found her sitting up and looking sleepy, doesn’t mean a crime was committed.
Byers asserted more claims that I doubt are true.
“No one is allowed to lodge on the steps of the courthouse at night.” Huh? Lodging isn’t defined as an activity done at night only. And when Linda Lemaster was there at 4:30AM, she wasn’t trespassing. The courthouse steps were a legal public place to be (at the time. Since this has been changed by County administration to make it a crime to BE THERE between 7PM and 7AM).