An hour and a half protest against the latest turn of the screw choking off street performers, artists, vendors, and tablers drew singers, poets, chalkers, a cop, and even a long-winded critic. Activists have put out a flyer announcing a second protest next Sunday October 6th. 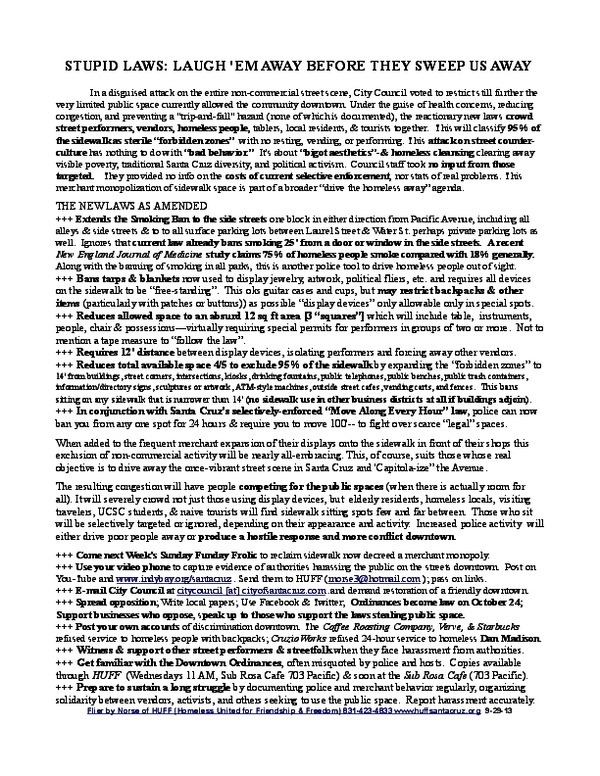 flyer_for_9-14__revised_9-29.pdf
download PDF (120.8 KB)
Saturday night some of us came together for the first street protest in front of Forever Twenty-One last night since the passage of the Downtown Ordinances on September 24th. Activists bravenly chalking their outrage on the sidewalk and informed passersby of the new shrunken space street performers will be allowed.

For those who know the downtown, that will be three of the 2′ X 2′ squares on Pacific Avenue within which a performer (or tabler or vendor or artist) will be expected to confine instrument, body, chair, table, and accompanists). Since this is clearly impossible in many cases, it will mean that to be legal you need to get a special permit.

To do this requires 3 days to a week notice, is reportedly free, but may only be permissibble in a few spots downtown (though it wasn’t clear from my conversations with the Parks and Rec Department last week whether the special permits were limited to that area). Obviously arriving to play spontaneously (if you wish to have a guitar case or other “display device” out–will be a thing of the past. Unless folks ignore this law and continue their traditional practices.l Having any “amplified sound” whatsoever supposedly now requires going through the SCPD and takes 2 weeks, or such was the info from P and R.

The new rules also require 12′ distances between those those busqueing, tabling, displaying artwork, or vending on the sidewalk as well as none of this activity at all within 14′ of any building, any change-dispersing machine, any fence, any bench, any drinking fountain, any public telephone, any public bench, any public trash can, any information or directory sign, any sculpture, any “no panhandler” meters, any vending cart, any sidewalk cafe, any street corner, any intersection, or any kiosk. Sitting or sparechanging is also restricted to those tiny patches of ground. Any cup, cap, or guitar case is defined as a “display device”.

The Saturday night protest focused on the absurdities of the new laws as well as older ones that ban bouncing or throwing a ball downtown, hackeysacking, using a squirt gun, or chalking on the sidewalk with erasable chalk. Sports fans brought a basketball and a small football. Bubble-blowing–which is permitted–was also provided as a legal interlude. Hopscotch enthusiasts brought sidewalk chalk. A “Box of Crime” was displayed and offered to the police as a form of “crime control”.

Office Headley arrived with camera to stand with arms folded taking occasional snapshots of those giving out flyers of the chalkked sidewalk delineating the small “permitted” zones that go into effect on October 24th. When asked if he were there on complaint or to give out citations, he smiled broadly and said nothing. Such picture taking has been used in the past to later cite peaceful activists like Wes Modes who was dragged into a full-blown trial for walking in the parade along with hundreds and hundreds on New Year’s Eve 2010 (See http://www.indybay.org/newsitems/2010/12/17/18666919.php ).

On my radio show today, I played some of the audio of the protest, which included poetic performance by Lyrical Eye (Isaac Collins), speeches by Becky Johnson, and others, and spirited conversations with surprised locals, baffled tourists, and irate critics (though fewer of those). Most passed by swiftly en route to their Saturday evening activities.

I did get wind of larger protests being planned by more “respectable” folks–and some of these may be discussed at the next HUFF meeting (Wednesday 11 AM Sub Rosa Cafe 703 Pacific Ave.).

I was impressed with the determination to restore First Amendment rights downtown–some activists began to chalk, though the area was under surveillance and they might later well be subject to fines of hundreds of dollars. Others sat on the sidewalk in “illegal” locations.

Another Sunday “Funday Frolics” protest has been announced for next Sunday afternoon. 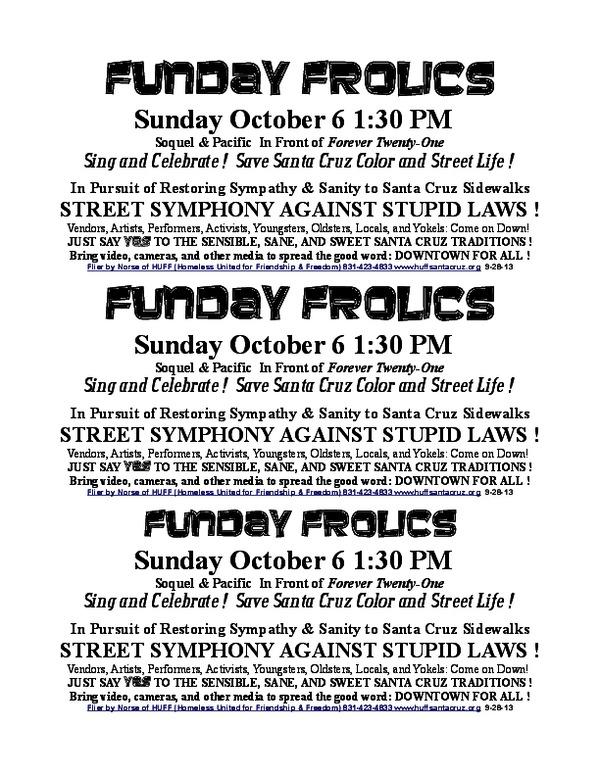