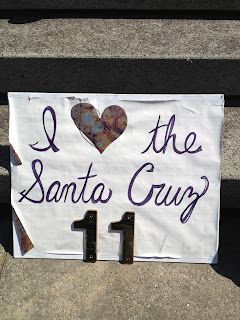 Endless hearings ordered to appear before Judges where nothing of substance

Santa Cruz, Ca. — In what has become a long series of dreary court hearings where almost nothing happens, Judge Sillman did not fail to disappoint. Friday, the June 1st hearing was ostensibly to install defendant, Brent Adams’ public defender, to consider whether DA Rebekah Young had finally turned over sufficient discovery, and to set a new, NEW date for a preliminary hearing (This will be my THIRD date for a preliminary hearing).  In all of these hearings, should any defendant not appear in the proper court at the proper time, a warrant is issued for their arrest.

I call it punishment prior to conviction.  DA Bob Lee and his henchwoman, Rebekah Young have been hanging up the lives of 11 citizen activists, overcharging them with duel felonies and misdemeanors, and smeared them as “vandals” and “trespassers” who “don’t respect private property.” His attack on alternative media journalists is naked and self-serving. How can one journalist covering the event be ignored and another charged with felonies for the same actions? But this is the essence of the charges against nearly half of the defendants. One hundred to three-hundred people went into the building in 3 days time, but only these 11 have been charged.

In court on Friday, June 1st, Sillman curtly announced that the attorney he had appointed for Brent Adams the previous week “was not available” and that he was in the process of locating whether Attorney Charlie Stevens was in the building and could be appointed. Adams, who has been appearing pro per since his former PD, Ryan Murphy, discharged himself a week ago, told Sillman ” I’ve already spoken with a Public Defender and he’s agreed to represent me.”

“Who is that?” Sillman asked.

“Jonathan Gettleman,” Brent replied.
“We are not in the process of reaching that particular name,” Sillman replied and ordered all defendants back in court ANOTHER week later at 8:15AM rather than appoint Gettleman on the spot. That means all 5 defendants, their 5 attorneys, press, and supporters must yet again rearrange their schedules, find transportation, parking, and appear under threat of arrest AGAIN because Sillman refused to appoint a PD that the defendant wanted and would be satisfied with.

For me, it’s deja vu all over again.  Judge Ariadne Symons took five hearings to appoint me a public defender, when she could have appointed the attorney I wanted on day one. She accused me of having “other income” and challenged  that since I own a 15 year old car that I had recently purchased for $1,500,  as “proof” that I was income-eligible for the services of a public defender.

We all saw the results of failing to appear at one of Sillman’s hearings. When DA Rebekah Young refiled charges on two defendants whose charges had previously been dismissed by Judge Paul Burdick, she ordered defendants Cameron Larendau and Franklin “Angel” Alcantara to be present in court at 8:30AM. When neither defendant nor either of their attorneys appeared, Sillman ordered a warrant issued for each of them. But supporters murmured that it was highly unlikely that all four people had blown off the hearing. A far more likely scenario was that DA Rebekah Young had made yet another misstep and failed to notify anyone properly.

This judicial merry-go round is getting me queasy.  The next surreal act is scheduled for June 8th at 8:15AM in Dept. 6.  Meanwhile, “victim” Wells Fargo Bank has not rented 75 River Street yet, and with an asking rental of $35, 231.34 per month, it’s going to be a cold day in hell before anyone rents that building. And if the 11 (now 7) defendants wind up in prison with felony convictions, well, Wells Fargo wins. You see, Wells Fargo is the biggest investor in the for-profit prison industry in the United States. Not only do they tell the police and DA to do their bidding at public expense, but they profit from anyone jailed, whether justly or not.

They are a bank. It is all about numbers for them. They charge 11 people with “trespass” and “vandalism” and attempt to extort a phony “$31,000” in damages from the defendants. Later, while under oath, Det. Gunter of the SCPD testified that when he checked “The damages were not as severe as we first thought.”  Now the damages are “$21,000”. The only “proof” of any damages were police photos of graffiti on the air conditioning ducts on the ROOF of the building! It is doubtful it cost $21,000 in spray paint to restore the ducts to their original…beauty.

I suspect the ACTUAL damage to the building to be in the hundreds, NOT thousands of dollars range. Perhaps DA Bob Lee should investigate Wells Fargo for putting up such outrageous claims of damages that it amounts to fraud.

I’ve been thinking about Rosa Parks lately.  I compared Rosa Parks to the people who occupied 75 River Street– a vacant bank building–and tried to turn it into a community center.  It was a noble idea. To turn a blighted building, hoarded by a greedy and heartless bank purely for tax benefits, into a vibrant building serving the public good. I’d long eyed that building as a perfect homeless shelter, since it sat empty year after year employing no one, sheltering no one,  and taking up useful space uselessly.  In 2010, while 75 River Street sat empty, four homeless people died of exposure out of doors in Santa Cruz.

Rosa Parks refused to move to the back of that bus, and she was arrested.  She broke the law intentionally, but did so for the greater good. The people who occupied 75 River Street were like Rosa Parks. They intentionally broke the law, but did so for the greater good.  Now let me make one thing clear:  I am no Rosa Parks. In this scenario, I would have been the person who stayed at the bus stop and never got on that bus in the first place. I’d be like the person who SAW Rosa Parks’ brave act and cheered her on from the sidelines.  You see, I never went into the building. I’m a big chicken.

Yet the toll for the defendants is piling up. “Angel” Alcantara was able to make it to court that day and quash the warrant. But Cameron Larendau could not. He lives in Oakland, CA., doesn’t own a car, and it takes him 3 and a half hours by public transportation to come to each court appearance. Desiree Foster, the youngest defendant at 19 years of age, is taking care of her mother who is undergoing chemotherapy for cancer. When Desiree was arrested, her mom bailed her out of jail, but they really couldn’t afford the $500. Shortly after that, Desiree attempted suicide and was hospitalized. In my own case, I was handcuffed at my home, carted to jail, and spent the night locked up in “G” Dorm.

The costs to our 1st amendment rights are harder to calculate. Who has been too chilled to join a march since the prosecutions were announced? Who no longer wants to associate with the 11 activists charged lest they be next, or with anyone involved in Occupy Santa Cruz?  And what photographer, journalist or blogger isn’t chilled when the CONTENT of their reporting is being charged as “aiding” and “abetting” criminal activity? Yet “the people” as represented by DA Bob Lee march forward, entirely at public expense, and push forward Bob’s dirty little dog and pony show, where our rights to freedom of speech, freedom of the press, our rights to peaceably assemble, and our rights to seek redress of government grievances are severely challenged and truncated just to promote the interests of Wells Fargo and the status quo.  Where is State Attorney General Kamela Harris on this? Does SHE approve of what DA Bob Lee is doing?