Homeless people are particularly vulnerable to the Drug War.  Yet from the stats acquired from the SCPD, it appears that in the last six month period not one citation or arrest was made for marijuana use, possession, transportation, or sales for anyone with a “transient” or “115 Coral St” address.  This does not jibe with my anecdotal understanding as someone who has interviewed people regularly for Free Radio Santa Cruz.
The Measure K Committee refused to ask the SCPD for its actual records on marijuana citations and arrests, to see if if is complying with the law. The law is the Measure K Initiative passed in 2006 by the voters (over City Council hostility). That requires that marijuana enforcement for those over 21 on private property be “the lowest enforcement priority.” 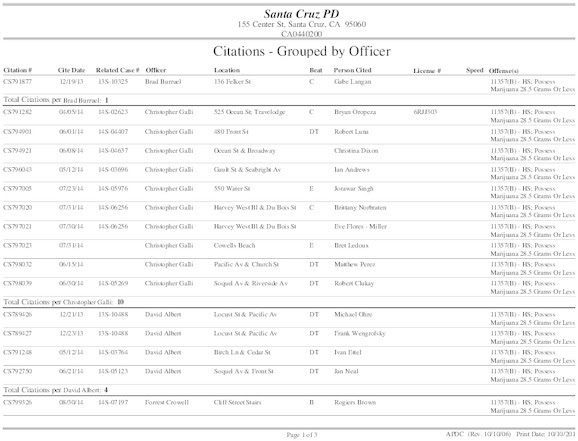 marijuana_citations_scpd_nov_2013_-_present.pdf
download PDF (11.9 KB)
In a prior article, “Measure K Committee Craps Out Again–Another Free Ride for the SCPD” at http://www.indybay.org/newsitems/2014/10/06/18762534.php, I described how the Measure K Committee again refused at its token meeting on 10-6 to even request, much less examine, the actual citation and arrest record of the SCPD regarding marijuana. It simply rubberstamped the police summary as being Measure K compliant.

To do this requires to look at occasions where citations and arrests were made on private property and what the circumstances were.

Committee member Coral Brune independently requested those records and forwarded them to me. I reprint them below.

I will encourage Brune to make a follow-up request to view the actual citations and reports. If she won’t, I will. The citations and arrests need to be examine individually to see if police actually did follow the law.

As for discrepancies regarding the number of citations/arrests for homeless folks,  I as yet have no explanation.  It seems highly unlikely that not one citation or arrest happened during the period from November 2013 to the present which involved a homeless person.
To view the more extensive police summary of the citations and arrests made for marijuana incidents during this period, go to https://www.indybay.org/newsitems/2014/10/10/18762717.php .