NORSE’S NOTES: A recent story on Santa Cruz indymedia (“Selective Enforcement documented on Pacific Ave. in Santa Cruz, CA” at https://www.indybay.org/santacruz/ ) highlights the well-known SCPD and Ranger harassment of vendors, performers, and other tablers on Pacific Avenue will giving merchants with their display devices and unpermitted signs a free pass.

Anti-performer and anti-activist laws (also known as the Downtown Ordinances) were originally designed in 1994 to go after homeless folks and peaceful sparechangers (as well as to give police broader powers to go after youth, minorities, and anyone who didn’t “feel right” to businesses and police). Some of them are itemized at https://www.indybay.org/newsitems/2010/08/29/18657087.php

In order to pass constitutional muster, the “h” word couldn’t be used or it would violate the 5th and 14th Amendments (equality under the law).

As the noose was drawn tighter with expanded forbidden-to-sit zones and a 1 hour “move along” law in 2002/3 and further expansions in 2009, merchants continued to violate the law.

According to the city clerk’s office some years ago, it was never legal, for instance, for stores to put up free standing signs on the sidewalk advertising their stores. There was not even a permit process for doing so.  Yet merchants regularly have done so.  Police and city enforcement officials have turned a blind eyes.

The “performance pens” set up by City Council in 2014 (and then severely restricted unilaterally and behind closed doors by city staff) are routinely ignored by merchants when they display their wares, preempting more of the little public space left to the rest of us.

It’s striking to me to read the July 16 letter from Martinez and Khoury [below].  I will be making a Public Records Act demanding copies of all citations issued since the letter was written.

An obvious thing to do is to begin calling the police on various merchants to cite merchants for violating the law and arrogantly expropriating the public space.  Then document what police do or don’t do.   And publicize it.

HUFF (Homeless United for Friendship & Freedom) previously considered advising merchants that we’d like them to join in a coalition to support giving individuals the same right to set up their tables as merchants have.   Otherwise, for every citation given a street performer, vendor, activist, or homeless panhandler, there would be a specific documented complaint made out against a store owner with a display device sitting out on the sidewalk.

I’d be happy to support folks doing this.

In fact, I’ll be bringing it up as an action item at the next HUFF meeting (Wednesday January 11th 11 AM at the Sub Rosa).

Here are some selections from The Jones/Skelton Report on indybay at https://www.indybay.org/newsitems/2017/01/08/18795200.php that exposes this practices.

A little over six months ago park Rangers began patrolling downtown Santa Cruz, CA in part to enforce new ordinances which modify and restrict activity for anyone placing anything on the public sidewalks and open spaces of downtown Santa Cruz. These ordinances have had major implications for musicians, street performers, artists, political advocates, and anyone else wishing to use the public spaces for many forms of constitutionally protected activity (see SCMC Chapter 5.81, below).
They are required to be located within a “zone” or “box” 4×6 feet in size, leave after one hour, and follow additional restrictions. These spaces have been reduced in number progressively by more than half over the last couple of years, with few viable spaces remaining. Businesses have also long used public spaces and sidewalks to display merchandise and signage. They received a letter dated July 21, 2016 (see photo, below) outlining the need for their compliance with the new laws. Rangers and Santa Cruz police issued citations for violations of these codes, and many performers, artisans, and other individuals who weren’t allowed under the new code, or weren’t “in a zone,” or were there longer than one hour, were cited. As the months wore on and the business signage and racks of merchandise began to reappear along the avenue, there has been no apparent concern by law enforcement at their daily presence (almost never “in a zone,” and often displaying “banned items”).
Many individual citizens and visiting performers to Santa Cruz continue to be cited for various related “offenses,” however. Tickets we have seen have all been in excess of $300.00. 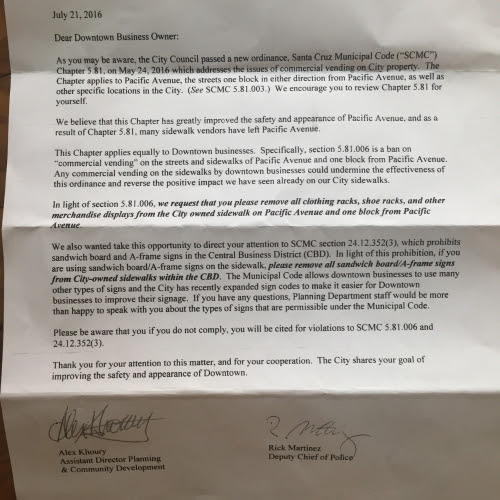 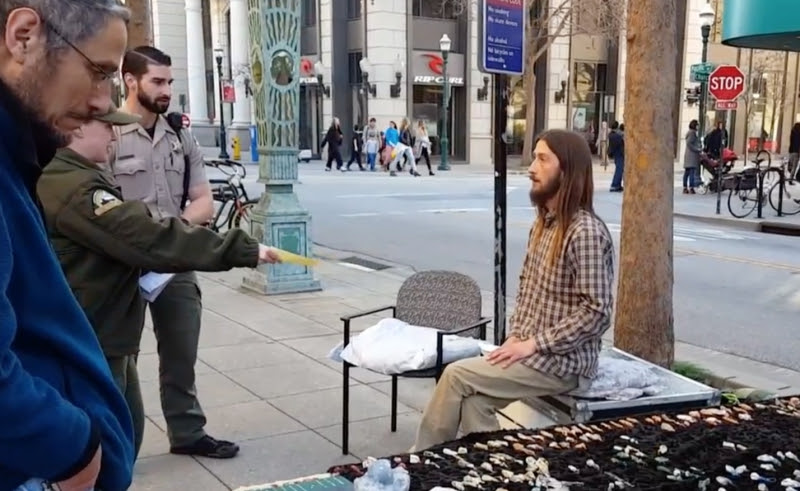 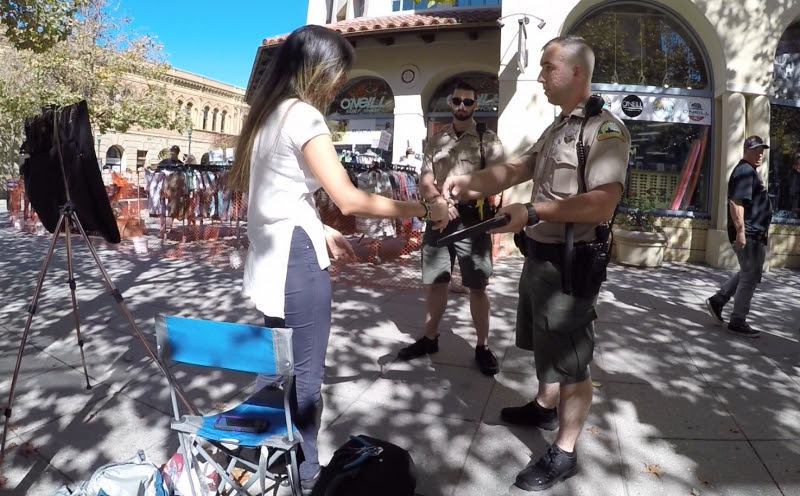 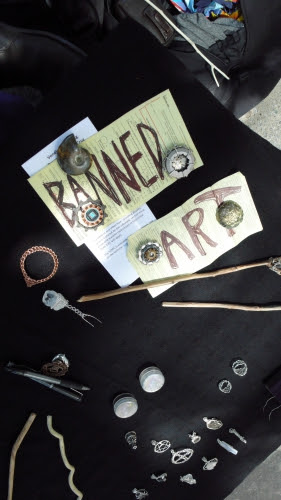 This man utilized his multiple tickets to enhance his message (and continued protest)
§Other signs and merchandise just down the road on Jan 7, 2017
by The Jones/Skelton Report Sunday Jan 8th, 2017 11:00 AM 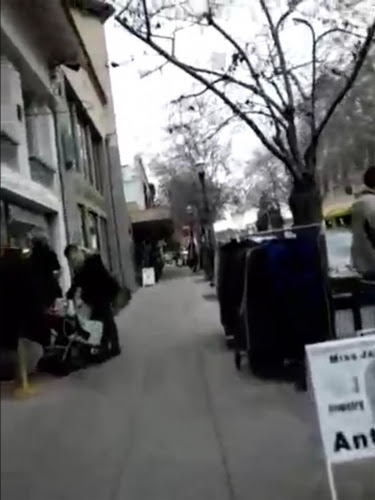 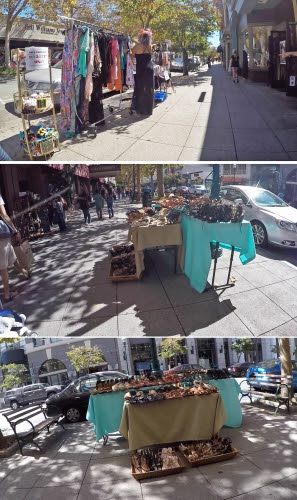 Other signs and merchandise on public space on previous days on Pacific Ave.
Chapter 5.81 VENDING AND DISPLAY DEVICES ON CITY PROPERTY
…
5.81.002 DEFINITIONS.
For the purpose of this chapter, the following words and phrases are defined as follows:
(a) The term “commercial vending” means to sell, offer for sale, expose or display for sale, solicit offers to purchase, or to barter food, goods, merchandise, or services in any area from a stand, table, pushcart, motor vehicle, bicycle, or by a person with or without the use of any other device, or to require someone to pay a fee or to set, negotiate, or establish a fee before providing food, goods, merchandise, or services, even if characterized by the vendor as a donation.
This definition of “commercial vending” includes the practice of providing, free of charge, an item which may  not be vended, in exchange for the purchaser purchasing an item which may be vended as a condition for receiving the free item.
This definition of “commercial vending” does not include:
(i) Traditional expressive speech and petitioning activities, and the distribution of the following expressive items: newspapers, leaflets, pamphlets, bumper stickers, patches, and/or buttons.
(ii) The vending or distribution of the following items, which have been created, written or composed by the vendor or performer: books, audio, video, or other recordings of their performances, paintings, photographs, prints, or any other item that is inherently communicative and is of nominal value or utility apart from its communication.
Although an item may have some expressive purpose, it will be deemed to have more than nominal utility apart from its communication if it has a common and dominant nonexpressive purpose. Examples of items that have more than nominal utility apart from their communication, and thus are subject to the commercial vending ban under the provisions of this chapter, include but are not limited to the following: food, housewares, appliances, articles of clothing, hats, scarves, sunglasses, auto parts, oils, incense, perfume, crystals, rocks, geodes, lotions, candles, jewelry, jewelry holders, toys, stuffed animals, glass and metal pipes, and any vaping device.
(iii) A performance, which is hereby defined to mean: the act of engaging in any of the following activities: playing musical instruments, singing, dancing, acting, pantomiming, puppeteering, juggling, reciting, engaging in magic, creating visual art in its entirety, presenting or enacting a play, work of music, physical or mental feat, or other constitutionally protected entertainment or form of expression.
The term “performances” shall not include: (a) the application of substances to others’ bodies, including but not limited to, paints, dyes, and inks; (b) the provision of personal services such as massage or hair weaving, cutting, or styling; (c) the completion or other partial creation of visual art; (d) the creation of visual art which is mass produced or produced with limited variation; or (e) the creation of handcrafts, such as weaving, carving, stitching, sewing, lacing, and beading objects such as jewelry, pottery, silver work, leather goods, and trinkets.
(b) “Display device” means a freestanding table, rack, chair, box, stand, or any container, structure, or other object used or capable of being used for holding or displaying tangible things, together with any associated seating facilities….

Chapter 5.81 VENDING AND DISPLAY DEVICES ON CITY PROPERTY
(c) No person shall place, erect, or maintain a display device in an area for which a special event permit has been issued for a specific time or during periods in which safety enhancement zones are in effect.
(d) No person in an exempt zone may be accompanied by or in the custody or possession of a dog or any other animal.
(e) A display device may not exceed six feet in height.
(f) Neither a display device, nor personal items, nor the person(s) with custody of the display device may protrude onto the sidewalk beyond the performance space or tabling space in which the display device is permitted.
(g) No person may lay a cloth, tarp, or other similar material on the ground in an exempt zone.
(h) Except for (i) display devices and associated seating, (ii) hats, guitar cases, and other receptacles intended for collecting donations, (iii) personal belongings wholly contained underneath a table, no person may set down any item directly on the sidewalk or street in an exempt zone.

5.81.006 COMMERCIAL VENDING.
Whether inside an exempt zone or outside of an exempt zone, it shall be unlawful for any person or organization to engage in commercial vending, as defined above, in any of the areas listed in Section 5.81.003.

5.81.007 BENCHES AND STREET FURNITURE.
No person shall use any street furniture, including any bench, planter, utility cabinet, or other street furniture or structure permanently installed on public property, for the display, sale, or distribution of food, goods, merchandise, or services.