Getting a Good Night’s Sleep at City Hall with the Freedom Sleepers
by Alex Darocy (alex [at] alexdarocy.com)
Monday Sep 19th, 2016 6:27 PM
After a chilly series of summer nights for people on the street in Santa Cruz, temperatures have increased, and so has attendance at the Freedom Sleepers community sleepouts held at city hall. About three dozen sleepers made it through the night at the sleepout held on August 30, and attendance was nearly as high at the sleepouts organized on September 6 and September 13. Since July of 2015, the Freedom Sleepers have gathered to sleep at city hall one night a week to protest local laws that criminalize homelessness. September 13 marked the group’s 62nd sleepout. [Top photo: The Freedom Sleepers at Santa Cruz city hall at the 61st community sleepout organized on September 6-7. Scroll down for more photos.] 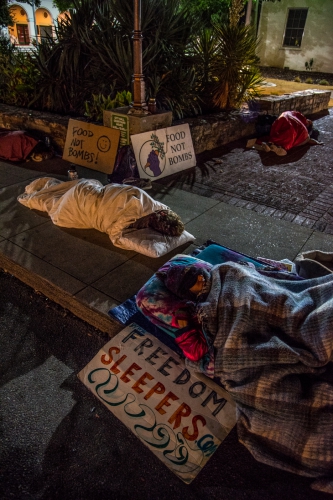 original image (935×1400)
Presently, the only location in downtown Santa Cruz where people on the street are able to sleep regularly as a group is at the weekly community sleepouts organized by the Freedom Sleepers. Homeless sweeps conducted by the Santa Cruz Police Department beginning in January of this year have for the most part cleared the downtown area of groups of people sleeping together in other locations, such as at the post office.

The sleepouts have attracted quite a bit of attention from the police. By sleeping at city hall, the Freedom Sleepers, some of whom have fixed housing of their own and some of whom do not, are engaging in a civil disobedience protest that directly violates the city’s camping ban, which outlaws sleeping anywhere in public between the hours of 11 pm and 8:30 am.

Many of the organizers of the sleepouts, which are organized as political protests, are hesitant to describe them as a completely safe place to sleep, but one of the founding Freedom Sleepers, Robert Norse of Homeless United for Friendship and Freedom (HUFF), has described them as “safe zones” that are a “safer” place to sleep.

“A lot of the homeless people have come up to several of us and said that this is the only night of the week they can get an uninterrupted night of sleep,” said Abbi Samuels, who is also one of the founding Freedom Sleepers.

“To me that’s so sad that there is only one night a week they can get 7-8 hours of sleep,” she said.

“I have been able to get a good night’s sleep too,” Samuels said of her own experience of sleeping at city hall with the Freedom Sleepers.

The primary demand of the Freedom Sleepers has been the repeal of the city’s camping ban ordinance, but Samuels believes some immediate relief for homeless people could be attained by amending the ordinance.

“I think people should be able to sleep at government and public facilities,” Samuels said.

“City facilities should be re-zoned,” she said.

Early on during the protests, the Freedom Sleepers attempted to sleep in the large lawn area located in the center of city hall’s courtyard, but sleepers in that area were subjected to citation during the many police raids the Freedom Sleepers experienced. The city hall courtyard is a no-trespassing zone and is closed to the public at night between the hours of 10 pm and 6 am.

Additionally, city staff has actively worked behind the scenes to make it more difficult for individuals to sleep at city hall. In October of 2015, the Parks and Recreation department began the process of removing the grass lawn at city hall and replacing it with spiny plants, new pathways, and rock features, as part of a landscaping project that has rendered the area hostile to those looking for a place to sleep.

“It’s horrible, it’s a subtle way to get rid of homeless people,” Samuels said. “I am so livid.”

She recalled how soft the lawn area was, and how people could sleep on it comfortably.

Samuels says she learned in October of 2015 that the landscaping changes were intentionally designed to prevent people from sleeping in the area from Don Lane, who was the mayor of Santa Cruz at the time.

The Freedom Sleepers had moved their primary sleep location to the sidewalk before the changes in the landscape were initiated by the city, and the sleepouts continued unabated, but the loss of the lawn area is a constant reminder and sore point for the group.

In addition to those looking to sleep with a group of people, the Freedom Sleepers attract a large number of people who are in need of life necessities and other basic supplies, such as food, clothing, and blankets or bedding.

On August 30, Santa Cruz Food Not Bombs estimates they shared 200 servings of food or more at city hall before that evening’s sleepout, which was in addition to food donations made by other organizations that day.

“We had to make more food,” said Keith McHenry of Food Not Bombs about the August 30 sleepout.

“I have never seen so many eager for food at a Freedom Sleepers sleep out. It seems like we are getting more people seeking food each week,” he said. “America is in crisis.”

The Freedom Sleepers have indicated the sleepouts will continue indefinitely at Santa Cruz city hall. The next sleepout is planned for the evening of Tuesday, September 20. 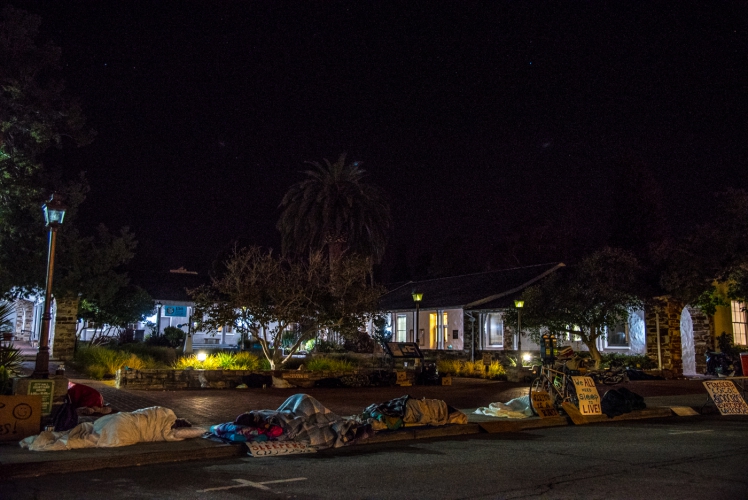 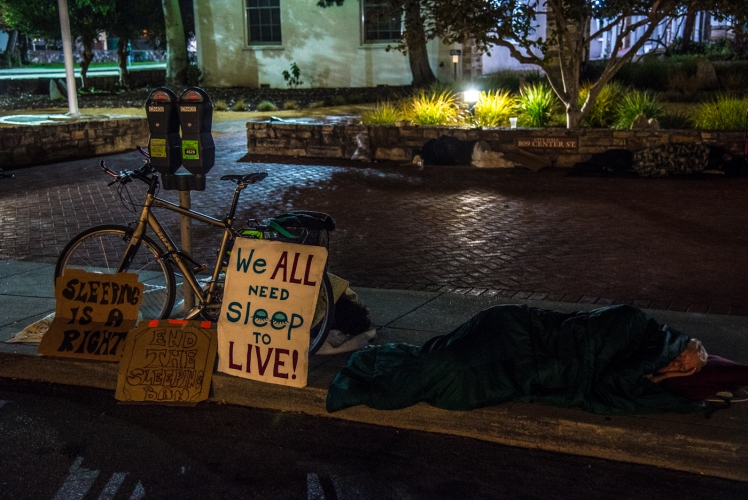 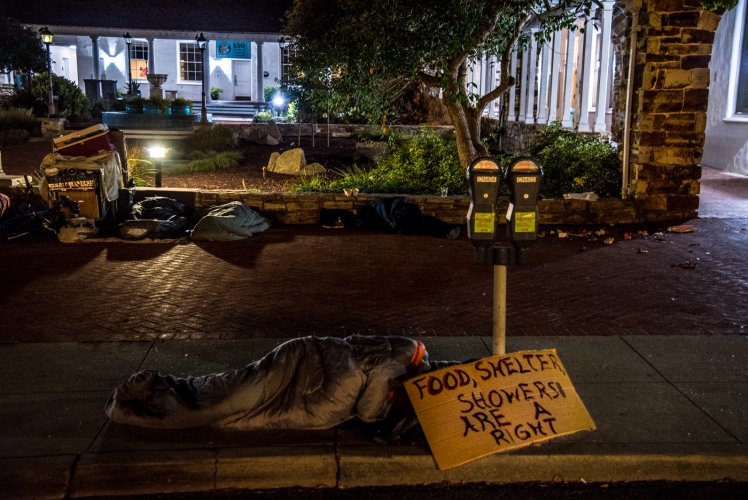 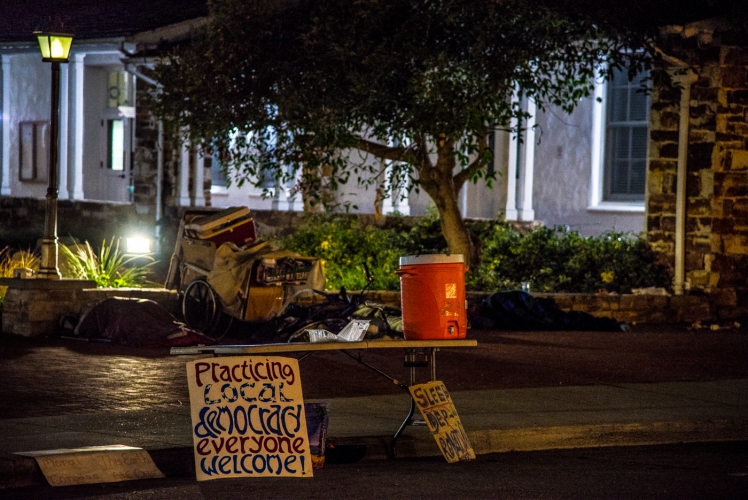 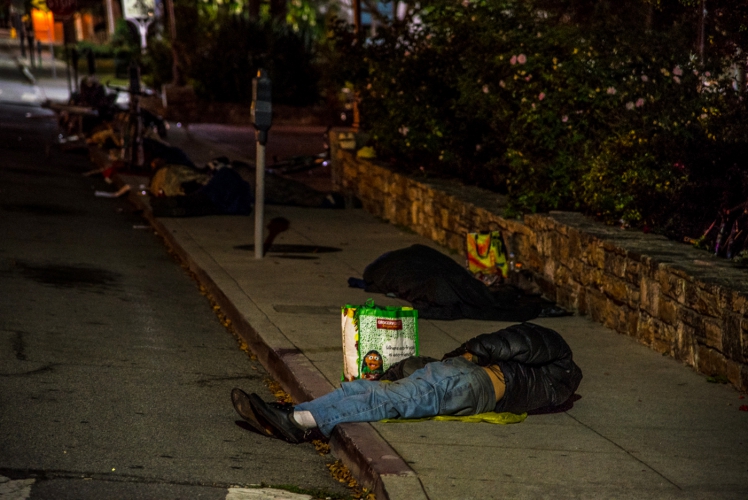 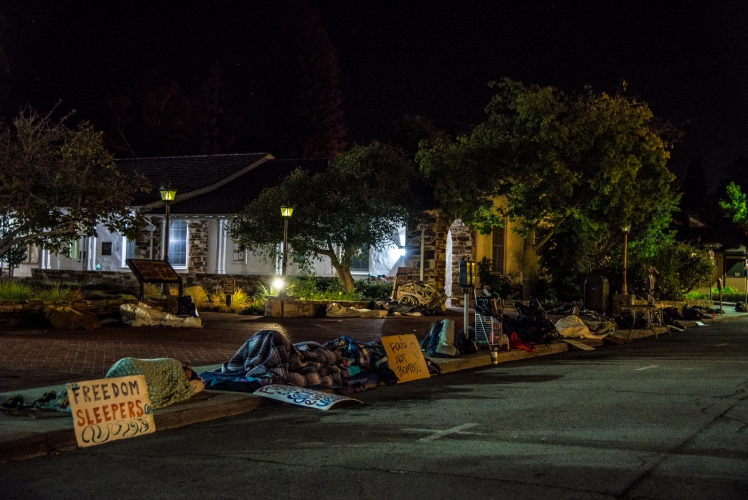