The Heroes encampment behind the Gateway-Ross area is under threat of “abatement” according to resolution passed at the 2-12-19 S.C. City Council. The flyer here describes some actions discussed by HUFF (Homeless United for Friendship & Freedom). 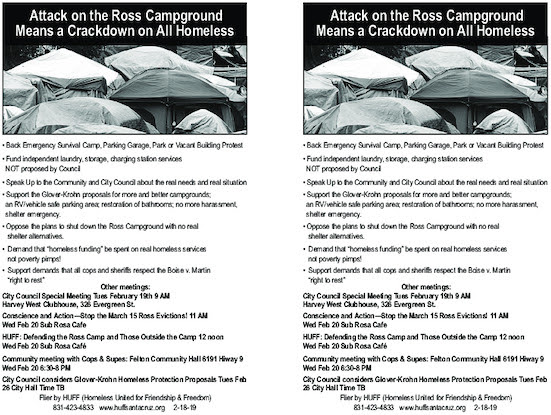 Download PDF (329.1KB)
Recently Chief Andy Mills of the SCPD visited Ross Camp and gave stern warnings to campers that they would all have to leave by March 15. Some would have to leave town and not return. No future encampments of this sort would be permitted.

There are no clear records of any Ross campers being housed elsewhere as was supposedly offered by city bureaucrats Susie O’Hara and Tina Shull at Council on February 12th.

Nor do Ross campers feel they want to leave for the proposed waiting lists, night-time only shelter, and other inadequate alternatives being spoken about (though not actually offered).

The federal Miller v. Boise decision, whose precedent is applicable here, bars cities from enforcing laws that criminalize sleeping, camping, resting, or lying where they have no shelter comprehensive alternatives.

Conscience and Action and HUFF will be meeting Wednesday at the Sub Rosa Cafe at 703 Pacific next to the Bike Church 11 AM to 1 PM. Join us.