Notes by Norse:  One story does not make a saga and the LAPD are not known for a kindler gentler treatment of homeless people there.  Whether the L.A. Times is doing damage control for the LAPD after its recent court losses is unclear to me.  But they’re certainly ahead of Santa Cruz with its fencing off of under-the-bridges sanctuaries, stay-away orders from parks, & ongoing attacks on homeless survival sleepers.

In L.A., we have seen recent court victories by the ACLU, attorney Carol Sobel, and homeless activists throwing out the City’s anti-homeless “no living in a vehicle” law.  In Santa Cruz, vehicle-dwelling Kate Wenzell (“the scarf lady) was mercilessly pursued by Officer “Bumbasher” Barnett and other SCPD sleepsnatchers–with charges finally being dismissed many months later after a campaign of intimidation.

The Desertrain decision is currently going to an en banc panel for review at the behest of a reactionary judge.  It does not directly overturn Santa Cruz’s “sleep after 11 in your vehicle, get a $157 citation; do it three times, face a year in jail and $1000 fine” law–MC 6.36.010a.

Unhoused Santa Cruz’s under assault by the SCPD and Parks and Recreation continue to report ongoing ticketing, “move on to nowhere” harassment, and property seizure.  A local ACLU proposal for a moratorium on all camping and sleeping citations at night hasn’t even gotten to City Council here due to more stalling from ACLU’s anti-homeless chair Peter Geldblum and the timidity of the Pleich majority on the Board.

City and county bureaucrats running the “Downtown Accountability Project” DAP (or Downtowners Against the Poor, as I call it) have yet to respond to Public Records Act requests.  These seek specific information on the particular “offenses” being targeted under the “100 Chronic Offenders” program.  This program is backed up by heightened security guard intimidation, “friendly fascism” from the ever-smiling “Hosts”, and back-up by packs of armed police officers who cluster quickly to deal with a yelling rebel,  but reportedly  decline to take complaints from homeless people.

The DAP program with a phony compassionate funding and zero money for long-term housing is being used to clear downtown Santa Cruz of homeless-looking people caught in the tripwire of anti-homeless laws and enforcement practices while easing the conscience of those wondering what happened to the old Santa Cruz.

Can L.A. be more “progressive” than Santa Cruz?  Or have attorneys there with guts grabbed the city’s bigots by the balls knowing their “hearts and minds” will shortly follow? 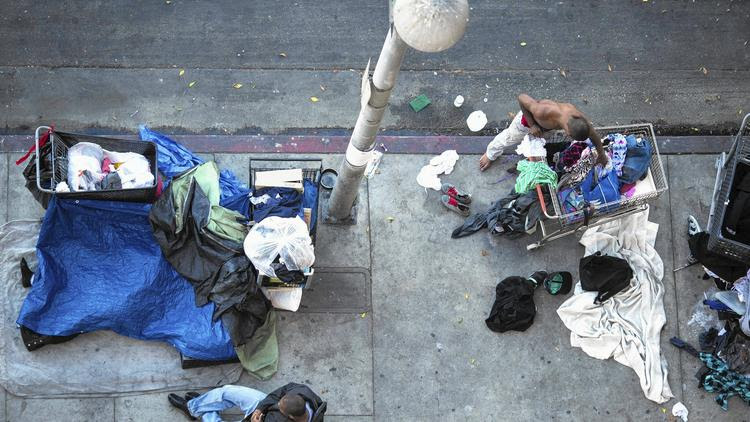 Los Angeles officials are developing a new strategy for taming pervasive homelessness on skid row, easing up on arrests for petty offenses while concentrating mental health, medical, housing and sanitation services in the long-troubled swath of downtown.

Officials say the effort involves cooperation between the city and county, whose inability to mesh hampered earlier homelessness plans in the 50-block neighborhood. The area now finds itself pinched by gentrification, with homeless people camping in tents just around the corner from trendy, upscale bars and restaurants.

The changes grew in part out of the frustration of skid row beat cops like LAPD Officer Deon Joseph, who issued an anguished cry for help to answer what he described as a mental health crisis.

That effort could debut as soon as Aug. 13, though officials said details are still being worked out. A new approach to policing has already begun. 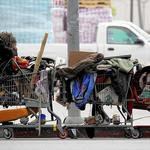 Under the direction of City Atty. Mike Feuer, who took office a year ago, police have largely stopped arresting people for resting or sleeping on the sidewalk, although they continue to ticket them. The LAPD Central Areastation, which patrols skid row, is trying to identify mentally ill homeless people who are particularly vulnerable to predators and track where mental health resources are going, block by block.

Police are meeting with community groups and exploring a three-step citation process, issuing written warnings before ticketing for minor infractions. 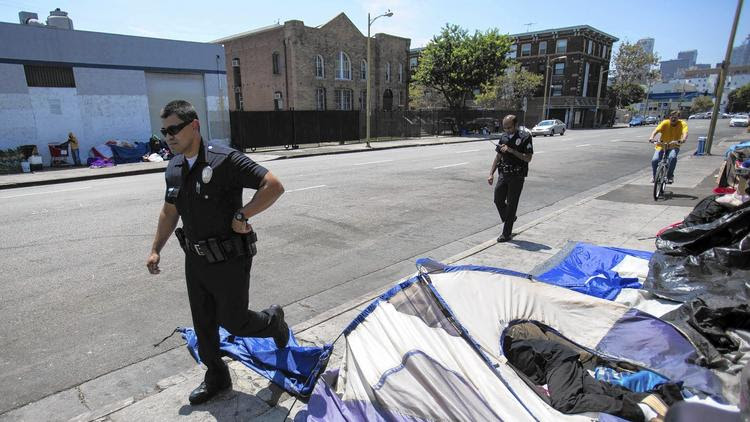 Authorities say they will continue to aggressively prosecute skid row drug dealers and violent criminals. The LAPD recorded 186 reports of major violent crime on skid row in the first six months of the year, up from 150 for the same period in 2013, a 24% increase, according to a Times analysis of police data.

But Feuer said he is looking for money to reinvigorate narcotics diversion programs and citation clinics to help low-level violators escape what activists call the “legal chaos” of multiple tickets and warrants, which can prevent them from getting housing.

The approach is a departure from the “broken windows” policing championed by former LAPD Chief William J. Bratton in New York and Los Angeles. Beginning in 2007, a 50-officer skid row task force called the Safer Cities Initiative went after infractions such as jaywalking, prostitution and littering to discourage more serious crime.

Activists say that drove homeless people into other neighborhoods or sent them bouncing back and forth between jail and the streets. Some business interests say civil rights litigation tied the police’s hands. The intensive services also planned for Safer Cities were never funded, officials said.

“On skid row, the windows already were broken,” Feuer said. “We have a much deeper and more profound situation to deal with.”

The new initiative is being overseen by Feuer, the LAPD and City Councilman Jose Huizar, and Mayor Eric Garcetti supports it, aides say.

Garcetti is expected to discuss a veteran homelessness strategy at a summit Wednesday in Century City with First Lady Michelle Obama.

“The big game changer here is this is a joint effort in which the city and county will truly work together,” said Sara Hernandez, Huizar’s downtown area director.

The police are walking around now, interacting with people instead of just arresting them.- Wendell Blassingame, runs free movie programs for skid row residents

County Supervisor Gloria Molina said, “It isn’t a one-shot thing, but it can work if we have continuity, consistency and put resources behind it.”
Some skid row community activists said they see a difference.

“There has been a great change,” said Wendell Blassingame, who runs free movie programs for skid row residents. “The police are walking around now, interacting with people instead of just arresting them.”

Others, pointing to the death of a mentally disturbed homeless man who fell from a rooftop as he tried to escape arrest, said things aren’t changing fast enough. Carlos Ocana plunged from a skid row building in May after a SWAT team shocked him with a stun gun. The incident is under investigation by the Police Commission’s inspector general.

After 40 years of failed cleanup plans, skid row suffers from reform fatigue, longtime observers say. But new strategies and funding are in play.

The city and county, under prodding from federal officials, have adopted a “housing first” strategy for the homeless, putting people in apartments and hotels regardless of their sobriety and mental status. The U.S. Veterans Affairs and Housing and Urban Development departments are funding permanent housing with mental health and substance abuse treatment for the residents.

Since 2008, L.A. County has committed $118 million to 41 housing developments with a total of 2,066 residences, including 918 set aside for people who are mentally ill and homeless, said Maria Funk, a district chief in the county’s mental health department.

The funding came through Proposition 63 — a “millionaires tax” for mental health assistance that California voters approved in 2004 — and other state, federal and local sources.

The county Department of Health Services has an $18-million fund, made up of county money and $4 million from the Conrad N. Hilton Foundation, to subsidize rents for homeless people who cycle in and out of emergency rooms.

“We have a keen interest in identifying those people, whether they are in our hospital at a given moment or on the streets in skid row, and help get them connected to services and housing,” said Marc Trotz, director of the department’s Housing for Health division.

“So many people on skid row have so much passion,” said LAPD Lt. Billy Brockway, the current head of Safer Cities. “We just have to harness it.” 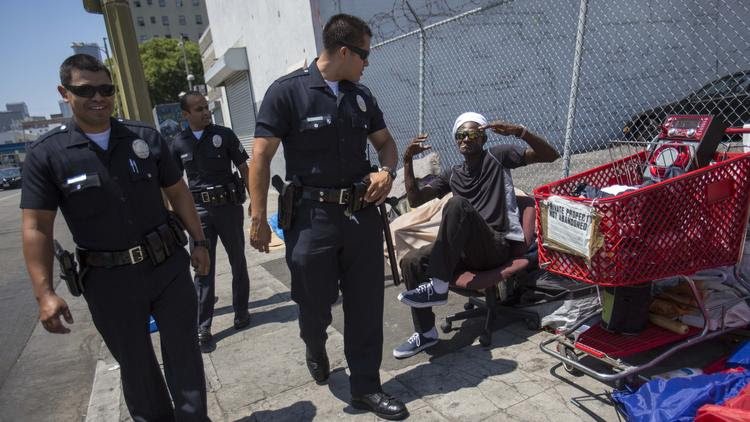