NOTES BY NORSE:   In Santa Cruz HUFF began turning in damage claim forms demanding $2500 from city sleepbusters.  The first claim forms were presented to the City Clerk’s office during the protest Tuesday night against the SCPD’s  rescue-n-riot Bearcat Armored Personnel Vehicle.   The restitution is demanded for each instance where a ranger or police officer has wakened a homeless person and demanded they leave–invariably without giving them a legal place to go and often with a $157 citation. Bring your sleeping and camping tickets to the Food Not Bombs tables on Saturday and Sunday at 4 PM near the main Post Office in downtown Santa Cruz.
We don’t know how Small Claims Court “judges” will treat these lawsuits, but at least homeless folks and their advocates will get a chance to face their abusers.
However, the attacks on homeless survival encampments in Santa Cruz are not likely to stop.  The hyperpolicing of parks and other greenbelt areas continues with no increase in shelter, no warming centers opened, and no acknowledgment of the misery and injustice caused by these sweeps.
The new “Stay-Away” law in the parks and other large swaths of Santa Cruz goes into effect on February 12th or thereabouts.  Read about these new “Homeless–Disappear or Go to Jail” laws at https://www.indybay.org/newsitems/2015/01/09/18766602.php    Specifically, the text of the monstrously expanded Stay-Away law is at https://www.indybay.org/uploads/2015/01/09/final_law.pdf and the older City Hours of Operation and abusive “Disorderly Conduct” laws are at  https://www.indybay.org/uploads/2015/01/09/p_and_r_codes_shorter.pdf.

by Mike Rhodes ( mikerhodes [at] comcast.net )

Caltrans says this homeless encampment is on public (State of California) land. If these homeless people can’t live here (on the people’s land), where can they live?

800_pan_of_camp.jpg
original image ( 5317×1608)
A group of 25 (+ or -) homeless people living in an encampment near highway 140 and Baker street in Merced are being threatened with eviction by Caltrans. Notices were posted on Friday, January 23 for the Monday, January 26 at 8 a.m. eviction. The notice posted by Caltrans says that “all personal property and camp debris is to be removed by the time and date noted below.” The notice continues “any personal property left at this site after this time will be considered abandoned.”

The residents in the encampment, some of whom have lived there for over a year, don’t have any place to go. There are no safe and legal camp sites for the homeless in Merced. Several of the residents are elderly and some are sick and unable to move their property, even if there was some place to take it.

Marilyn showed me inside her shelter today and it is obvious that she is not going to have her property moved by tomorrow morning. The notice does say that “any personal property not disposed of will be stored for ninety (90) days.”

Supporters of the homeless will be at the encampment on Monday morning to video the Caltrans operation and make sure that homeless people’s rights are not violated.

http://fresnoalliance.com/wordpress/?p=1313
§Marilyn showed me some of her treasures she has stored in her shelter
by Mike Rhodes Sunday Jan 25th, 2015 4:37 PM 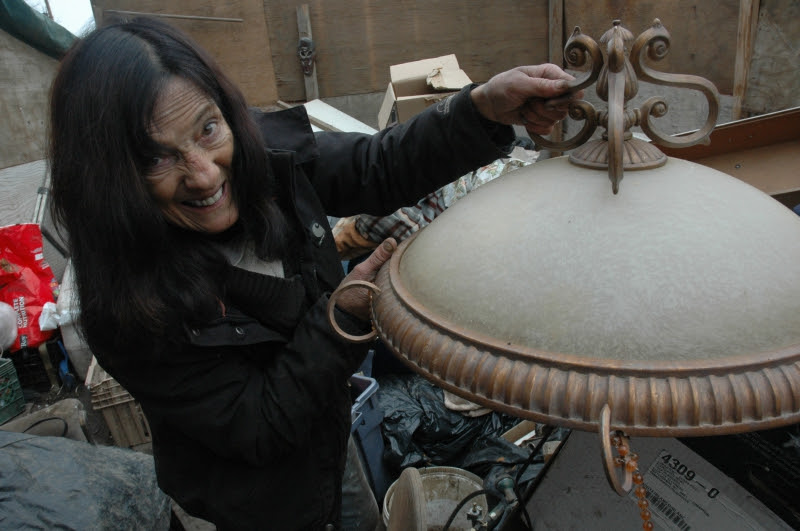 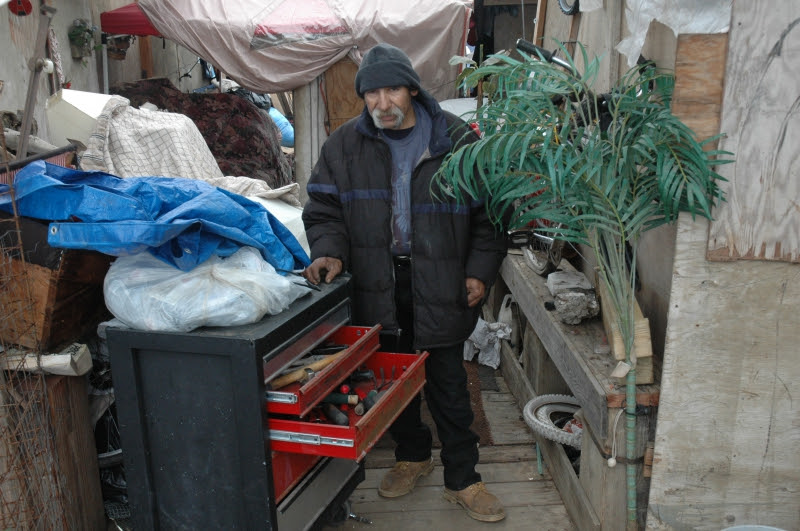 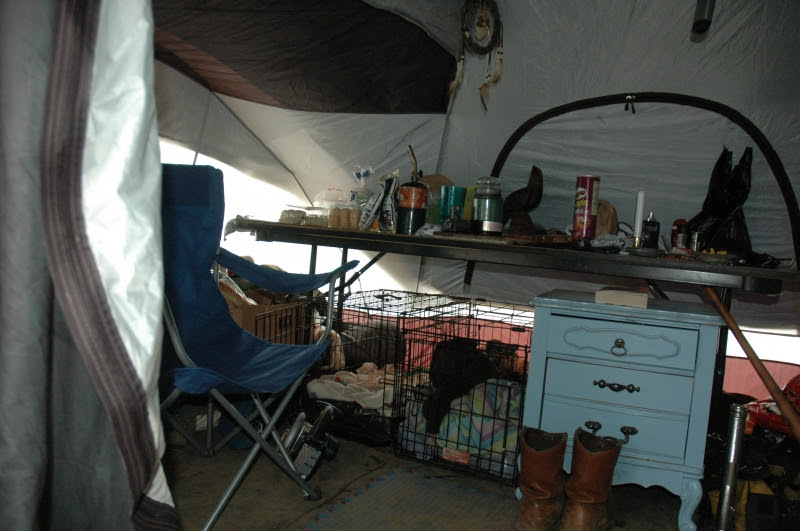 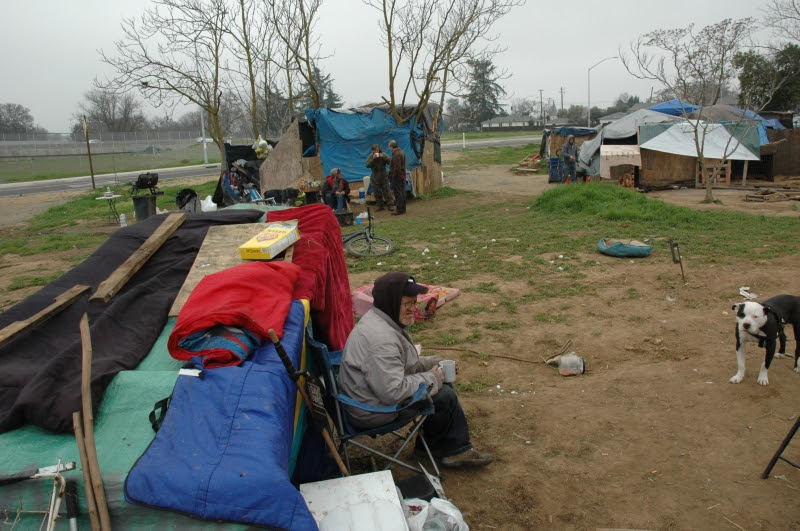 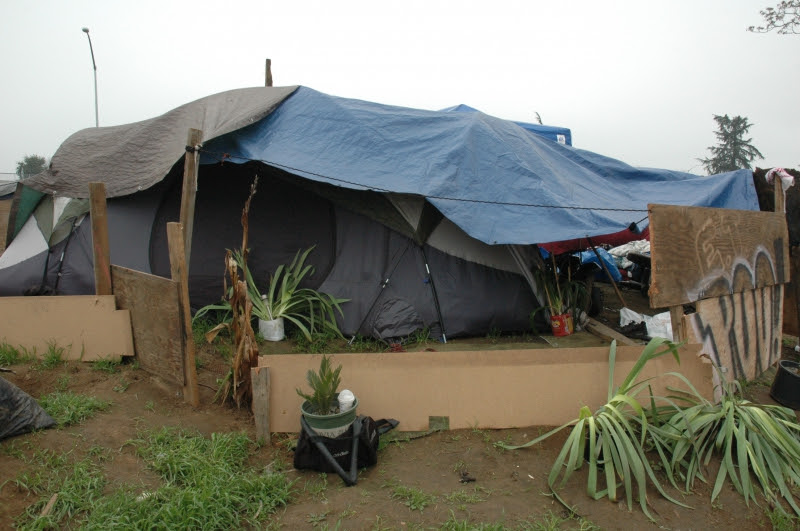 The California Department of Transportation on Thursday posted notices at an encampment near Kelly Avenue and Highway 140 on the east side of Merced ordering the homeless illegally camping there to leave before crews clear the area Monday.

The notice went up on the same day that volunteers assisted the county’s Continuum of Care in counting the homeless in Merced County, a count required by the Department of Housing and Urban Development.

Though the official numbers from the count aren’t expected to be released until next month, the Continuum of Care member heading the tally said there are more homeless people in the county than last year at the same time.

Those living in encampment near the Bradley Overhead, an overpass maintained by Caltrans, said Thursday they may have been able to find other shelter if they’d been given more notice.

Gail Henslee, a 60-year-old woman who’s lived in the encampment for two months, said a few days is not long enough to move. “We have nowhere to go, and they don’t care,” she said.

The notice says the area will be cleared because of illegal camping and dumping. Homeless advocates estimate that 25 people call the encampment home.

Henslee said she’s called a lawyer to study her options, but in the meantime admits she won’t have any choice but to leave before the camp is cleared out beginning at 8 a.m. Monday. She said she didn’t know about the plans to clear the camp until a Caltrans employee warned her earlier this week.

Entering a local shelter, such as the one D Street, is not an option for her, she said, because staff there would not allow her to bring her 11-year-old dog.

Being forced from one place to another is nothing new, said Brent Shirley, who has lived in a makeshift structure near the overpass for about six months. “There’s no closure for all of this – none,” the 52-year-old said. “It’s just a vicious cycle we’re all living in.”

A handful of tents and makeshift shelters make up the encampment, which can be seen by drivers who travel the highway to and from Yosemite National Park.

Caltrans spokeswoman Angela DaPrato said the California Highway Patrol will assist in the removal early next week, when crews will throw out anything left behind. Those in the encampment can identify possessions they plan to come back for, according to the posted notice, and Caltrans will store the items for up to 90 days.

Representatives from the Merced County Human Services Department were on hand Thursday to speak with those living near the overhead after the notices were posted.

Renee Davenport, who headed up the tally for Continuum of Care, said she appreciated that Caltrans held off from destroying the camp until after the count. She said several people in the camp are elderly or suffer from medical conditions that keep them from working.

Davenport said she is doubtful that many of them would get housing relatively soon, because the system does not work quickly.

Moving them from the encampment is not a long-term solution, she said. “They’re just going to go somewhere else in the street.”

The encampment has been there for about two years, Davenport said. It started to receive extra attention after the $41.2 million Bradley Overhead project was completed in November.

There were 768 homeless people in Merced County, including 21 children, based on the 2014 Homeless Count and Survey.
Davenport said this year’s count found more homeless people, but she declined to report the exact numbers. Urban Initiatives, the nonprofit that oversees Continuum, said it expects to be able to report the numbers in February.

Volunteers will continue with a homeless survey Friday. The questionnaire is an attempt to better track the demographics of the homeless, with questions designed to find out how many of them are men, women, children, veterans, HIV positive, mentally ill and so on.

Those leaving the camp will have to find a place to stay other than the warming shelter that’s been used during the past couple of winters. The Merced County Rescue Mission said this month that it was not planning to open the shelter, which is essentially a tarp tent filled with beds and space heaters.

Also this week, during a regular meeting, the Merced City Council instructed city staff members to look at the cost of opening a public building or taking over control of the city’s warming shelter. About $7,200 in Department of Housing and Urban Development money during the past two years has gone toward the purchase of the tent and the equipment inside, as well as paid the utility costs, according to the city’s Housing Department.

City staff members said a report could be ready in the coming weeks.

Plans to clear a homeless encampment came to fruition Monday morning, as Caltrans workers used heavy machinery to begin clearing the camp near Highway 140, where an estimated 25 people lived in tents and makeshift buildings.

The work started shortly after 8 a.m. in the mud and grass field near where Kelly Avenue meets the Bradley Overhead. Caltrans posted notices on Friday that ordered the homeless to leave the area by Monday morning.

California Highway Patrol officers, who were on hand to provide security, said the people in the camp peacefully complied with the notice. One man who lived in the camp was taken away by an ambulance after he complained of chest pains.

Many of the residents of the camp were still packing up when the crews arrived. Steve Mentz, 51, hurried to secure his dogs and try to save as much of his structure as possible.

As he left the camp, he said he didn’t know where he would spend the night, as he’s been run off before. “They’re making it where there’s nowhere to go,” he said.

A resident of the camp for about eight months, Mentz said he’s legally blind and hoping to get disability benefits soon. He was aware of the looming destruction of the camp, he said, but didn’t have anywhere else to go because the shelters in town don’t allow pets.

She said the breaking up of the camp highlights what she sees as a lack of services for homeless people in Merced and the county. “To do this in the middle of the winter – and there’s no warming shelter – there’s no excuse,” she said.

Davenport was in the camp Monday morning helping people pack up.

People who left the camp would have to find alternate housing from the warming shelter that Merced County Rescue Mission opted not to open this year. About $7,200 in Department of Housing and Urban Development money during the past two years has gone toward the purchase of the tent and the equipment inside, as well as paid the utility costs, according to Merced’s Housing Department.

Merced City Manager John Bramble said his staff is still looking into the cost and feasibility of opening a public building or taking over control of the warming shelter tent.

That same day, U.S. Housing and Urban Development Secretary Julian Castro announced groups that work with the homeless throughout the central San Joaquin Valley received about $10 million to help those without shelter. Merced County’s Continuum got seven grants worth $579,193.

Back in Merced, Caltrans crews took down some of the makeshift structures in the camp by hand, folding up tarps and bagging trash. The buildings made with wooden pallets snapped and splintered as they were knocked over by heavy machinery. Some of the homeless got help moving from friends with cars, while others pulled their belongings on a cart behind a bicycle.

A handful of people arrived to the camp with signs saying the homeless there were being “persecuted.”

According to the last year’s homeless count by the Merced County Continuum of Care, there are 476 homeless people in Merced. Continuum conducted the 2015 count this month, but has not reported the numbers yet.

Caltrans agreed to store possessions for up to 90 days for those who lived in the camp. Anything else left behind was destined for the dump.

Angela DaPrato, a spokeswoman for Caltrans, said the department had been planning to clear the camp for a few months but waited until after the holidays and last week’s homeless count to go through with the plans.

She said the cleanup would continue Tuesday and crews were not certain how many more days it would take. “They didn’t anticipate how much work it would be,” she said.