NOTE BY NORSE:  Santa Cruz, of course, has its own “blanket ban” (MC 6.36.010b) which is still used (though less frequently than the “crime” of sleeping(MC 6.36.010a), or that of setting up a tent against the rain and cold (MC 6.36.010c).  A tip of the hat to Steve Pleich for bringing this story to our attention on his website.  Now if he (and others he’s recruited to the Board) would only draw the attention of the Board of the ACLU–where has been vice-chair for many months–I’d feel a bit of warmth against the cold.    Not to mention the illegal theft of homeless property, the destruction of homeless camps, the ordinances and police practices driving homeless people from the downtown, the parks, and other supposedly “public” areas.

January 23, 2014 – Nathan Monk, Alistair McKenzie, Mike Kimberl, and Jeremy Bosso spoke to Pensacola City Council asking them to review and repeal sections of the controversial “camping” ordinance passed this last summer, particularly those sections that make it a “crime” to keep warm with a blanket-posing a tremendous health and safety risk to the homeless. Councilwoman Sherri Myers said she will work to get the issue back on the agenda for next week’s meeting. Note that temperatures are supposed to drop down to the 20s tonight. If you’re interested, I’m at about the 13:50 mark in this video, saying: 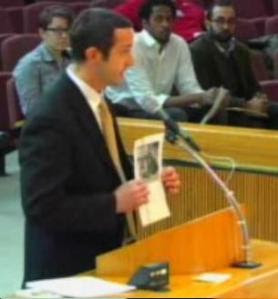 “Good evening, City Council. I just wanted to bring to your attention, WEAR ABC News posted a sort of Public Service Announcement, if you will, just reminding people with this cute little meme on their Facebook page. It’s a cute little dog, and it says “If it’s too cold for you, it’s too cold for them. Please bring your pets inside. Please share to get out this message.” I would just like to say that I fully agree with this, that if it’s too cold for you, it’s too cold for your pets. But I would also like to ask that the City Council extend that same courtesy to our fellow human beings. The temperatures have reached the teens recently. It’s expected to be a hard freeze tonight. And because of that, I’d like to ask the Council to respectfully reconsider the “camping” ordinance that I believe several other people have mentioned, that does prohibit sleeping with a blanket, a sleeping bag. I think we should extend that courtesy to our fellow humans. I mean, we do it for the animals, and I think we should respect life at all stages.”


The “camping” ordinance was passed by the City Council during the summer of 2013, along with a series of related ordinances relating to the homeless. The following Council members supported the controversial homeless ordinance(s): P.C. Wu, Andy Terhaar, Larry B. Johnson, Brian Spencer, Jewel Cannada-Wynn, Megan B. Pratt. These council members opposed the ordinance(s): Sherri F. Myers, Charles Bare, Gerald Wingate.

Ordinance 17-13 AN ORDINANCE CREATING SECTION 8-1-22 OF THE CODE OF THE CITY OF PENSACOLA, FLORIDA; PROHIBITING CAMPING AS DEFINED ON ALL PUBLIC PROPERTY OF THE CITY PROVIDING EXCEPTIONS; PROVIDING FOR SEVERABILITY; REPEALING CLAUSE; PROVIDING EFFECTIVE DATE.
WHEREAS, the City Council of the City of Pensacola, Florida hereby finds that in order to provide for, secure and promote the aesthetics, sanitation, public health, and safety of its citizens, it is necessary and in the public interest to adopt an Ordinance prohibiting in part and regulating the conduct of camping on public property, as defined, within the city limits.

NOW, THEREFORE, BE IT ORDAINED BY THE CITY OF PENSACOLA, FLORIDA: SECTION  1. Section 8-1-22 of the Code of the City of Pensacola, Florida is hereby created to read as follows:

Sec. 8-1-22 Camping prohibited; exceptions
(1)    For purposes of this section “camping” is defined as:
(a)    Cooking over an open flame or fire out-of-doors; or
(b)   Bathing in public for purposes of personal hygiene; or
(c)    Sleeping out-of-doors under one of the following circumstances:
(i)                  Adjacent to or inside a tent or sleeping bag, or
(ii)                Atop and/or covered by materials such as a bedroll, cardboard, newspapers, or
(iii)               Inside some form of temporary shelter
(2)    Camping is prohibited on all public property, except as may be specifically authorized by the appropriate governmental authority.
(3)    Camping is prohibited on all property in the City used for residential purposes; provided, however that camping is permitted on such property with permission and consent of the property owner.
(4)    An individual in violation of this ordinance, who has no private shelter, shall be advised of available shelter in the City of Pensacola or Escambia County, in addition to any penalties of law.

FOR VIDEO AND COMMENTS GO TO http://www.forwardprogressives.com/florida-ordinance-makes-illegal-homeless-use-blankets-protect-weather/

I think most of us can agree that life isn’t easy.  So many Americans live in a perpetual state of fear about the future.  Going paycheck to paycheck, one long string of bad luck away from total catastrophe.  I remember when I was a server thinking sometimes that all it took was one wrong step, breaking my ankle, and I would have been absolutely screwed.  What good is a server if you can’t walk?

Our lives can change in an instant.  We’re brought up in different environments and have to overcome different obstacles.  It’s why I try not to judge people (outside of their willful ignorance) because I really don’t know what they’ve had to overcome in life or what led them to their particular hardships.
This is especially true when I encounter a homeless person.  Granted some homeless are in their situation in life due to their own decisions, but many aren’t.  And like most things in life, once you dig yourself into that kind of a “poverty hole,” it’s really hard to get yourself out of it.

The last thing I’d ever support, or want to see happen, is for a city to pass laws that almost seem to be picking on homeless people.  Laws or ordinances that make the lives of people who already live in extremely challenging situations even more difficult.
But that’s exactly what’s happening in Pensacola, Florida.

Right now there’s a “camping ordinance” within the city that basically makes it illegal for anyone outside to cover themselves with a newspaper or blanket in cold or otherwise inclement weather.

It’s ridiculous.  Before even getting into the impact this has on the homeless, let’s just look at how this could impact an ordinary citizen.  Say you’re caught outside in the rain with only a newspaper to keep you dry while you wait outside for a bus – technically that’s illegal.

But of course the real people this ordinance will impact are the thousands of homeless people who are left freezing outside (Florida has had an abnormally cold winter this year) who have to make the conscious decision to break the law just to keep themselves warm.

Isn’t it hard enough just being homeless?  Do we really need to make their lives even more difficult?  Hell, isn’t this flat-out inhumane?  To tell someone who has nowhere to go, no home to keep warm in, that they’ll be breaking the law if they dare try to shield themselves from freezing temperatures and high winds – it’s reprehensible.

Every person who’s homeless has their own unique story as to why they’re in their current situation.  Again, some are there because of their own volition and choices in life.  But many suffer the plight of homelessness due to circumstances beyond their control.  And let us not forget that many of these individuals are war veterans suffering from PTSD or people who were born with other mental illnesses that (since birth) have prevented them from ever standing a chance at assimilating into society.

But this isn’t about judging why someone is homeless.  This is about common sense and basic human decency to treat some of those who are most vulnerable in our society with at least a shred of compassion.

Next week, the city will be considering amending the City Code to remove this awful ordinance.  I would encourage everyone reading this to contact the Mayor of Pensacola, Ashton J. Hayward, and let him know that this lack of basic humanity must stop.