Looks like the threat of disinvestment from Granite Construction may have discouraged them from bidding for the anti-immigrant Trump wall on the border (Item #2 7 PM Agenda).     Council may also support disinvestment from Wells Fargo for its support of the Dakota Access Pipeline (Item #3 7 PM Agenda).  However at Tuesday night’s 4-25 Council meeting the Council will still be considering a “cost-effective” fence along the levee along with increased cops, surveillance cameras, and lighting to add to the “no loitering” enforcement, forbidden to sit rules, and high-pitched anti-homeless “Mosquito” boxes along the levee.

BAD NEWS AT 7 PM
Agenda item #1 on the 7 PM Agenda of the last City Council meeting in April has the following item up for a vote:

TO READ THE STAFF REPORT: Go to item 1 on the evening agenda at http://scsire.cityofsantacruz.com/sirepub/mtgviewer.aspx?meetid=856&doctype=AGENDA .

The flowery language masks the reality: $138,000 for more cops and copcars (technically Rangers and their Rangermobiles) to move along and drive away the poor from the levee area, $50,000 for “security” cameras, $24,000 for lighting upgrades, and $5000 for a “Public Engagement Summit”
Also on the conveyor belt is proposed fencing along the levee, as they look for a cheaper contractor.

The previous “Summit” in March had no representation from renters, the unhoused, civil liberties groups, minority interest groups, or students. The proposal is being pushed by the true bosses of the City Martin Bernal and his underling Scott Collins–City Manager and Deputy City Manager respectively who remain unaccountable to the community and receive no regular public scrutiny by any independent oversight body.

THE POLITICAL LANDSCAPE
Recent mass marches have highlighted opposition to Trump’s misogyny, his immigrant hostility, his tax returns concealment, and his “alternate science” weltanschauung and the upcoming Trump’s Climate Confusion walk next Saturday. There is little if any acknowledgement of the broader collusion or indifference of local politicians on prior policies which set the stage for Trump’s toxic expansions.

The most obvious aspect of this is the local silence in the face of recent bipartisian saber rattling and hypermilitarism escalating foreign wars that thrived under Obama (and that Clinton vowed to continue). Local opportunist Democrats are heightening the danger with ramped up Russophobia and McCarthyite hysteria to justify Clinton’s defeat and push Trump out of power (so we can get Pence?).

The same local misfocus is also true of any pressure for politicians to be locally accountable. However, item ##2 and 3 on the evening agenda involving divestment from Granite Construction and Wells Fargo on the evening agenda do indicate a positive change–though again, prompted by distant national issues and heavy Democratic Party mobilization “against Trump”.

Where there is no improvement–in fact, further deterioration, is around poverty, houselessness, and local policing.

FENCING FOLLY AN OLD STORY
The City’s involvement with the recent chain link fence at the downtown post office has been unclear in spite of e-mails from Councilmembers Mathews and Niroyan hostile to Food Not Bombs weekend meals there.

The post office fence is likely part of the drive against homeless sleepers under the eaves at night and Food Not Bombs patrons on the steps during the weekend. The alleged “Construction” supposedly being undertaken there has yet to appear–and it’s been weeks.

The whole thing is reminiscent of the phony “plant restoration” pretext given to rope off the levee space near the Soquel St. bridge across from CVS back in 2010. See “City runs off Drum Circle again, cuts down trees and cements AREA CLOSED signs along levee” at https://www.indybay.org/newsitems/2010/07/29/18654907.php .

To register your opposition to the City Council’s latest gentrification move on the Levee, e-mail them at citycouncil [at] cityofsantacruz.com . To consider more direct action protest, check out the HUFF (Homeless United for Friendship & Freedom) meeting at 11 AM-1 PM Wednesday at the Sub Rosa Cafe at 703 Pacific, or give a call to 831-423-4833.

THE STRUGGLE CONTINUES
Meanwhile outside the clacking tongues and prefabricated agenda of the Council, poorer members of the community will be huddled in sleeping bags and blankets. The Survival Sleepers–at City Hall every night for the last month at least–will be joined by the Freedom Sleepers, as they are every Tuesday.

Finally, and perhaps most important, lend what support you can to the nightly Survival Sleepers–those who suffer nightly harassment for simply sheltering themselves from the rain and cold under the eaves of City Hall. They risk citation, arrest, and property seizure to assert their own rights, defend their own health and safety, and support the rest of those unhoused community. They do what some of us merely write or talk about. 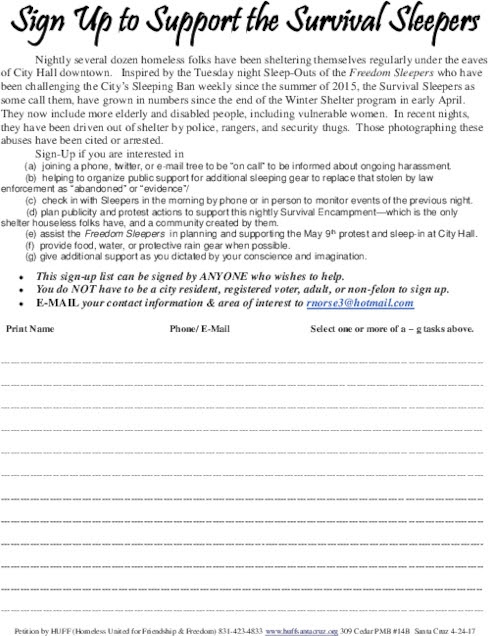