NORSE’S NOTES:  Santa Cruz, under the Mathews City Council, has faced a severe attack on those whose “affordable housing” is an RV with the passage last year and again this year of the city-wide nighttime RV parking ban.  This is another in a series of anti-homeless measures based on the false and vicious mythology that a large proportion of homeless folks are criminals, threats to children, etc.  It’s a fantasy pushed by influential economically distressed middle-class residents along with police, real estate speculators, and downtown business interests which has resulted in a string of repressive laws–in addition to the City’s traditional and routine Sleeping Ban–which makes any  sleep 11 PM to 8:30 AM, even in one’s own legally parked vehicle, a crime.

A successful appeal to the Coastal Commission heard last summer has delayed the implementation of Santa Cruz’s “no parking midnight to 5 AM” law now on the books but supposedly not being enforced  [See http://www.santacruzsentinel.com/environment-and-nature/20160810/coastal-commission-votes-against-santa-cruzs-rv-ban and ” Unexpected Victory at Coastal Commission” https://www.indybay.org/newsitems/2016/08/11/18790030.php .   There are however mixed reports of police reportedly “cracking down” and driving vehicularly housed residents out of town into the County.  Meanwhile, the County has passed an even more repressive RV ban in March, which impacts five times as many people (since the County’s population is five times larger than the City’s).  Their ban [County Code 9.70.620] lasts all night and, like the City’s stalled ban, requires a permit connected to a resident or hotel.  It also requires parking near the residence or hotel.   Tickets so far have been very limited, but I have raised the issue with any enforcement at all with the apparently unsympathetic staff of the Coastal Commission–so far without results.

The “liberal” Sheriff Jim Hart reportedly has a “Flashlights at the Park” program which invites private hate groups and eager vigilantes to join deputies in stalking the parks at night in search of “illicit” behavior.  Since survival sleeping and camping is probably the most prevalent crime, the target and impact this policy seems pretty obvious. [See https://www.facebook.com/SantaCruzSheriffsOffice/?fref=ts September 17]

In San Rafael as well, RV residents are fighting back.   See http://www.marinij.com/opinion/20160908/marin-ij-editorial-san-rafael-should-take-another-look-at-rv-ban.  For a lengthy discussion of the Santa Barbara situation from activist Peter Marin, listen to Free Radio Santa Cruz archive at http://radiolibre.org/brb/brb160918.mp3 [37 minutes into the audio file].

So far in the Santa Cruz City Council forums, I’m not aware that the issue of the harassment of RV dwellers and potential eviction of poor families has been made a high priority issue–or an issue at all for the would-be chairwarmers.    (See article below)

Nothing EZ About Living In an RV 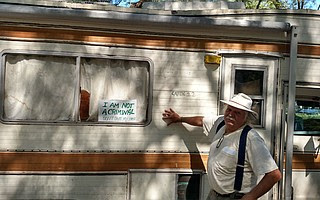 PUSHBACK : A Santa Barbara resident since 1998, artist Richard Paluch does not want to be forced out of town.

As insurrectionary moments went, it was uncommonly sweet. About 20 people — dwellers of cars, trucks, and RVs — gathered last Saturday morning at the public parking lot by Castillo and Carrillo streets for doughnuts, coffee, and some urgent political strategizing on how they can stay in Santa Barbara. They’re scrambling to head off a push by City Hall to ban recreational vehicles from city streets.

Included was a family of nine from Mexico living in two vans, a Vietnam vet with 47 parking tickets he’s received for his pickup truck and makeshift chalet, and a defiant beachfront artist who blows glass into bracelets in his well-worn RV, for which all necessary permits have been obtained. Some, like the artist, talk of their struggles with City Hall — in his case five court cases that he took to trial. Most, however, came to listen.

Doing much of the talking was Deborah Barnes, a veteran guardian angel of the streets and parks claimed by those on the economic fringe, as well as City Councilmember Cathy Murillo. Murillo and Barnes are hoping to dissuade the City Council from pushing ahead with the ban. They’ve been exhorting RV dwellers to show up at council meetings and explain their experiences. Likewise, they are bountiful with suggestions on how to be good neighbors: Don’t congregate with other RVs, don’t create a nuisance, clean up, and be quiet.

Not present was Peter Marin, whose 35 years of activism on behalf of the homeless qualifies him as the undisputed silverback of the cause. Marin is quicker to threaten City Hall with lawsuits, and he’s got enough legal firepower on his speed dial to make the threat legit. He’s sued the city before over RV rights, proved his relentlessness, and is probably one of six people who really understands the legal intricacies of what’s come before.

No one knows the real number of people living in RVs. But Marin and Barnes agree it’s in the hundreds. “Imagine what would happen if some landlord threatened to evict 200 families,” said Marin in a previous interview. “There would be a hue and cry. That’s what we’re looking at here.” Kristine Schwarz, who runs the Safe Parking Program — providing licensed parking spaces for 115 car and RV campers — estimates the total number of those in automotive encampment at 720. Her program may have garnered rave reviews in national media outlets, but last year, the county supervisors reduced her funding by about $100,000. As Schwarz figures out where to cut her own budget, she’s dealing with 28 seniors, 10 families with kids, two mothers with adult daughters, and many who qualify as chronically homeless.

For the past 15 years, City Hall and the RV dwellers have played a legal game of cat and mouse. The courts have ruled RVs can be regulated as to when and where they can park but only if street signs are erected first. When the signs go up, the RVs move elsewhere, sparking a new round of complaints. Last Thanksgiving that happened yet again, and RVs that had parked down by the railroad tracks in the Funk Zone migrated into the politically influential upper Eastside neighborhood. At the same time, City Attorney Ariel Calonne was attempting to wrestle the city’s patchwork of homeless ordinances into some constitutionally defensible coherence. And Santa Barbara’s astronomically high rents were contributing to the swell of economic refugees hunkering down in their four-wheel abodes.

On October 18, the council will review an ordinance to ban RVs from all city streets unless the owners have obtained the requisite permits. City streets are not designed or equipped to accommodate the width of RVs; their presence can create a serious pinch in lane widths. Barnes, Murillo, and Marin are pushing for a massive expansion of the Safe Parking Program to handle the obvious need. But programs like that require the “residents” to be up and out by the crack of dawn. “It’s like being evicted every day,” said one of the people at last Saturday’s gathering.

If Marin is prepared to get tough, Barnes is hoping to humanize the issue. Not all RV owners are the wine-chugging inebriates of urban folklore. She said she knows nine nurses at Cottage Hospital who live in RVs. Last weekend, she prepared those assembled for a State Street RV parade she’s organizing for next Saturday. Mostly, the group spends its time making signs to hang in the windows of their movable homes. “I Live Here Too,” declared one. “This is My Home,” said another, and “Please Let Me Exist.”