A crowd of homeless supporters showed up at last night’s ACLU meeting (outnumbering the Board by nearly 2-1 at one point). In a series of speeches (to be rebroadcast on Free Radio Thursday night), they urged the local ACLU to issue a policy statement against the Santa Cruz Sleeping Ban and other anti-homeless laws. It was the largest such homeless crowd ever to hit an ACLU Board meeting in my experience. In the hour and a half before the meeting more than twice that number signed petitions demanding action. Folks got there under their own steam without prior organizing after an announcement and flyering at the Red Church a scant hour earlier. Perhaps because it’s end of the month or perhaps because some of had enough, we may be seeing a significant rise in activism. 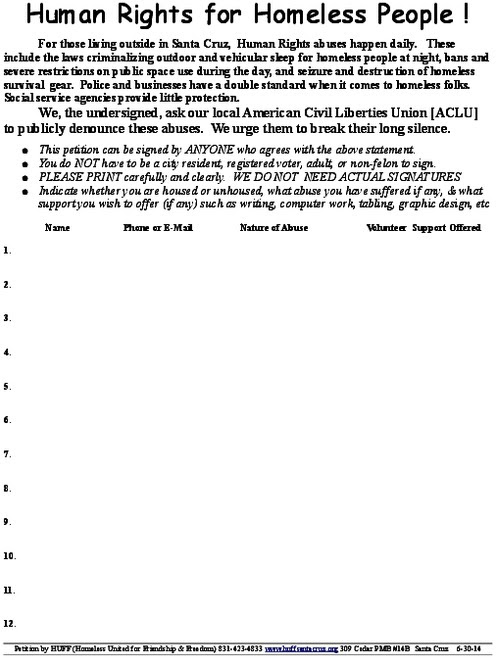 appeal_to_the_aclu_petition.pdf
download PDF (87.2 KB)
BOARD MAJORITY FINALLY BEATS BACK OLD GUARD
The ultimate 5-3 vote supported Steve Pleich’s resolution to suspend camping laws in the city and county came after several decades of ACLU indifference or hostility to this most basic of human rights. It was a marked change in policy for the Board, long dominated by the notorious Sleeping Ban Supporter former Mayor Mike Rotkin. Even if the change is only symbolic and unsupported by legal action or public lobbying. There is much toxic propaganda about “homeless crime” and the need to “curb our compassion” This breath of sanity is welcome and long overdue.

SLEEP IS NOT A CRIME RESOLUTION
The resolution reads:
“Statement of Principle: The Santa Cruz County Chapter of the American Civil Liberties Union supports in principle a limited time moratorium on enforcement of camping ban laws and ordinances within the City and County of Santa Cruz on the grounds that such laws and ordinances selectively criminalize the homeless community. While the chapter is mindful that such a moratorium raises practical problems within the community at large, we believe that the benefits of such an approach in terms of the opportunity for civic leaders, policy makers and stakeholders to reassess the efficacy of these laws and ordinances outweighs any temporary adverse impact.”

RECENT HISTORY OF ESCALATING HARASSMENT
Homeless folks have faced a steep escalation in destruction of their camps, seizure of the property, “move along” harassment as well as citations and arrests in the last few years as the economy continues to tank. New programs designed to paint lipstick on the endless goal of “cheaply” eliminating homeless people from the downtown and city generally by eliminating their civil rights.

These include the “100 Chronic Offenders” program, the Downtown Acountability Program, the “Real Change” Red Starve-Out-the-Panhandler meters, the outrageous constriction of public spaces for performers and the public on the sidewalks of all business districts, the prosecution of those unable or unwilling to deal with to their “no sleep” and “no sitting” tickets with misdemeanor charges, and the escalating Drug War under Take-Back-Santa-Cruz orchestrated Needle Hysteria.

Well-intended incremental legal efforts by Brent Adams’ Sanctuary Village group have been repeatedly rebuffed by city bureaucrats. Thuggish First Alarm Security guards have been promoted to positions as CSO’s on the SDPD (“Big John” being the example I’ve noticed). The “Happy Hosts” continue to retain an unmarked inaccessible office in the downtown area (if you can find it and determine when it’s actually open, please let us know!). Illegal commercial signs retain immunity from legal scrutiny but homeless backpacks and survival gear are fair game for seizure and harassment.

PRIOR ACLU SILENCE
The local ACLU has said nothing about any of these issues in spite of being repeatedly approached on them. [See “Expose the Local ACLU: No Help for Homeless Rights ” at http://www.indybay.org/newsitems/2013/12/01/18747111.php

Steve Pleich, who founded the “Homeless Legal Assistance Project” and is running for City Council for the 3rd time has been on the ACLU board for 3 years, and Vice-Chair for 2. Until last night he has not demanded any resolutions on these issues come up for a vote, in spite of having a host of allies appointed to the Board.

NUMBERS AND VOLUME MATTER
It is far too early to see if this is any kind of a turning point in either Pleich’s politick approach or ACLU timidity, but it seems clear that as Pleich himself agrees, having a significant number of people demanding change makes a difference.

In the presence of such numbers, previously timid and/or silent members of the Board may have gathered courage. The verbal commentary given by the angry and eloquent speakers will be on Free Radio Santa Cruz (101.3 FM, streams at http://audio.str3am.com:5110/listen.pls, archives at http://www.radiolibre.org/brb/brb140703.mp3 .

At one point Chair Geldblum seemed to have ordered the issue closed without a vote and demanded that the public leave. Though there was no objection by Pleich and the rest of the Board to this behind-closed-doors process, the word was passed down later that a vote was held and the resolution passed. .I’ve asked for more specific details from those permitted to remain and when more info, I’ll pass it on. ,

come_to_the_aclu_meeting.pdf
download PDF (69.5 KB)
Petition and Flyer Which Prompted the Largest Homeless Presence at the ACLU Meeting in Years