For the last month, HUFF has held regular protests outside the Santa Cruz Coffee Roasting Company initially focusing on “Backpack Bigotry”–the policy of that cafe, Peet’s, Lulu Carpenters, and Starbucks to “ban all backpacks”, but actually selectively admit the “less homeless-looking” folks. The protests are now encouraging musicians, artists, chessplayers, chatters, and the community generally to return and treat the sidewalks as the community property that it is. Laws criminalizing sitting or performing with a donation cup on 95% of the sidewalk need to be laughed off the Avenue. So far there has been general approval and no response from the armed uniforms patrolling the street. The article below includes a description, a flyer, and a petition. 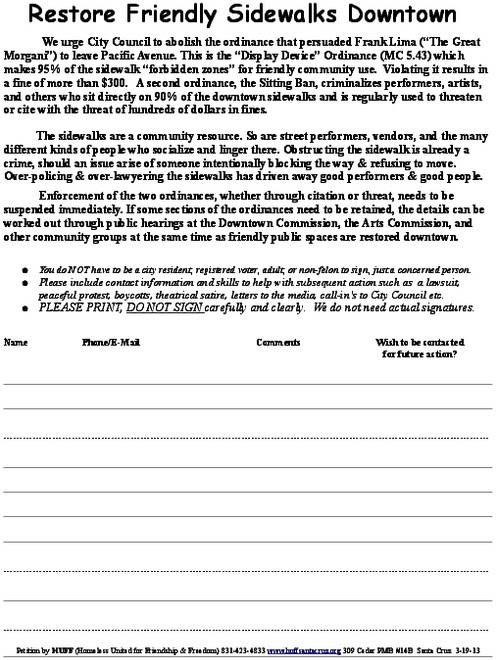 petition_to_restore_friendly_sidewalks_revised.pdf
download PDF (88.6 KB)
We gathered signatures today on this petition, expanding the Backpack Bigotry protest to include the larger issues.

Other activists reclaimed the sidewalk with display devices closer than 12′ to each other.

Passersby flagrantly ignored the laws against sitting on the concrete berms around trees. Signs were blatantly leaned against questionable obects. The one-hour
“Move-Along” rule was pointedly ignored.

No one complained. Hosts and police avoided the protest. Chip, the former artist now stooging for the Downtown Association, walked back and forth but declined to sign the petition. One traveler remarked Santa Cruz was the only city he’d seen in his journey that had so ridiculous a set of laws.

CSO Barnett was observed bushwacking bicyclists riding “the wrong way” on Pacific Avenue. He reportedly drove one young skateboarder to tears with a citation.

About a dozen folks signed the petition, others asked for information.

“Sir William” Blake asked for solutions and dialogue on downtown issues. Given the warmth of the day, we offered salt water taffy treats rather than cups of coffee to celebrants and observers.

One homeless-o-phobic woman, perhaps lured by a sign that mocked the “Drive ’em out of Town” mentality of the City Council and SCPD, retreated in shock and anger on learning the true purpose of the protest.

I’ll be playing some audio of the protest on my radio show tomorrow night (6-8 PM) at 101.3 FM (or go to http://www.freakradio.org and click on the red dot at the top of the transmitter icon). It will be subsequently archived on the HUFF website (http://www.huffsantacruz.org).

Thanks to all for coming. See you next week or whenever you decide to take back the sidewalk! 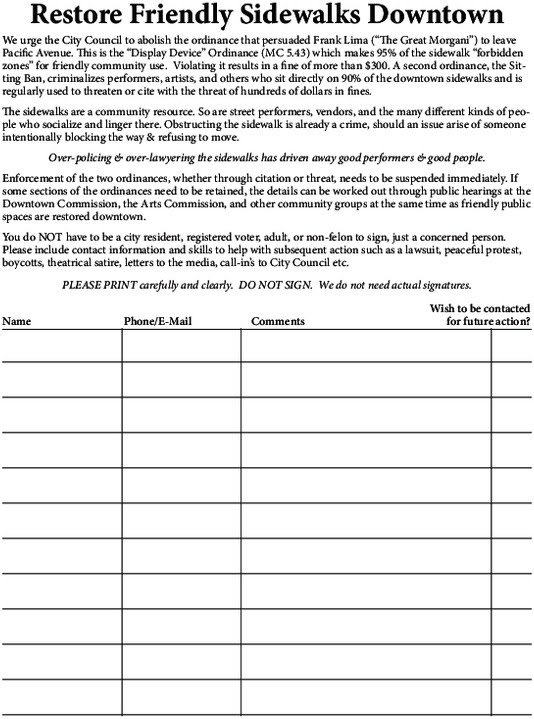 petition_by_pat.pdf
download PDF (73.8 KB)
Pat was kind enough to put together a more professional petition on the issues. Download and distribute!
Add a Comment
§Flyer
by Robert Norse 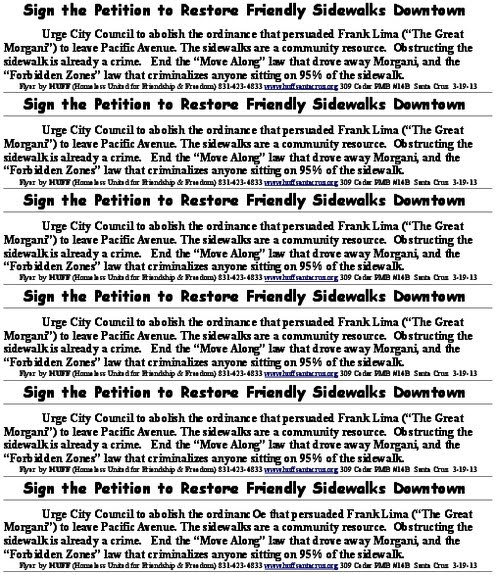