NOTES BY NORSE:  Santa Cruz City Council, staff, and PD aren’t the only anti-homeless authorities intent on running  homeless and street artists out of the community.  Albany, next to Berkeley, is another case in point.   As with the struggle to maintain the right to use the public space downtown, the Albany struggle has been a long one.  In 1994 mutual cooperation between activists in Berkeley and Santa Cruz successfully fought the harshest provisions of the Downtown Ordinances in both towns (though in Santa Cruz, the “thou shalt not sit on the sidewalk” merchants were  able to pass the first Sitting Ban later, making 6′ from a building a forbidden zone.  That was later extended to 14′ –and not just from a building, essentially eliminating all but a few places to sit down, display art, vend crafts, politically table, peacefully beg, or perform for donation.  Recently (see https://www.indybay.org/uploads/2013/10/08/updated_flyer.pdf) this was extended to more than 95% of the downtown Santa Cruz sidewalk and essentially all of the sidewalks in other business districts that abut buildings.
Albany Bulb Solidarity Campout, 10/2/13
by Dave Id   Monday Oct 7th, 2013 1:10 PM

Over sixty long-time residents of the former landfill known as the Albany Bulb are facing eviction as early as this month. For decades, however, the Bulb has been a safe place for those in the East Bay without traditional housing to make a home, in tents and even more permanent structures of their own making. Not only have hundreds of homeless persons found their own way to the Bulb over the years, but the origins of people making a home at the Bulb trace back historically, in part, to various East Bay police departments clearing city streets and dropping off homeless persons at the entrance to the Albany Bulb.

The land also serves as a free-flowing, open-air art museum featuring the works of numerous artists such as Osha Newman. The Bulb as a safe haven for East Bay citizens with no where else to go has long co-existed with recreational users, people of all stripes sharing the bulb. Nevertheless, the Sierra Club and Citizens for an East Shore State Park have pressured the Albany City Council to take action to remove those who live at the Bulb and declare the land “recreation only.”

This is despite the fact that the City of Albany provides absolutely no homeless services whatsoever and neither of pressure groups have shown any interest in offering assistance with securing alternate housing. After having lived quietly at the Bulb for years, residents are now organizing and taking action to raise awareness of their plight and fight impending eviction. On October 2nd, a solidarity campout was held at the Albany Bulb to support residents and strategize together for future actions in defense of the land as one of, if not the only, free and open spaces remaining in the Bay Area. 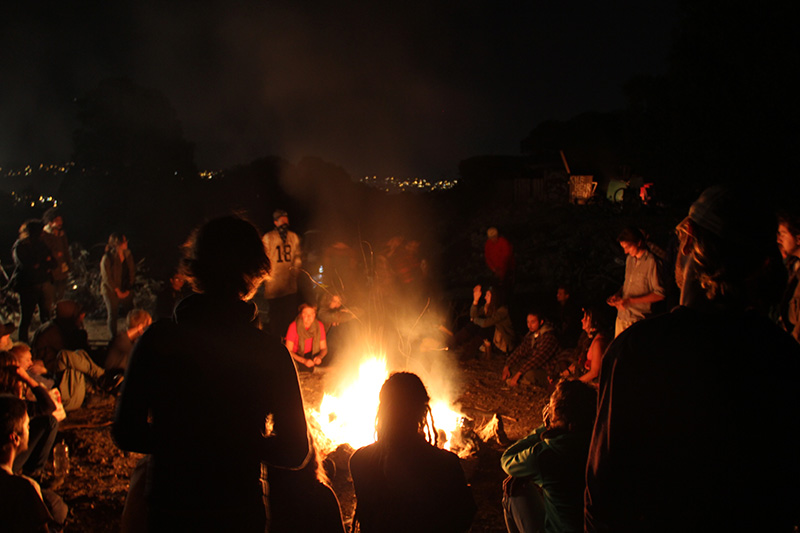 albanybulbsolidaritycampo…
[Solidarity activists and residents gather around a campfire in the amphitheater to discuss the history of people living at the Bulb and possible courses of action including speaking out at Albany City Council meetings.]”About the Albany Bulb,” from the Share the Bulb website:

The Albany landfill is an undeveloped spit of land, densely carpeted with vegetation, that pokes a little over a mile into San Francisco Bay from its east shore. Shaped like a tree that has fallen in the water, it begins as a broad elevated plateau, thins to a narrow neck, then widens out at the end to form what is known as “The Bulb.” Looking out from the Bulb on a clear day the eye can sweep in a wide arc from the Bay Bridge and the skyline of San Francisco in the south, to Alcatraz, the Golden Gate Bridge and the headlands of Marin. Overhead a huge sky. Far behind the freeway clogged with cars, and the cities of Albany, Richmond, and Berkeley.

The landfill opened for business in 1963 when the City of Albany signed a contract with the Sante Fe Railroad Company “for the purpose of creating usable land.” Prior to 1975, the operators of the landfill accepted garbage and refuse. But the landfill was intended for “demolition debris” and over time the garbage was buried under tons of concrete rubble, rebar, wire mesh, corrugated tin, steel, iron, coke, slag, asphalt, glass, plastic and excavated dirt. The first years of dumping created the plateau. When the mesa of rubble reached its peak the trucks began dumping their loads further out into the Bay. The finger of fill narrowed to create the neck, then widened at its tip and kept widening until December 1983 when the landfill was closed. In 20 years over 60 acres of new land had been created by the dumping of approximately 2 million cubic yards of waste to an average depth of 40 feet.

There is nothing “natural” about the origin of the landfill. It was not shaped by glaciers, the movement of tectonic plates or the persistent pummeling of wind and water. Nature had little to do with its creation, but when the dumping stopped nature saw its chance.

Over the past three decades, Nature and a particularly resourceful group of homeless people have reclaimed the Bulb as a wild space and a community space. The combination of reclaimed nature, community, and outsider art have made this former dump one of the most beautiful peninsulas into the San Francisco Bay, and has attracted daily dog-walkers, day-strollers, curious wanderers, picnickers, and others to an amazing place that reminds us of the many ways humans need the wild.

On Monday, October 7th, residents of the Albany Bulb and local community members will rally outside Albany City Council’s bi-monthly meeting and speak during the public comment section in defense of the Bulb, a unique space for arts, community, and haven for those who have nowhere else to go. The gathering will then leave the meeting and march down Solano Ave to set up a one night encampment, demonstrating what the thoroughfare will look like if the Bulb’s 60+ residents are evicted from their homes.

ALBANY, CA — On Monday, October 7th, residents of the Albany Bulb and local community members will rally outside Albany City Council’s bi-monthly meeting and speak during the public comment section in defense of the Bulb, a unique space for arts, community, and haven for those who have nowhere else to go. The gathering will then leave the meeting and march down Solano Ave to set up a one night encampment, demonstrating what the thoroughfare will look like if the Bulb’s 60+ residents are evicted from their homes.

The City of Albany, along with the Sierra Club and Citizens for East Shore Parks, is trying to evict more than 60 people who call the Albany Bulb home in order to go through with plans to develop a park, without providing any alternative housing solutions in the face of the coming winter. Those fighting to prevent the eviction cite the City of Albany’s insufficient shelter resources, as well as the dangerous environments in homeless shelters and on the streets, as reasons to preserve the Bulb as a haven.

The Albany Bulb has been home to hundreds of otherwise homeless individuals over several decades, and currently houses about 60. The land was originally a solid waste landfill, but the hard work and artistic contributions of the Bulb residents and allied community members has turned the place into one of the most physically and psychologically safe places to be homeless in the Bay Area, as well as a much-loved hub for art and alternative culture. Many Albany residents have fond attachments to the art and the people at the Bulb.

This action comes in the wake of a series of actions urging the city not to go through with their eviction plans, including a solidarity concert and potluck last Saturday, an encampment at the Bulb on Wednesday, and several independently organized actions targeting the Sierra Club and Albany City Council members.