NOTES BY NORSE;  The Right2Rest Law has been laid to rest (for this year at least).   Perhaps pressing for action in a particular city would be a good focus for unhoused activists all over the state, instead encouraging the massed wealthy power all the bigoted city governments to shower legislators with lobbyists.

Contact Councilmember Micah (poo on “poopoo”) Posner, the man whose credo has been “one portapotty-but-let’s-not-disturb-the-staff-by-pressing-to-get-the-already-existing-bathrooms-open-at-night”.  He has scheduled an 11 AM meeting on Friday if anyone wants to come.  But you have to call him at 420-5028 beforehand to schedule it.

Meanwhile in Santa Cruz, crackdowns continue–individually and institutionally.  The Red Church (Calvary Episcopal) has not only withdrawn its lawns from 2-hours-a-week sanctuary to 0-hours-a-week as Pastor Joel Miller, reportedly under pressure from “there goes the neighborhood!” neighbors as well as ecclesiastical superior, called in the police night before last to remove “criminal sleepers” on the property.  Cops and security thugs steadily ignore the right to use public sidewalks around Cafe Pergolesi by giving “obstructing the sidewalk” tickets to at least two people who asked why they didn’t have the right to stand non-obstructively on the sidewalk.   Standing while homeless is apparently the crime involved.  Or questioning the inflated authority of guys in uniforms with badges and guns, perhaps.

Has the Homeless (Lack of) Services Center [HLOSC] okayed the collusion between Harvey West Businesses, the SCPD, and the Public Works Department to create the first-in-Santa-Cruz “no parking at any time without a permit” zone up and down Coral, Fern, and Limekiln streets?   Call them up at 420-5020 and ask them.  I can’t get through.   Or perhaps shoot an e-mail to longtime HLOSC-backer (and Mayor) Don Lane at dlane@cityofsantacruz.com  or 831-420-5022.

Right To Rest Legislation Held Over in State Senate

Proponents of the Right to Rest bill — including a busload of advocates of homeless people from San Francisco and Oakland — turned out in great numbers. Supporters outnumbered opposition lobbyists from business alliances and city governments by 6 to 1 during legislative hearings in Sacramento.

The Right to Rest Act, California Senate Bill 608, which would decriminalize sleep, rest, the sharing of food and prayer, was pulled from committee without a vote. But the struggle for the bill in California will continue next year.

For now, SB 608 has been delayed after State Sen. Carol Liu (D-La Cañada-Flintridge) asked the Transportation and Housing Committee to hold off a vote on April 7 when it appeared there weren’t enough votes to advance the legislation.
“Today wasn’t a defeat,” said Paul Boden, director of the Western Regional Advocacy Project, one of the homeless advocacy organizations sponsoring the bill. “It was step one in a long process.”

SB 608, known as the Right to Rest Act, will still be active next year, he said. The state legislature still has up to two years to act on proposed legislation.

If passed by both the Senate and Assembly, the bill would ensure all Californians — regardless of housing status — the rights to rest, move freely in public, share food, pray, and sleep in a legally parked vehicle.

In effect, it would make local sit-lie and anti-panhandling ordinances that cities use against their homeless residents unenforceable throughout the state.

At the hearing, proponents of the bill — including a busload of advocates of homeless people from San Francisco and Oakland — turned out in great numbers. Supporters outnumbered opposition lobbyists from business alliances and city governments 6 to 1 during public comment.

Their refrain throughout the session was “stop criminalizing homelessness.” Several wore T-shirts with the words “Homeless Bill of Rights” and an image of a dove and a pair of hands breaking chains. This popular design comes from an image drawn by Ronnie Goodman, a homeless artist who has regularly lent his work to homeless people’s struggles.
Angel McClain, whom Liu invited before the panel, spoke in defense of SB 608. Now a senior advocate at St. Mary’s Center in Oakland, she spent 15 years on the streets, staying in tents, abandoned houses and by freeways — essentially, any place where she could find refuge.

She said that police officers targeted her for arrest simply because of her homeless status. “I was arrested for little or no reason because I was known as a homeless person,” she told the panel. “My cousin told me the police had a schedule to pick me up and put me back in jail.”

McClain also suffered dehumanizing treatment from the police. “I was treated like dirt, no consideration, like a piece of garbage that you discard,” she said.

Opposition to the Right to Rest bill came mainly from the League of California Cities, which argued that the bill would exempt homeless people from so-called “quality of life” laws that in theory apply to all people, but in fact are used almost exclusively against homeless people. The statewide association wrote a letter to Liu that the bill wouldn’t create or expand housing and social services.

But Boden said that is not the focus of the bill. It’s meant to remove legal barriers homeless people face because they have been arrested for the necessary acts of resting, sitting or lying in public.

“It’s not about ending homelessness, just decriminalizing it,” he said. “Everyone sleeps, eats and sits, but only some get tickets or go to jail for it. Criminalization only makes things worse for people living on the streets. And by not having to enforce crimes of status, law enforcement can focus on real public safety issues.”

However, senators on the committee and opponents of the bill said SB 608 would remove a tool from police in enforcing local ordinances (see sidebar).

Appearing before the panel, Matt Gray, a lobbyist for Taxpayers for Improving Public Safety and the California Small Business Association, painted a worst-case scenario of what would happen to communities if the bill passes.

“The answer is simply not to allow the rest of California to be like San Francisco,” he said.

Recently, the city of San Francisco was also used as a model of homeless criminalization in a report from the University of California at Berkeley law school. Of the 58 cities with anti-homeless ordinances it studied, San Francisco tied Los Angeles to lead all others in their overwhelming number of anti-homeless laws — 23 in San Francisco. Homeless people were given about 23,000 citations in a seven-year span for such nonviolent, poverty-related offenses as sitting, resting, camping and panhandling.

In the last five years, San Francisco further restricted homeless people’s activities with prohibitions on sitting and lying on sidewalks at certain times, staying in public parks overnight, and parking large vehicles on most city streets overnight.
Berkeley — which has 10 anti-homeless ordinances of its own — is considering adding many more, including setting one’s belonging by a tree, lying on planter walls, and panhandling within 10 feet of parking pay station. 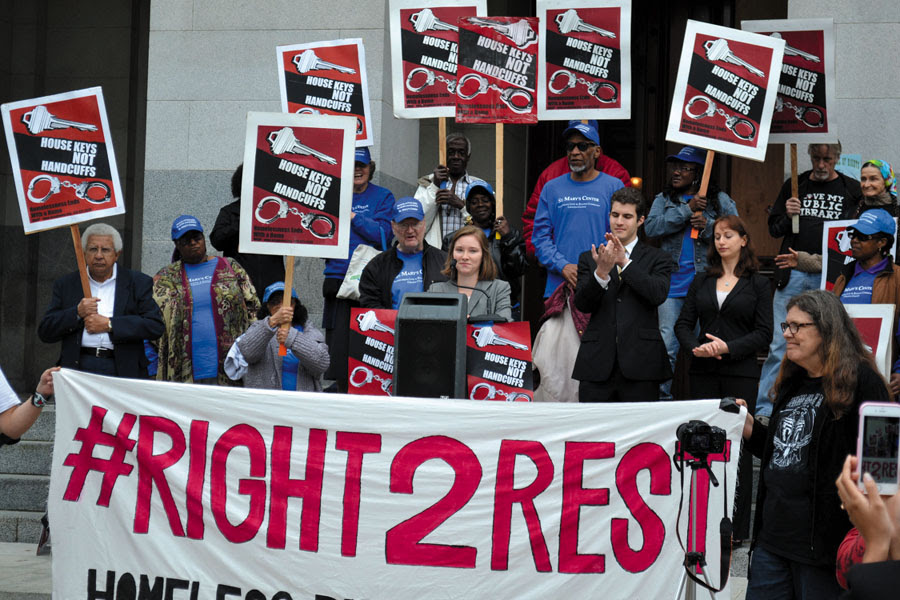 Homeless advocates demonstrate in Sacramento for the Right to Rest Bill which would end the enforcement of many anti-homeless laws. Janny Castillo photo

Osha Neumann, an attorney with the East Bay Community Law Center, said the proposal would make Berkeley’s tree-lined and metered streets off limits to homeless people if it is enacted.

“Taken together with existing laws, these ordinances would essentially make it illegal for people who are homeless to have a presence on our streets and sidewalks,” he said.

Right to Rest bills are moving through legislatures in Oregon and Colorado.

Two years ago, a more expansive version of the legislation called the Homeless Bill of Rights passed the Assembly Judiciary Committee, but died when the Appropriations Committee declined to bring it up for a vote.

You Can’t Make This Stuff Up

If there was any doubt that SB 608, the Right to Rest Act, would face any roadblocks in the legislative process, they were surely dispelled when State Sen. Cathleen Galgiani (D-Stockton) weighed in. Before Galgiani’s remarks, a few of the California state senators on the Transportation and Housing committee had already voiced reservations that would lead to a prospective “No” if SB 608 author Carol Liu asked for a vote on the bill on April 7.

Some were concerned about provisions in the bill such as a $1,000 fine to communities upon violation of the act. Others wanted clarifications on how the bill would affect those sleeping on public versus private property. (Liu said it would not apply to private property.)

But Galgiani’s rambling explanation of why she wouldn’t support the bill left some incredulous. While asserting that uneven application of anti-homeless ordinances aren’t a problem in her district, she said cops still need them for other reasons — such as thwarting gang warfare.

“You and I and law enforcement cannot tell who is homeless from someone who belongs to a gang,” she said. “If I dress down, I can blend in as well.”

She then recounted a recent incident that happened in her district.

“This last month,” she said, “we’ve had a drive-by shooting at a market just blocks away from where I used to live a few years ago, where three people were killed. Now it’s a known place where people loiter. How do you define ‘loiter?’ You can’t define it just by looking at someone or seeing that someone is spending time at a place for too long. That’s why we must rely on law enforcement for the judgments on behavior taking place. Law enforcement needs that tool to address the behavior.”

What Galgiani failed to mention is that the U.S. Supreme Court found anti-loitering laws to be unconstitutional in 1999 primarily because of their vagueness.

Galgiani also related another recent tale of an altercation among three motorcycle gangs near a strip club where gunfire was exchanged.

“These are the problems in my district,” she said. “Law enforcement in my district, they’re not bothering people who are homeless. I respect that is occurring throughout the state.” She added that the state should “do a broad blanket for everyone to abide by” if SB 608 becomes law.

Another addition for the file under “you can’t make this up” came from Matt Gray, who lobbied against the bill on behalf of two business organizations.

While he encouraged creating affordable housing and improving social and health services — at the same time, referring to homeless people as “transients, homeless or whatever you want to call them” — he ultimately said the overarching solution wasn’t “allowing the rest of California to be like San Francisco.” No city in California has more anti-homeless laws than San Francisco.

One thought on “Right2Rest Legislation Update and 2015 R.I.P.”