There have been nearly two years of weekly overnight protests on the sidewalks adjoining City Hall (the Freedom Sleepers) and a month of nightly protests (a group I call the Survival Sleepers) at the same spot. Now, the day after Fuhrer Trump has directly attacked Syria, escalating to the brink of nuclear war, SCPD attacked the poor sheltering themselves under the eaves of the City Hall and arrested Freedom Sleeper Abbi Samuels as she videoed the abuse. The Winter Shelter program (sheltering 110 of the 1000-2000 Santa Cruz homeless) ends today. 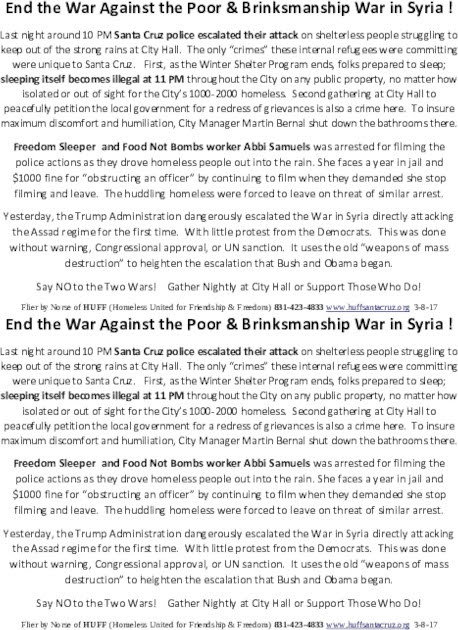 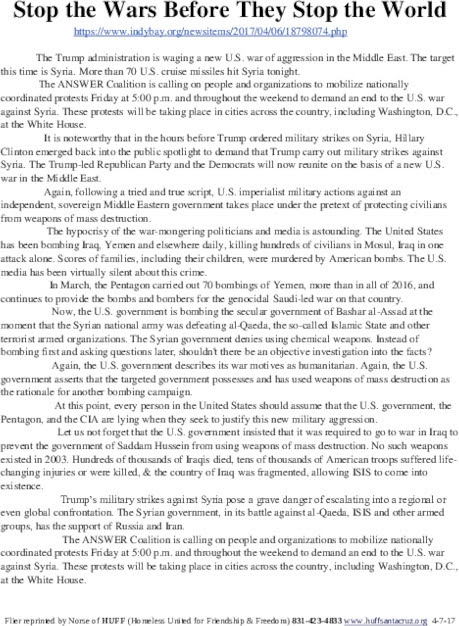 Free Radio Santa Cruz was briefly back on the air, but its transmitter died.  Until it’s repaired, we’re back on the stream at freakradio.org.

The show reviews homeless input from the last week outside City Hall and on Pacific Avenue including Jenny, Tyler, Enrique, Esteban, Shannon, Cat Man, Shadowside Steve, Julie, Renegade Robert B., and others

with the usual pungent groans from host Robert Norse.

HUFF voted today to support a number of resolutions.

HUFF Agenda Stuff:  Getting records on Post Office Hankey Pankey in the War Against the Food Not Bombs feedings; using Public Records to Make City Council come clean; Anti-War Horizons: Reviving the Vigil Against Two Wars; Valet Homeless Storage Services on Pacific–a Frolic into the Future; Searching for the Missing Pendulum Downtown; Facing the Flood of Folks Emerging from the Winter Shelter Program In a City With a Sleeping Ban; Those Rumors About New Laws against Sleeping on the City Hall Sidewalk–Creative Fiction or Disturbed Delusion?…and whatever else goes down with the Free Coffee.

Tune in and listen for the details, or catch the archive at http://radiolibre.org/brb/brb170402.mp3