NOTE BY NORSE:  The hunger strike by prisoners state-wide has reportedly been joined by our local jail internees.  We don’t have stats on how many in jail are being held under anti-homeless laws (or failure to appear for END_OF_DOCUMENT_TOKEN_TO_BE_REPLACED
NOTES BY NORSE:  Take Back Santa Cruz is a small but influential group of bigots who have acquired a substantial following by blaming homeless people for improper needle disposal, “illegal” camping, and the presence END_OF_DOCUMENT_TOKEN_TO_BE_REPLACED
For those who want to enter the labyrinthine world of police records, get the officer’s name and badge number, the date, time, and place of the incident, and send an e-mail requesting a Public Record to dlentini@cityofsantacruz.com .    She’s been helpful to me recently but my past experience with earlier Public Records requests have been neither speedy nor satisfying.  However, the SCPD’s attempt to stall, block, or edit a response can also be illuminating.    Details of the display are in the indybay article below.  The names and badge numbers of all SCPD cops can be found at https://www.indybay.org/newsitems/2013/07/22/18740217.php.

Codes
by SCPD (posted by Norse) 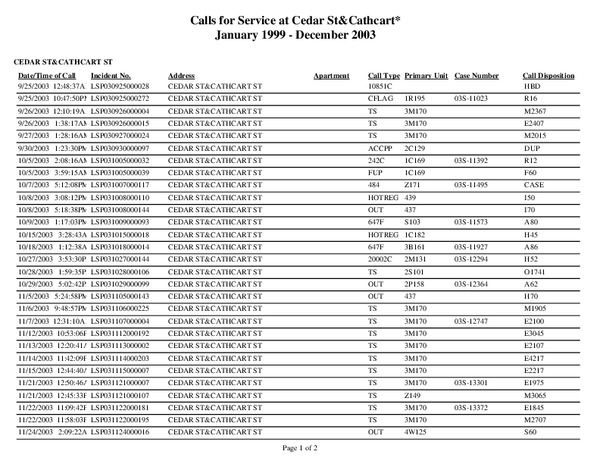 calls_for_service_at_cathcart_and_cedar_in_2003.pdf
download PDF (1.2MB)
Another Public Records Act request was speedily answered by Debbie Lenori. She provided a list of some of the codes used by the SCPD in referring to the specifics around “calls for service”. The codes were mentioned in an earlier Public Records Act request seeking info on how much police involvement there was with the 24-hour portapotty (which was supposed to precede a restroom) at Cathcart and Cedar Streets from 1999 to 2003.

I’ll likely be writing another story on Portapotty Politics–since I got a limited response. It’s useful to know the details here–considering the current staff action reportedly planning a portapotty on Front St. near the Community Credit Union in the City’s Parking Lot (see http://www.santacruzsentinel.com/ci_23718760/editorial-toilet-trouble-city-doing-its-best-deal ). I consider this an expensive set-up which is best dumped in the crapper in favor of open bathrooms at night in San Lorenzo Park and downtown.

The codes I was given:

These codes refer the attached summary of calls for service at Cathcart and Cedar, some of which may refer to complaints about the portapotty there.

For those pondering the attachment, I’m also advised by a local source that only those entries that actually involve a Case Number, as distinguished from an Incident Number are actually on their way to generating a Police Report. There may however be citations without a police report, simply involving officer’s notes. Or such is my experience in traffic court.

NOTES BY NORSE:   The excuses used by authorities to disperse a lawful assembly protesting housing and homeless policies in downtown Portland are similar to those used to disband panhandlers and political signers on medians in Santa Cruz in the recently passed “no lingering on the median” ordinance.  In Santa Cruz, the undocumented and transparently false claim of “public safety” has become the new mantra to drive the homeless out of sight and town in  Santa Cruz.  (See “Round Two–The New Anti-Homeless Laws Return for a Final Reading” at https://www.indybay.org/newsitems/2013/06/10/18738230.php )

It remains to be seen if activists of all political stripes will roll over for this new contracting of public space at traditional protests at the Town  Clock and elsewhere.  I saw only one person took the  median (other than mobile photographers documenting the march) at the NAACP march denouncing the Zimmerman verdict in the Trayvon Martin case in Santa Cruz on July 21st.

For the perspective of the Occupy Portland and homeless encampment activists swept from the protest, go to  http://www.individualsforjustice.com/ .  The stories below are from Willamette Week, a more mainstream media source.
The comments that follow the stories are often moving and educational.  Check them out by clicking on the web addresses that follows the stories.

Portland Police officers quietly posted metal signs in front of City Hall Friday evening outlawing obstruction of the sidewalk along Southwest 4th Avenue—in effect serving an eviction notice to the homeless encampment that has swelled to more than 40 people in recent weeks.

Hales spokesman Dana Haynes confirmed to WW tonight that the mayor ordered the signs installed, and has told police to sweep out sleeping bags and other property early next week.

“There are people who won’t use the front entrance because they’ve been harassed by the campers,” Haynes says. “We finally thought, ‘That’s it. No more.'”

Haynes says Portland Police have logged 113 calls in the first 180 days of this year to the sidewalk in front of City Hall. And in recent weeks, the camp has grown with the arrival of “summer travelers”—street kids who pass through Portland each year.

The media drumbeat for Hales to crack down has grown, too, with local TV stations and Oregonian columnist Steve Duin featuring the camp, which calls itself a protest against city housing policies.

Hales signaled early in his administration that he would make ending an “epidemic of panhandling” a top priority—but lost a weapon in that fight when the Oregon Legislature spiked a bill that would have allowed Portland to revive the controversial sit-lie law.

Tonight’s sign installation means Hales is using the rule he has at his disposal: a segment of city code called a “high-use pedestrian zone.” The signs along Southwest 4th Avenue say the portion of sidewalk is for pedestrian use only.

Haynes says that zone, which is in use in several other downtown locations, will extend to the Portland Building next door, where most city bureaucrats work.

By 8:45 pm Friday night, homeless campers had already defaced one of the signs with graffiti and a Cascadian flag sticker. The crowd outside City Hall had expanded into Chapman and Lownsdale squares—home to 2011’s Occupy Portland protests—and included a shirtless toddler, several dogs and a white rat.

One protester, who calls himself Graham (“like the cracker”), told WW he saw police install signs shortly after the end of business Friday. He says he’s not leaving.

“We’re going to stay here, whether there’s signs or not,” Graham says. “It is a protest, for crying out loud. By the time the police get here, we’ll be ready.”

FOR COMMENTS GO TO:

An Occupier outside City Hall on Thursday, Nov. 10, 2011 – Photo by Aaron Mesh
Mayor Charlie Hales‘ decision to evict a growing homeless camp from the Southwest 4th Avenue sidewalk is only the first stage of a plan to transform the plaza in front of City Hall.

The next step: food carts.

WW recently learned Hales met with staffers in the city’s facilities department in recent weeks to discuss adding food carts, coffee carts and tables to the City Hall plaza and lobby—essentially turning the 118-year-old building into a cart pod.

Hales confirmed these discussions to WW this afternoon.

“City Hall and the Portland Building should be the people’s buildings,” Hales says. “It should make sense for people downtown to drop by City Hall to grab a cup of coffee or a snack or lunch; to meet friends here; to consider this as their building. That’s our goal.”

Hales spokesman Dana Haynes says the mayor’s plan is still in talks, and the city hasn’t created a timeline for adding carts.

“His vision for City Hall includes food carts and coffee carts, inside the building and outside on the plaza, as well as more tables and chairs inside, and tables and chairs outside,” Haynes says. “He doesn’t have a timeline for this. But he has met with facilities and with other elected officials to outline the idea.”
The Oregonian mentioned the food-cart idea as a rumor last month. But today is the first time city officials confirmed the plan is underway.

Hales confirmed in a press conference today that city officials would power wash the sidewalk this week, removing the homeless encampment that has swelled to more than 45 people. Reports have questioned whether city code gives the mayor legal authority to ban sleeping on a stretch of sidewalk 24 hours a day. Hales hasn’t had an answer.
(UPDATE, 3:37 pm: It doesn’t.)

Campers on the sidewalk, who say they are protesting housing policies among other issues, say they won’t leave without a fight.

Hales says the eviction is necessary because campers have been harassing visitors and television crews reporting from City Hall.

But they’re also bothering City Council. Sources tell WW all but one of the city’s elected officials have stopped using City Hall’s front entrance on Southwest 4th Avenue in recent weeks to avoid being heckled.

Hales says he wants City Hall and the next-door Portland Building to be inviting to the public—which is why he removed electronic security gates this summer. The Oregonian reported this morning Hales also considered adding bioswales to the sidewalk but dropped the idea after city commissioners objected.

“They should be natural gathering spots,” Hales tells WW. “But that hasn’t been the case lately.”

Multnomah County jail inmates removed property from a homeless camp outside City Hall this morning, as Mayor Charlie Hales delivered on his promise to clear the Southwest 4th Avenue sidewalk.

The jail may soon have new residents. City Hall officials tell WW that campers who want to be arrested in protest will be later this morning.

By 7 am, most of the 45 campers in front of City Hall had moved across the street and camped on the sidewalks around Terry Schrunk Plaza.

As WW reported, Mayor Charlie Hales is clearing out the growing camp of protesters and homeless people from the plaza in front of City Hall—his plan is to install food carts there instead. The area, he says, is a high pedestrian use zone and must be kept clear.

About two dozen Central Precinct officers made their way to the plaza and City Hall shortly after 8 am, and began asking people to move their belongings off the sidewalks on both sides of Southwest Fourth Avenue, and campers started screaming at cops about displacing the displaced.

“The sidewalk is sacred ground!” one man shouted. “You don’t mess with the sidewalk as far as protest goes!”

Next, a Multnomah County inmate work crew arrived around 8:30 am and cleared up cardboard and other items left by campers. Inmates have a contract with the city to do such clean up; city workers are set to perform the power washing Hales promised yesterday when he announced he was cleaning out the campers.

On the use of inmates, Hales spokesman Dana Haynes says “it’s one of those contractual things… it’s not the best visual.”

Jim Whittenberg, who is not homeless and lives in Northeast Portland, sat on the bench of his wheeled walker, saying that he plans on getting arrested in solidarity.

The mayor’s office is also removing a set of homemade shrines, including the thatch tent that calls on people entering City Hall to pray for the end of the city’s camping ban.

The city is crafting a code of conduct for the plaza as its justification for removing the vigils and has hung the new code in the windows at City Hall: