But to keep you busy reading, check out…

http://www.santacruzsentinel.com/social-affairs/20180127/santa-cruzs-benchlands-homeless-camp-the-good-the-bad-the-ugly?source=most_viewed if the Scent-Anal webmaster will let you go there.  For those with strong stomachs, there’s always the Bigots Banquet Comments section.

To study state-sponsored vigilante-ism in action, follow the fun frolics of the NST (Neighborhood Safety Team) at http://scsire.cityofsantacruz.com/sirepub_PSCom/mtgviewer.aspx?meetid=1045&doctype=AGENDA (see the attachments to item #2).

San Lorenzo Campground was given a “be gone with your tent by 5 PM Tuesday” for yet another “clean-up”.  I’ll be reporting on that with a few interviews Thursday evening on the ever-fascinating Bathrobespierre’s Broadsides show at 6 – 8 PM.

You can also contact HUFF central by phone for assignments, reports, and updates at 831-423-4833.   We need help reviewing the SCPD’s Citation record to see how accurate Chief Mills’ “No Sleeping Ban Citations at Night on Public Property” policy aligns with SCPD practice over the last 2-3 months.

For outside updates, check out Facebook pages for Santa Cruz Food Not Bombs and Homeless Outside in Santa Cruz.  Don’t forget to check in on archived audio of Bathrobespierre’s Broadsides if didn’t catch the Sunday morning or Thursday evening broadcasts.   Go to huffsantacruz.org and click on “Lost Shows”.    Interesting stuff.

This show archives tomorrow at http://www.huffsantacruz.org/Lostshows.html

Contact 575-770-3377 to volunteer different kinds of support for the the San Lorenzo Park Campground.   Join Santa Cruz Food Not Bombs locally through Facebook.
Still a $500 reward for any info leading to Free Radio’s finding a 10′ X 10′  studio space for Free Radio Santa Cruz to rent in Santa Cruz.

HUFF (Homeless United for Friendship & Freedom) meets Wednesday 1-24-18 11 AM at the Sub Rosa Cafe (next to the Bike Church at 703 Pacific).  Coffee on the house.

All about Berkeley, Berkeley encampments, and the First They Came for the Homeless struggle to establish a model campground that homeless folks can self manage as an alternative to the costly, token, and repressive shelter frauds that pose as “pathways to housing” but are actually dumptrucks to the streets.

Free Radio, as usual, streams at freakradio.org.  The show archives under Lost Shows on the HUFF website at http://www.huffsantacruz.org/Lostshows.html.   Look for the Latest Show – 1/25/2018  Thursday, January 25, 2018 – Bathrobespierre’s Broadsides.

After a puffy fluffy City Council meeting today, but with passage of certain place-holder measures that don’t actually disperse the San Lorenzo campground in the immediate future and promise “rent control discussion” at the next February meeting, HUFF continues on its weary way with its second January meeting at the Sub-Rosa at 11 AM Wednesday January 24th.

Positive news: tenant advocates have turned in the wording for a Rent Control Initiative to be examined by the City Attorney; First They Came for the Homeless–a tough and tenacious homeless-run encampment in Berkeley has won a hearing in their lawsuit against the City of Berkeley for violating their First Amendment rights in 16 separate police raids; Sleeping Citations in October and November from Parks and Recreation are down–according to hardworking Citation Searchers Laura and Gloria.

On the Agenda:  City Council Report, Encampment Defense Discussion, Berkeley’s Feisty First They Came for the Homeless lawsuit advancement–its Santa Cruz implications, the Latest from the Lapis Road RV Struggle from Beggarbacker Becky (depending on weather conditions), and whatever comes out of the usual HUFF turmoil.

You can also contact HUFF central by phone for assignments, reports, and updates at 831-423-4833.   We need help reviewing the SCPD’s Citation record to see how accurate Chief Mills’ “No Sleeping Ban Citations at Night on Public Property” policy aligns with SCPD practice over the last 2-3 months.

For outside updates, check out Facebook pages for Santa Cruz Food Not Bombs and Santa Cruz Homeless Outside.  Don’t forget to check in on archived audio of Bathrobespierre’s Broadsides if didn’t catch the Sunday morning or Thursday evening broadcasts.   Go to huffsantacruz.org and click on “Lost Shows”.    Interesting stuff.

While Hart has reportedly been forthcoming in dealing with the marijuana growers lobby by slowing or stopping raids (or at least releasing public records), no one has yet done an analysis of class, race, and “drug crime” of the jail population.  Myself included.  I include more critical commentary below.

What prompted the recent rebellion?  From the mouths of those who rebelled, not those who struck them down, please!

Cold Temperatures Prompt Inmate Rebellion in Santa Cruz Jail
by Santa Cruz Police News
Thursday Jan 18th, 2018 11:44 PM
Inmates locked in the Santa Cruz jail armed themselves, and created booby traps and barricades in their cells, as they staged a masked rebellion this week over cold temperatures within the facility, according to authorities. 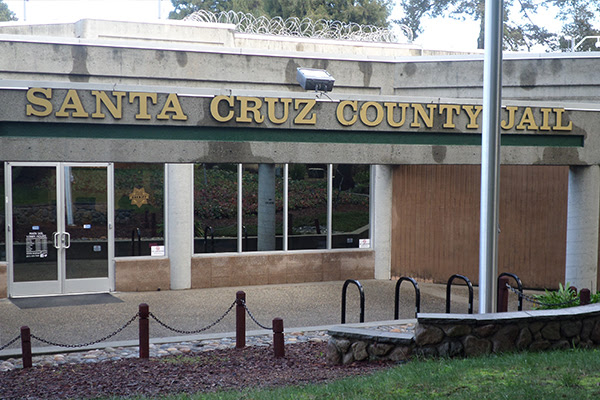 26 men in the west-wing L Unit of the jail complained about the cold temperatures, and on Tuesday afternoon they, “tied trip lines from ripped jail-cell sheets, covered their arms with socks, hid their faces with makeshift masks,” and, “armed themselves with soap, a radio, mop, books and bottles of liquid,” according to the Santa Cruz Sentinel. They also created “trip lines,” and “covered the unit floor with soap and water and blocked stairwells and walkways with mattresses as they tried to pelt the guards with books and soap,” according to a jail official..

The rebellion left over $1,000 in property damage in its wake.

“Over the last several days, male inmates residing in a housing unit at the Main Jail became increasingly concerned about the unit’s ambient air temperature. Maintenance has been actively working to increase the temperature above 70 degrees and Jail staff provided extra blankets in the interim. Over the last 24 hours, the inmates became increasingly non-compliant to the point that they refused Correctional staff directives, used mattresses as makeshift barricades and prepared tools for offensive and defensive use. Despite hours of Correctional staff attempting to resolve and deescalate the disturbance, the inmates ultimately refused to follow lawful directives. 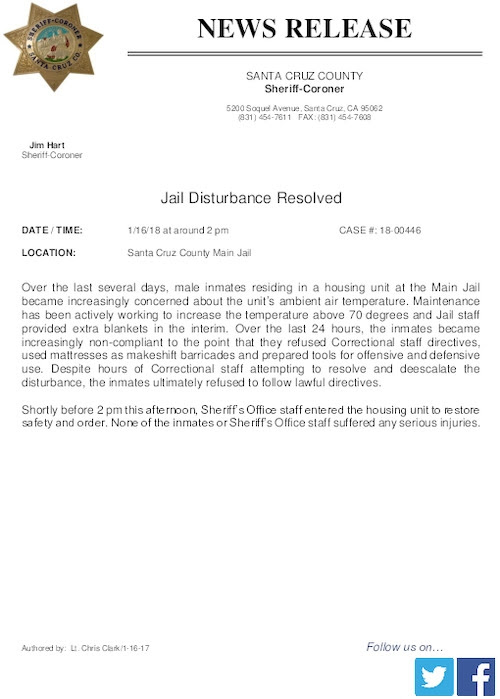 END_OF_DOCUMENT_TOKEN_TO_BE_REPLACED

This is an updated version of a flyer originally prepared last year in response to repression at the Bookshop Santa Cruz in its hypocritical reading of George Orwell’s 1984, while excluding disfavored activists from the store, even from access to its publicly funded bathroom. My broader focus was on the criminalization of the poor and specifically poor women..
The tumultous massive Women’s Day march seemed to have as many as last March’s huge march, though not having a helicopter it was hard to tell. Folks packed into Pacific Avenue and at points it became hard to squeeze through.

Many signs, many unfamiliar faces, hundreds of children, dogs, women and men. Organizations with huge banners and an ocean of anti-Trump signs and pussy hats.

As ever, I was concerned about this being another “kick out Trump and reinstall Trumpism under the Democrats” rally with little or no focus on local discrimination against women (specifically homeless women). I did see one “End the Sleeping Ban” sign.

Many (myself included) have delighted in the drop in citing people for sleeping at night on public property and the opening (for a few) of the San Lorenzo Park as campground, However the Sleeping Ban law is still on the books; City Council is still in the hands of a repressive Terrazas majority; and homeless women (and men) continue to face harassment and citation for just being in public spaces.

Neo-liberal hypocrites like the Coonerty clan (that own and manage the Bookshop Santa Cruz) continue to play politics with homeless lives, supporting anti-homeless laws like the Parking Lot Panic law (which bans being in a parking lot without parking a vehicle or walking directly through).

The question I’ve repeatedly asked is whether these large nationally organized parades actually lead to any real local action on human and civil rights issues. I didn’t see much come out of last year’s March Women’s March.

My interviews and commentary will be broadcast on Free Radio Santa Cruz and will be archived 1-22 at http://www.huffsantacruz.org/Lostshows.html .

http://huffsantacruz.org
§The flyer
by Robert Norse
Download and distribute–not just for the Women’s Day March. 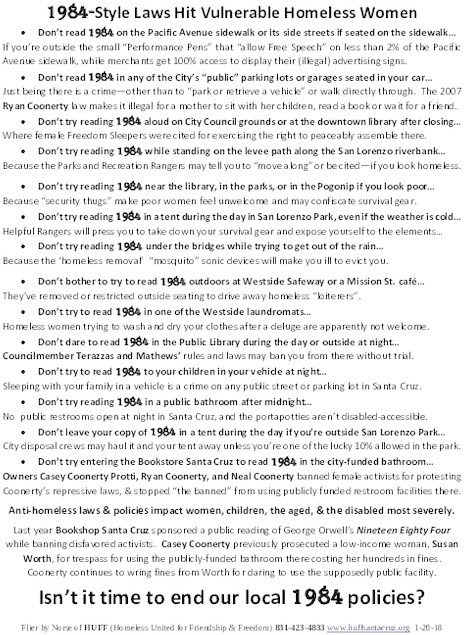 Katenjammer Keith and the Food Not Bombs  folks give updates;

This show archives tomorrow (1-22-18) at http://www.huffsantacruz.org/Lostshows.html

Contact 575-770-3377 to volunteer different kinds of support for the the San Lorenzo Park Campground.   Join Santa Cruz Food Not Bombs locally through Facebook.

Still a $500 reward for any info leading to Free Radio’s finding a 10′ X 10′  studio space for Free Radio Santa Cruz to rent in Santa Cruz.

HUFF (Homeless United for Friendship & Freedom) meets Wednesday 1-24-18 11 AM at the Sub Rosa Cafe (next to the Bike Church at 703 Pacific).  Coffee on the house.

Same day interview with Katzenjammer Keith McHenry, Food not Bombs co-founder and Santa Cruz activist; “12 Years Later” Interview with John Maurer, cited for a “Fuck the Pigs” sign in his hat while panhandling in front of the Palomar more than a decade ago, Bathrobespierre on the MLK Parade.
Bathrobespierre’s subsequent thoughts are also at “Flyer Distributed in the MLK Police-Led “Peace and Justice” March in Santa Cruz” at https://www.indybay.org/newsitems/2018/01/16/18805901.php .

Continuing our twice-monthly schedule, HUFF-hungry folks will have to wait another week.  You can also contact HUFF central by phone for assignments, reports, and updates at 831-423-4833.   We need help reviewing the last half-year’s harassment of homeless by Parks and Rec Rangers.

Volunteer if you fancy.

In the meantime check out “Flyer Distributed in the MLK Police-Led “Peace and Justice” March in Santa Cruz” at https://www.indybay.org/newsitems/2018/01/16/18805901.php for one HUFFster’s sour view of the Monday downtown parade.

Updated Flyer Distributed in the MLK Police-Led “Peace and Justice” March Monday
by Robert Norse    Tuesday Jan 16th, 2018 1:49 PM
My brief report on the Monday MLK march.
The crowd was huge and the streets filled with people, banners, and music. Thanks in part to organizing by Santa Cruz Indivisible (which my friend Steve calls “Indistinguishable”), the NAACP (apparently no complaints about racism in the last year according to a staffer at their table), the RCNV (marching arm and arm with the armed and violent), and, of course, the main weapon-toters in town, the SCPD.

I also distributed a longer updated version of a flyer HUFF (Homeless United for Friendship & Freedom) has been distributing for several years, demanding radical changes in the SCPD. I’m attaching this flyer–which is the real point of this article.

I can’t deny I enjoyed the parade. But there was a superficiality to it all that bothered me later. In the face of the Happy Face mood, I found it harder than usual to focus on the hard questions that the one-day paraders were fluffing over. I found the dialogue between me and the cops I spoke to reduced to stereotyped acknowledgments, a kind of manufactured peace. Wasn’t it King who said “There can be no justice without peace and there can be no peace without justice.?”…

The false camaraderie helped to build the illusion that police are always trying to foster that they are “your friends”. In 2018 Santa Cruz, this is simply not true. Particularly for youth, activists, poor people, and people of color. It’s a treacherous assumption to start with. But it certainly helps police gather information, ignore embarrassing questions, and silence angry dissent.

Was King’s memory again being turned into a rallying platform for established politicians (Zack Friend, Andy Mills, a clot of reactionary City Council members) with no focus on actual racist practices here in Santa Cruz? Were we watching another organizing party for the Democrats, perhaps wearying of their latest anti-Russian hysteria–again with substantive issues of a local kind largely ignored (with the exception of some individual activists)?

Were we being sheepdogged again, Bernie Sanders-style, into the Brighter Day where we’d have the Happy Choice of a Wall Street Warmonger over a Racist Blowhard–all pushing the same lethal agenda in different language? Did reassurances from police officials and politicians mean we no longer had to face down class brutality, greedy landlords, compliant bureaucrats, and their armed guards with clarity, solidarity, anger and determination?

I’ll be playing interviews from the parade on Thursday evening (1-17) at 6 PM on Free Radio at 101.3 FM, streaming at freakradio.org. The show will archive at http://www.huffsantacruz.org/Lostshows.html a day later. 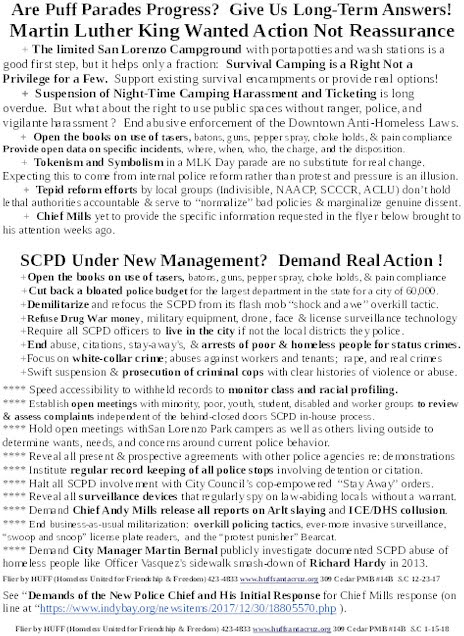