On the agenda:   Post-meeting tabling for the “Give a Shit” campaign to open the City Hall Bathrooms at Night,  the Latest from the Salinas Struggle to Save the Chinatown Encampment,  Wheelchair Chris Memorial on the Horizon for next Tuesday; Food and Sleep Reports from Freedom SleepOut #38; Public Be Damned!–Exclusion at the City Funded “Visitor’s Bathroom” at Bookshop Coonerty…and more!

Coffee and other questionables will also be available.

END_OF_DOCUMENT_TOKEN_TO_BE_REPLACED

Coming Up on this edition of Bathrobespierre’s Broadsides: Interview with Alene Smith, “Dangerous” John and “Do or Die” David Silva on the Louis La Fortune Memorial, Randy Girard on River St. Shelter vs. the Winter Armory Shelter, Hope for the Homeless on the West Side says “Shout it Out” Sharon,  Andy Carcello blasts the Homeless (Lack of) Services Center, Interviews with Salinas activist and mayoral candidate Amit Pandya, and Assemblyman Louis Alejo, “Punch Back” Paul Cook–the Boxing Lawyer on his latest victory in Baldwin Park, and the struggle for justice in Salinas’s Chinatown Nighttime Campout at City Hall & Daytime Defense of Chinatown continues.


Coming Up on this edition of Bathrobespierre’s Broadsides: the protest outside the Salinas City Hall with the homeless residents of Chinatown as well as activist Wes White, attorney Anthony Prince and Councilmember Jose Castillo.

Coming up for discussion and action:  Solidarity with the new Freedom Campers at Salinas City Hall, which began tonight; Salinas’s Jose Castenada–a Councilmember worth noting; Give A Shit!–Organizing and Marching to Open Up the City Hall Bathrooms,  Freedom SleepOut #37 Update, and more…  All between free cups of coffee, spats, snarls, and smiles.

END_OF_DOCUMENT_TOKEN_TO_BE_REPLACED

Coming Up on this edition of Bathrobespierre’s Broadsides Multiple Interviews with Sleeping Ban victims, street performers, and protesters; an hour long special phone interview with Salinas activists including Salinas Councilmember Castenada about the March 23 resistance to the Chinatown Demolition; and more…

Due to power outages and equipment problems, the usual Sunday morning Bathrobespierre’s Broadsides show was not available at its usual time.    The March 6 show intended for broadcast includes interviews with Food Not Bombs co-founder Keith McHenry, Berkeley singer and activist Carol Denney on the history of People’s Park, and my analysis of Lane’s Camping Ordinance amendments.

It is now available.

by Wes White (posted by Norse) 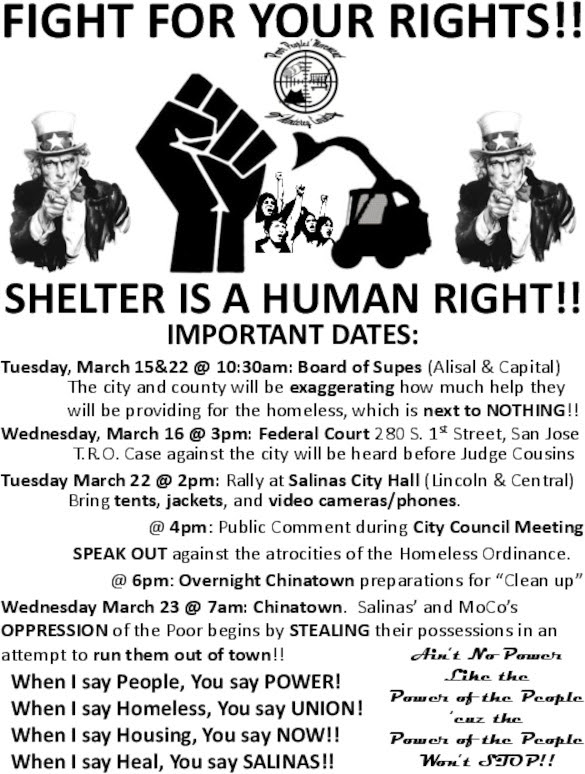 NOTES BY NORSE:  After weeks of protest camping out in front of its City Hall, Sacramento homeless activists have forced change.  Sacramento is discussing and its chief newspaper backing a Tent City as interim emergency shelter.  The San Jose City Council is doing the same.  Salinas activists, attorneys, and homeless residents of their Chinatown encampment have filed two lawsuits and announced a massive resistance campaign to begin March 22nd against gentrification deportation slated by greedy city bureacrats the next morning (HUFF activists may do a caravan–call 831-423-4833 if you’d like to join the resistance).  San Francisco supervisors are calling for a State of Emergency there (http://www.inquisitr.com/2868596/san-francisco-declares-state-of-emergency-supervisor-says-city-is-overrun-with-homeless-asks-california-to-intervene/ )  has significantly (though not adequately) improved shelter capability and conditions–while moving to disperse the Division St. encampment after pressure from right-wing columnists and the usual crowd of NIMBY’s.

Santa Cruz continues to make sleep at night a crime & close off all parks and green belt areas with uniformed ticketeers roaming the area to drive away the poor.  Freedom SleepOut #35 will continue its nine month long weekly protest in front of City Hall tomorrow evening (March 15th).   See indybay.org/santacruz for more details.   Independent activist Dogwood has called for a march from the Town Clock to City Hall beginning at 3 PM on that day.  HUFF activists will be discussing further protest and speak-out activity at the Project Pollinate gathering this coming Saturday March 19th at San Lorenzo Park at noon.  What’s next here depends on all of us.

City-sanctioned camp is worth a try over the summer
Pilot program would help with short-term housing needs
Long-term solutions still need to happen, but will take time


TO FOLLOW THE LINKS AND COMMENTS, GO TO: http://www.sacbee.com/opinion/editorials/article65032512.html 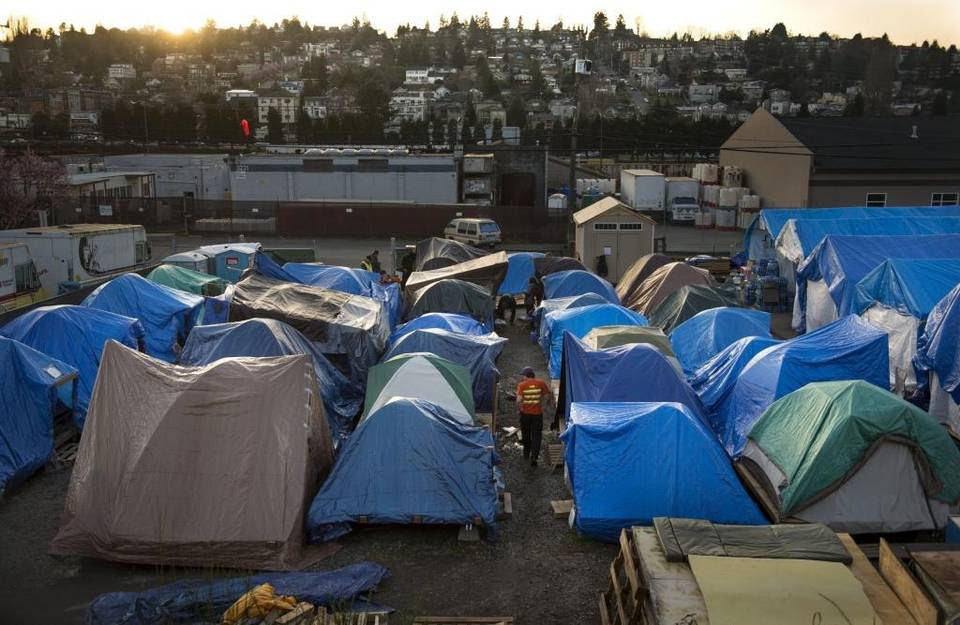 Rows of tents fill an authorized lot at Tent City 5 in the Interbay neighborhood of Seattle. Sacramento officials toured the city-sanctioned homeless camp as they consider whether to authorize a similar one in the capital. Lezlie Sterlinglsterling@sacbee.com
By the Editorial Board

Imagine there were tents on a grassy lot in Oak Park, Meadowview or Del Paso Heights. Dozens of them, pitched for homeless men and women with nowhere else to go.
If such a scenario makes you uneasy, we understand. For years, Sacramento officials have been talking about whether to sanction a homeless encampment. And for just as many years, the idea has been dismissed as inhumane.

Now, though, the inhumanity of homelessness has spread across the city and the county for all to see. Permanent housing, the true solution, remains elusive if not illusory. The idea for a “safe ground” is gaining ground. With other, more traditional solutions still falling short, it’s time for the City Council to stop talking about this and try it – if only for a few months, in a cautious and controlled manner.

We suggest a pilot program for this summer. A permit should be granted for one agreed-upon site that’s big enough to house a few dozen adult campers in tents. Use of drugs and alcohol should be banned inside the camp, but pets should be allowed. Sex offenders and people who are prone to violence also should be banned.
Access to basic amenities such as portable toilets, water and trash collection, would be a must. So should access to services so campers can take advantage of treatment for addiction and mental illness, and get on a list for permanent housing.

To be clear, this isn’t a long-term solution to homelessness in Sacramento. Critics accurately point out that it remains unclear whether these camps actually help get homeless people into permanent housing. The experiment in Seattle, where a large delegation from Sacramento toured its legal camps last month, is ongoing.

But to go a step further and say a camp – even a temporary one – would do nothing but provide a distraction from other, more legitimate methods for solving homelessness is inaccurate.
It’s a stopgap measure that can be put into place quickly and relatively cheaply, and address some shorter-term problems associated with homelessness while the infrastructure for longer-term solutions is put into place.

The way Seattle Mayor Ed Murray put it, the authorized camps in his city are “an answer to nothing except a warm and safer night to some people.” And for homeless people who would otherwise camp outdoors – disconnected from services, risking arrest, getting robbed and even death because there aren’t enough shelters or because mental illness makes it tough to sleep indoors – being warm and safe is indeed something.

In other words, a city-sanctioned camp is far from ideal, but for the time being, necessary. Consider the alternatives.

Last summer, in the midst of another year of drought, homeless campers trying to cook instead set fire to large swaths of the American River Parkway. The blazes were costly to put out and threatened nearby apartment complexes, prompting the county to spend even more money to hire more park rangers to confiscate cooking equipment and break up large campsites amid the dry trees and brush.

That said, people have been camping illegally and in unsafe, disgusting conditions on the parkway for decades – to Sacramento’s ever-lasting shame when Oprah Winfrey singled out the city for it in 2009.

Since then, the city has ramped up its stock of permanent housing with links to social services. But on any given night, there are still about 1,000 people outside in Sacramento County, most of them in the city. Homeless-rights advocates readily tell stories of fruitless efforts to get people into shelters and onto lengthy lists for housing.

Things are improving. There’s talk of rearranging space at existing shelters to accommodate more people, and work is being done with landlords to get them to accept more tenants. But these things will take time, and summer is coming.

In the meantime, homeless people, once primarily downtown and in midtown, have started to migrate into surrounding neighborhoods as the city has redoubled its efforts to spruce up the central city. Many of those neighborhoods are the same ones being eyed as potential sites for sanctioned camps: in City Council Districts 2, 5 and 8.

The group Safe Ground Sacramento is pushing for District 5, which covers Oak Park, Curtis Park, Hollywood Park, South Land Park and neighborhoods near Sacramento Executive Airport. For those neighborhoods, the question isn’t whether residents want homeless people milling about. That’s already a fact of life, even for the NIMBYs.

The question is, do those residents want to deal with homeless men and women one on one, particularly those wandering the streets with untreated mental illness and addiction problems? Or do they want to deal with homeless people living in a camp in their neighborhood, where the environment is so controlled that everyone is screened before they are allowed to enter?
There’s also the bigger question of whether those mostly poor neighborhoods should be forced to bear the entire burden of city’s homeless problem. We think not.

Whatever neighborhood the City Council chooses if it authorizes a camp next month, it should take the advice of Seattle Councilman Mike O’Brien and get residents involved early in the process to enlist their help selecting an appropriate site. The result, he told The Sacramento Bee’s Ryan Lillis, has been that many of the business owners who thought a homeless camp would drive away customers now acknowledge their fears “don’t seem to be materializing.”

A collection of tents on a plot a land in some Sacramento neighborhood is not a solution to homelessness. It is an admission that society has failed the thousands of people who have no roof. The notion of a safe ground, flawed though it is, could help and, therefore, it’s worth a try.