Tales of tenacity and terror from the now-nightly Survival Sleepers.  Come on down to offer blankets, food, audio and video support, and just a hearty hello!

Check for prior shows at http://radiolibre.org/brb/ ,  Some descriptions available at http://www.huffsantacruz.org/brb-descriptions.html .

After surprise victories at City Council with new Councilmembers Brown and Krohn, HUFFsters will assess the looming end of the Winter shelter program, the persistent presence of nightly sleepers at City Hall, and various other unmentionables along with coffee and crunchies at the Sub Rosa Cafe.  Join us and learn more!

Also on tap:  Upcoming City Council meeting to include claims against the City by Sean Arlt’s relatives at 1:30 PM Tuesday 3-28,  Poetry by Berkeley Street Poet Julia Vinograd, the anti-Cannabis Conspiracy moves of the Supervisors–an Interview with Pat Malo, Interviews galore with the nightly Dreamseekers at City Hall struggling to reclaim the right to sleep (while resisting uniformed thugs with nightsticks, tasers, and ticketbooks ordering them out into the rain)…It’s a long one–5+ hours.  Have coffee and a soft chair ready.

Archives at http://radiolibre.org/brb/brb170326.mp3 in case you missed it.

Featuring edifying commentary from that incessant commentator, Bathrobespierre Robert along with scattered interviews from the  forbidden Post Office fence, and the growing nightly encampment at city hall.

Topics to chew on while downing tea or coffee include: the now daily sleep-out at City Hall, Peering at the Latest Public Records Info (or lack thereof) on the ICE/DHS correspondence with “the dog ate the e-mails” Police Chief Kevin Vogel, A Response to the Selective Enforcement Antics of Rangers and Cops on Pacific Avenue in the “Performance Pens”, and more !

Updates on the latest attacks on Food Not Bombs and the Post Office Fence Decorations, Cornerstone Carol Denney on Berkeley Bamboozing; Part 2 of Keith McHenry’s 3-10 “Activists Awake” Presentation, J.C. Orton on the Inner Workings of the Shelter System,  and First-They-Came-For-The-Homeless Activists, Freedom SleepOut #88, and (whew) yet more.  Listen if you dare.

Still offering $500 reward for anyone who can hook us up with a rental space 10′ X 10′ for a year with access to internet, electricity, and bathroom access.  Help Save Free Radio!

Following up on Freedom SleepOut #88 and the latest City Clownsel meeting where police-compliant Council members passed a toothless Sanctuary Ordinance that doesn’t provide real protection for undocumented aliens and certainly not local homeless refugees…HUFFsters may be preparing for a Meeting Tonight 7 PM at the SCPD “Community Room” to look over replacements for Chief Vogel who’s retiring in June, gearing up to meet with Council member Sandy Brown this Friday to get some answers to questions raised for her and Council member Krohn, prepping for a City-supported  “Homeless Info” get-together Saturday morning, SCPD’s latest attack on the Freedom Sleepers–refusing to return stolen survival gear; and more !    We got the coffee, you bring the courage !

Location Details Join the fun in front of City Hall at 809 Center St. on the brick entranceway to the “City Hall Courtyard”from Tuesday Afternoon through Wednesday mid-morning. The area was declared a “park” to give Parks and Recreation Rangers power to exclude homeless folks guilty of nothing but sleeping there at night in an unprecedented due process-free process on pain of a year in jail. Food and festivities will begin near (or perhaps inside) City Council chambers. The Gang of Seven will finalize an empty Sanctuary law that provides no enforcement provisions, nor accountability for Chief Vogel’s concealment of an ICE agent for the last 8 years. While Council creates a phony “Sanctuary” for the undocumented, real sanctuary for the local homeless isn’t even on the table.

CAN’T DRIVE OFF THOSE FREEDOM SLEEPERS
Freedom Sleepers will be returning Tuesday afternoon and evening as the weather turns warmer with videocam capability at the ready to discourage and document abusive behavior and false statements by cops and rangers–who have freely stolen homeless gear and lied to protesters about their rights.

POLICE THIEVES STILL HOLD HOMELESS GEAR
Homeless survival gear has not been returned to Lawrence MacGregor or Dreamcatcher–a large tent in Lawrence’s case; ID, a mobile carrying cart and many other items for Dreamcatcher.

PHONIES PROPOSE TOOTHLESS LAW WITH THEIR POLICE SHUTTING OUT THE LARGER COMMUNITY
Item #14 on the Afternoon Agenda is the 2nd and Final Reading of the Sanctuary Ordinance which “forbids” city employees (including police) from “requesting, disclosing, or maintaining” immigration status information or aiding in enforcement (with plenty of exceptions) as well as informing City Council (but not the community) AFTER but not BEFORE immigration raids occur. There are no penalties for those who violate the law and no right to sue the City if it acts contrary to this law.

The Council meeting will again be held in the City Council chambers instead of the larger Civic Auditorium–this time in mid-afternoon. This means a large crowd of people can be excluded, as happened last time with a heavy police presence and folks kept out in the cold while the Council presented its fluffy resolution and law as a figleaf to cover SCPD collusion with ICE/DHS abuses.

MEMORIAL PLANNED FOR APRIL 11TH FOR HYPOTHERMIA VICTIM AT FREEDOM SLEEPOUT #92
Keith McHenry notes “53 year-old Micheal Mear died of hypothermia on February 17, 2017. Medical staff reportedly told his sister his body temperature was only 70 degrees when a motorist found him unconscious on Potrero Street. He died soon after from cardiac arrest at Dominican Hospital.”

“STARVE ‘EM OUT OF SIGHT” BIGOTS ERECT CHAIN LINK FENCE AROUND DOWNTOWN POST OFFICE
“Protect my $140,000 condo downtown” may be the real motivation for Janet Fardette’s petition to drive away Food Not Bombs from its Saturday and Sunday meals on the sidewalk near the main post office. While Fardette’s on-line petition has only cleared 100 names, McHenry’s counterpetition boasts of over 1000.

Freedom Sleeper activists, grateful for Food Not Bombs regular feedings at the Tuesday Freedom SleepOuts, encourage folks to stop by the SleepOut as well as the Saturday and Sunday meals outside the Post Office (4-6 PM) to sign letters to the Postmaster, emphasizing the importance of the Food Not Bombs meals and community gatherings.

To read more details on the Post Office’s most recent uglification campaign erecting a “separation fence” as well as the festive community response, go to “Anti-Homeless Fence Decorating Party”at https://www.indybay.org/newsitems/2017/03/13/18797382.php

Berkeley and San Francisco have resisted profiteering attempts to privatize local post offices successfully erecting and sustaining homeless encampments in front of the threatened buildings. The protests sprang from First They Came for the Homeless [FTCFTH]–which evolved from the Occupy movement. Assembling and refusing to stay dispersed next to these buildings has been the tactic used. It’s unclear whether Santa Cruz will adopt a similar strategy, but one Berkeley activist has declared himself ready to “hop on the next bus down” to support such a move. FTCFTH has now gone two months without a warning or bust after being threatened, harassed and/or attacked by police more than 15 times.

CITY CLAIMS TO WANT “COMMUNITY INPUT” IN SEARCH FOR NEW POLICE CHIEF
Go and make your concerns about the SCPD’s collusion with ICE/DHS, its “shoot to kill” policy, its failure to hold individual officers or the chief responsible for human rights abuses by attending meetings: Wednesday, March 15th in the Police Department Community Room (155 Center St Santa Cruz) from 7:00-9:00pm. and Thursday, March 16th at the Beach Flats Community Center (1333 Leibrandt Ave. Santa Cruz) from 7:00-9:00pm. Both events will be bilingual.

In the past, only large numbers of people have gotten even a limited response from the police and their politician friends as happened February 14 when shouting activists disrupted a Council intent on gagging a speaker victimized by the ICE/DHS raids the day before.

Streaming today at freakradio.org, the show will cover updates on the Cannabis Crackdown, the Struggle Against the Sleeping Ban, and Keith McHenry’s History of FNB among other things.  The show will archive at http://radiolibre.org/brb/brb170312.mp3.

Anti-Homeless Architecture — Anti-Homeless Fence at the Post Office in Santa Cruz
by Keith McHenry (keith [at] foodnotbombs.net)
Thursday Mar 9th, 2017 7:52 PM
A safe dry shelter for over a dozen of our homeless friends is now being fenced off and one of our city’s most historic and beautiful buildings is being defaced. 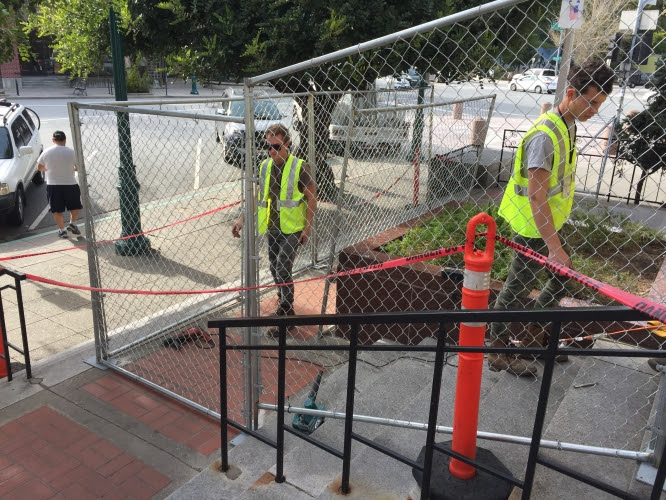 original image (3264×2448)
ANTI-HOMELESS ARCHITECTURE – Anti-homeless fence at the post office in Santa Cruz. Historic building being defaced. A safe dry shelter for over a dozen of our homeless friends is now being fenced off and one of our city’s most historic and beautiful buildings is being defaced. Bathrooms, housing and services could have been provided but officials find spending tax dollars on anti-homeless redevelopment is a better use of money.Santa Cruz is big on the use of anti-homeless architecture installing high frequency sound machine’s call Mosquito Boxes in parks and along the San Lorenzo River to drive the homeless away from under the bridges, removing the planter boxes and free speech zones on the Pacific Avenue Mall, and replacing the lawn at City Hall with gravel and rocks and now the ugly chain link fencing at the historic downtown post office.

Along with anti-homeless architecture comes the sleeping ban which makes it illegal to sleep outside at night and illegal to sleep under a blanket. A law that can contribute to the death of our friends like 53 year-old Micheal Mear who died of hypothermia on February 17, 2017. Medical staff told his sister his body temperature was only 70 degrees when a motorist found him unconscious on Potrero Street. He died soon after from cardiac arrest at Dominican Hospital.

I was heart broken when we ran out of blankets during the Tuesday, March 7th Freedom Sleepers sleep-out, turning away several desperate people. Michael’s sister Jerry cried as she asked me why he didn’t even have a warm blanket to save his life. I didn’t have the heart to tell her it was illegal to sleep protected from the cold.

They will never be able to drive poverty out of sight unless they make housing affordable. Instead it looks like the liberals are making their move using the chaos of Trump to camouflage their anti-homeless cruelty.

The community is so anti-homeless it is even willing to deface its own beautiful historic post office with an ugly chain link fence. J.M. Brown’s article in the Santa Cruz Sentinel “The 1912 Renaissance Revival building — the oldest continually operating California post office on the National Register of Historic Places — was modeled after the 15th century Filippo Brunelleschi’s Foundling Hospital in Florence, Italy. It is home to four priceless murals by the American artist Henrietta Shore.”

“Inspired by classical Renaissance style, the design asserts the building’s importance to civic life and confidence in the community’s future — a message repeated in countless schools, banks, libraries and other civic structures from the same period,” said former mayor and history buff Cynthia Mathews. “With its dignified, graceful detail, quality materials and prominent location, the Santa Cruz Post Office was intended to reflect the community’s importance, identity and aspirations, and it remains a defining feature of our downtown today.”

…the latest front in the spread of ‘defensive architecture’.

Is such open hostility towards the destitute making all our lives uglier?
https://www.theguardian.com/society/2015/feb/18/defensive-architecture-keeps-poverty-undeen-and-makes-us-more-hostile