HUFF remnants will be patching together plans and pondering afternoon protests at the usual time and place (though we’ll be outside in the Courtyard).  Likely for discussion:  Solidarity with Black Lives Matter from an unhoused perspective; a strategy for preempting the usual City Council psuedo-election race; supporting Lucero and other activists engaged in direct protest or civil disobedience downtown…and more with or without coffee, your choice!

Freedom Sleep #55 To Follow Pacific Avenue Protests
Date Tuesday July 26
Time 5:00 PM – 9:00 AM
Location Details Using the public City Hall Courtyard until police drive the public out at 10 PM when sleepers will bunk down on the sidewalk.
Event Type Protest
Organizer/AuthorKeith McHenry (posted by Norse)
Email keith@foodnotbombs.net
Phone 575-770-3377
Freedom Sleepers will again claim sidewalk sleeping space in front of City Hall Tuesday night. The activists will defy the Mathews’ Council’s anti-homeless 11 PM- 8:30 AM Sleeping Ban still being used throughout the City to harass, cite, and “move along” unhoused people in the dead of night.

Food Not Bombs may be providing food support and Jumbogumbo Joe Schultz coffee and soup.

VIVID COVERAGE OF PRIOR FREEDOM SLEEP-OUT’S
Alex Darocy’s vivid photographic and narrative coverage of the last several sleepouts can be found at https://www.indybay.org/newsitems/2016/07/25/18789435.php (“Tuesday is Still the Night to Sleep at Santa Cruz City Hall”). Darocy provides regular coverage of the sleep-out’s, which can be seen through searching for “Darocy” on the indybay.org/santacruz website.

They passed two ordinances banning RV parking from 8 PM to 8 AM, denying homeless people the right to get permits, and empowering the city engineer to begin eliminating ‘oversized” parking spaces and criminalizing vehicles that use more than one space.

The Coastal Commission will hear activist Robert Norse’s appeal on the more limited midnight to 5 PM RV ban, intended mainly–testimony from neighborhood NIMBY’s made clear at the time–to drive away homeless folks. The commission will meet Wednesday, August 10 at 9 AM at the Hilton Santa Cruz/Scotts Valley at 6001 La Madrona Drive.

UPCOMING COURT TRIALS FOR ARTISTS ALEX SKELTON AND JOFF JONES
Jones and Skelton have been arrested repeatedly for displaying their art work outside the small and sparce “exempt zones”, designated by small brass discs and blue dots on the Pacific Avenue sidewalk.

The two were unexpectedly acquitted last year by police powerpuffer Kim Baskett, Commissioner of Dept. 10. Now the two face four new charges of violating MC SC 5.81(A)-1 (displaying art outside the blue box and/or not moving every hour). Two of these charges go to trial at 1:30 PM in the basement of the County Building, adjacent to the courthouse on August 30th.

This will be the first challenge to the City’s recent “Vanish the Vendors” law. This ban on handicraft creation, display, and sale along Pacific Avenue and side streets reiterates and reinforces the reduction of art/performance/tabling space which went into high great in 2013, created the “blue boxes” in 2014, and then cut their number down by half in 2016. Commissioner Basket will hear the case without a jury. The two artists don’t have a court appointed lawyer and haven’t mentioned that any local legal eagle has volunteered to help.

More info on the Freedom Sleepers is frequently available at https://www.facebook.com/groups/freedomsleepers/ . Donations of food, blankets, sleeping bags, and energy are always welcome.

This calendar event description was written by Robert Norse, who is alone responsible for its content. 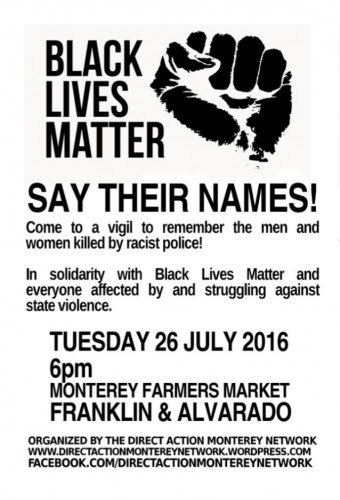 original image (638×936)
For more event information:
https://www.facebook.com/events/1044991515…
The show features scintillating and soporific street interviews, some badlands Berkeley history with handicapped commissioner Dan McMullan, music lifted from You-tube by Ryan Greer, street performers and artists joyfully fighting back against the Vanish the Vendors laws, and just lots of stuff !  Five hours worth!   If you miss the show or want to hear it at another time, check out:

Santa Cruz’s bigot-pleasing Good Times  has recently covered its typical smear campaign against the outside poor with environmental concern protective cover.  See “Saving Lighthouse Field” at http://goodtimes.sc/cover-stories/saving-lighthouse-field/
Santa Cruz’s Parks and Recreation Department and the SCPO have long proclaimed its right to dumpster and destroy homeless survival gear and has lately been doing that, according to participants in the 54-week long Tuesday night Freedom SleepOut’s at City Hall.   Retrieval of homeless property (in those instances where it is saved rather than trashed) can only be done during a two hour period (12:30 – 2:30 PM) on Tuesdays and Thursdays in spite of bloated police budget.

Parks and Rec thugs-in-white now regularly “patrol” the Downtown Area in white shirts (no white hoods yet)in search of performers, vendors, and activists who are sitting outside the scattered blue and brass boxes (Performance Pens) being used to constrict, coral, and discourage non-commercial activity on Pacific Avenue, the Wharf, and elsewhere. SCPD’s Officer Hoppe has reportedly been jailing impoverished homeless panhandler for peacefully holding up a “help me” sign on the median at Ocean and Water streets.

Undefeated visual artists Alex Skelton and Joff Jones face hundreds of dollars in fines in court next month after five in-custody arrests for displaying their paintings on Pacific Avenue “outside the boxes”.  Meanwhile fascist-friend City art critics have driven away handicraft artists on Pacific with new laws banning creation, display, or sale of any artwork or perfomance that may have “a functional use” such as jewelry, t-shirts, massage, crystals, etc.  Laws banning RV’s from parking late at night anywhere in the city await likely Coastal Commission approval–with homeless people explicitly denied the right to purchase permits.

END_OF_DOCUMENT_TOKEN_TO_BE_REPLACED

Further discussion of police abuses locally (See “Race and Class Bias in the SCPD–What’s the real Story?” at https://www.indybay.org/uploads/2014/12/03/grand_jury_protest_updated.pdf ).   How to use the election campaign to raise real issues and take real action.  Direct action to stop social service surrender to the Take Back Santa Cruz mentality.   Avenues for supporting righteous resistance to the Performance Pens downtown.   And, as always more!

You bring the issues; we got the coffee.

Location Details At the usual center of “get out of town” enforcement against the poor and homeless–Santa Cruz City Hall at 809 Center St. between Locust and Church.

Another night of providing (relatively) safe space for unhoused folks on the sidewalk against the City’s 11 PM to 8:30 AM Sleeping Ban.

Another night of showcasing the City’s hostility to basic services to the poor (closed restrooms at night, security guards snitching on sleepers to police, police rousting people at night but giving them nowhere legal to sleep).

Another night of calling on the community to stand up to the torture of Sleep Deprivation in Santa Cruz and explode the “most progressive City” myth.

Another night of solidarity against police and vigilante abuse city-wide to those in poor, whether outside or in vehicles.

Another night of providing a brief community space for those who gather around the food and drink (sparsely) provided by Food Not Bombs and JumboGumbo Joe Schultz.

Another night of solidarity with Black Lives Matter protesters and local protests like Curtis Reliford’s local “Follow Your Heart” demonstrations.

For homeless updates and reports on last week’s SleepOut, go to http://www.huffsantacruz.org/Lostshows.html and click on the links under Lost Show 7/17/2016 .

This notice prepared by Robert Norse and reflects his perspective (and likely those of others!)

In the wake of the well-publicized police murders nationally,  I’m encouraging HUFF to turn its attention to police abuses locally and follow up on our 2014 campaign.  (See “Race and Class Bias in the SCPD–What’s the real Story?” at https://www.indybay.org/uploads/2014/12/03/grand_jury_protest_updated.pdf )

Perhaps we can propose local actions at the Project Pollinate Friday 7 PM meeting at 703 Pacific 7-15.

Bring your issues; we supply the coffee tomorrow.

Going Into Year 2 with the Freedom Sleepers

In the aftermath of the latest Freedom SleepOut at City Hall, (#52 making a year of Tuesdays there),
HUFF will stagger and struggle to its usual rendezvous point with coffee and cookies as bait.

Some possible chattering points:  Demands from the Freedom SleepOut the night before;
Supporting Vendors, Performers and Homeless Downtown in the wake of the Vanish the Vendors crackdown;
Jailtime Blues–recent behind-bars abuses;
Wrenching the upcoming City Council race;
and more, depending on who shows with how much energy…