Free Radio broadcasts at 101.3 FM and streams at freakradio.org.
FLASHBACK TO JUNE 22, 1997
The show archives under Lost Shows on the HUFF website at http://www.huffsantacruz.org/Lostshows.html.   Look for Latest Show – 6/28/2018  Thursday, June 28, 2018 – Bathrobespierre’s Broadsides.

HUFF [Homeless United for Friendship & Freedom] will meet Wednesday, 6-27 11 AM at the Sub Rosa, our normal meeting place, next to the Bike Church.

Portapotties and handwashing stations are no longer available in San Lorenzo Park as they were last fall.

The nighttime-only portapotty on Cedar St. is not disabled accessible.

Locust Street garage bathrooms have the exposed peek-a-boo spaces in the stalls that compromise the privacy and dignity of user. Staff and cafe patrons are given keys to the cleaner, more spacious, closed private bathroom nearby owned by the City.

The portapotty rented by Food Not Bombs two weeks ago for use as a 24-hour facility by the Community at the intersection of Front, Pacific, and Mission streets has been removed, apparently on orders of the City and not replaced.

No new Sharps containers have appeared in any bathrooms to deal with the problems of needle disposal.

Parks and Recreation boss Carol Scurich has not revealed any documents specifying the reasons, costs, and private discussions resulting in the closing of the Louden Nelson bathrooms to the general public in spite of promises to do so.

City Manager Martin Bernal is Scurich’s boss and has been invited to answer obvious questions about this public health and safety threat. It impacts the local elderly and disabled as well as tourists and the broader community. It also seemed to be part of a sustained and direct attack on unhoused people, scapegoating them in response to unsubstantiated fears by some pressure groups in the community.

Come to the City Council Courtyard Fountain area at 1 PM Thursday June 28th to speak out on the issue, direct questions at Martin Bernal and other city officials.

Food and refreshments will likely be available as will music.

Be creative in your dress and accessories. Bring TP and other sanitary necessities.

The protest may involve a Downtown Toilet Tour as well, led by HUFF (Homeless United for Friendship and Freedom’s “Give a Shit” Committee).

Conscience and Action was formed as a tribute to long-time Sleeping Ban fighter David Silva who died last spring overseas. 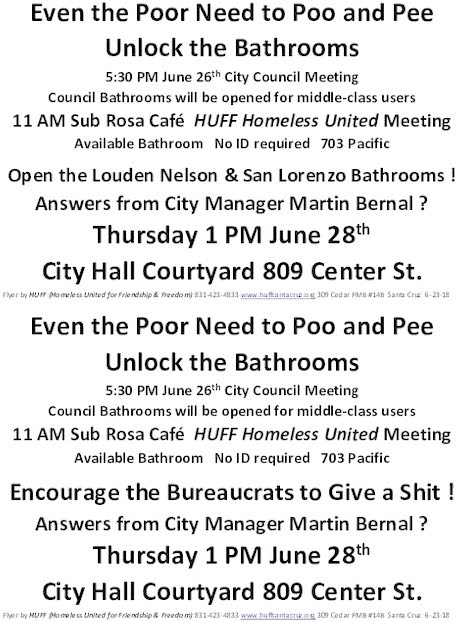 This show archives June 24, 2018 at http://www.huffsantacruz.org/Lostshows.html

Conscience and Action  activists will be joining the Poor People’s Campaign rally at the main post office today in downtown Santa Cruz.

This will be at 1 PM (not Noon as previously scheduled) to table, make signs, and distribute flyers.

We are slated to speak between 2:30 PM and 3 PM when the main gathering begins.

For more details on the campaign  Unlock the Louden Nelson and San Lorenzo Park bathrooms, see “Conscience and Action Speak Out at Parks and Rec” at https://www.indybay.org/newsitems/2018/06/14/18815686.php

Free Radio broadcasts at 101.3 FM and streams at freakradio.org.

The show archives under Lost Shows on the HUFF website at http://www.huffsantacruz.org/Lostshows.html.   Look for Latest Show – 6/21/2018  Thursday, June 21, 2018 – Bathrobespierre’s Broadsides.

Two follow-up protests and an organizational meeting are happening, according to Conscience and Action, which posted the following on Santa Cruz Indymedia: 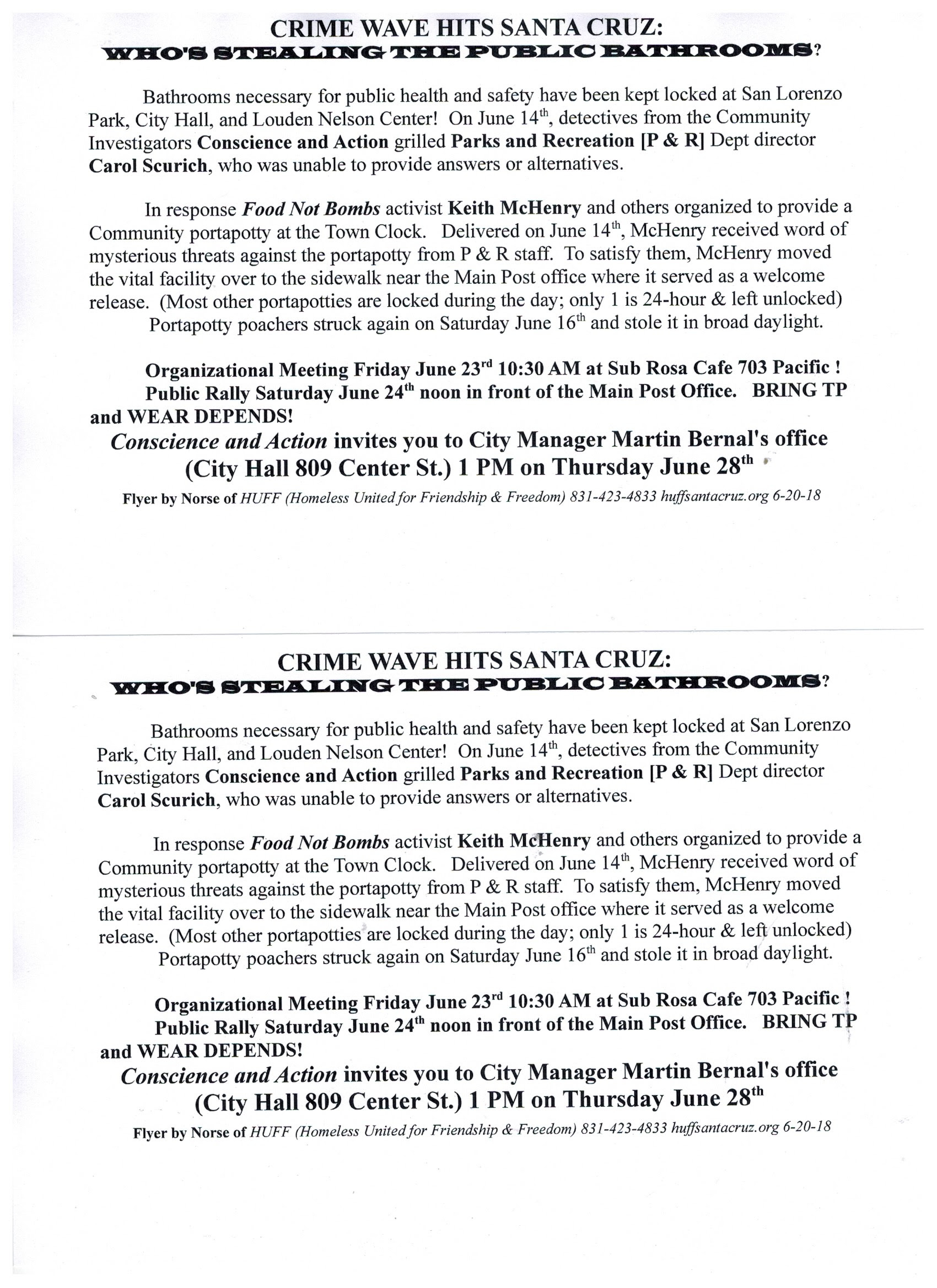 Conscience-in-Action, the Coalition of groups and individuals who demanded reopening of the Louden Nelson and San Lorenzo Park bathrooms will meet again Weds. at 11 AM at the Sub Rosa Cafe (703 Pacific next to the Bike Church).

On the agenda is a proposed action from Ed Frey demanding documented accountability from politicians local and national.

Up for discussion is a speak-out on Pacific Avenue, possible while standing on vehicles.  We may also be considering follow-up actions to restore decency, public sanitation, and fair access to toilet facilities for everyone in Santa Cruz.

Other possibilities HUFFsters may present include Direct Action to Block the New Library-in-a-Parking-Garage proposal.

HUFF (Homeless United for Friendship & Freedom) meets again June 27th 11 AM at the Sub Rosa.  HUFF reps will be at tomorrow’s Conscience-in-Action meeting on June 20th.

The 20th Annual Homelessness Marathon, for those who missed it, is archived at http://ku.audioport.org.  Just scroll down to June 12th, and
you’ll find it.  Unfortunately, the hours from 3-5 p.m., EST didn’t .

Hour 2 – 10:00 – 11:00 a.m. – Paul Boden, field director for the Western Regional Advocacy Project on the “Right To Rest” and “Housekeys Not Handcuffs” movements; Amanda Brown-Hunter, head of an Amarillo homeless camp that is in hiding,

Hour 6 – 2:00 – 3:00 p.m. – Helena Liikanen-Renger, Press Counselor for the Embassy of Finland will discuss how it happens that Finland is housing all of its rough sleepers, while the rest of Europe is in a homelessness crisis.

Hour 8 – 4:00 – 5:00 p.m. – Attorney Jason Flores, who is suing Denver on behalf of the homeless. Then journalist and activist Mike Rhodes with an update on homelessness in Fresno.

Hour 9 – 5:00 – 6:00 p.m. – A conversation with Bill Higgins, a former submarine officer who became homeless (right before Trump took office, he told us how happy he was that Ben Carson was to be HUD Secretary, but that’s not what he says today). Then, attorney Judith Berkan, will speak from Puerto Rico on hurricane recovery.

Hour 11 – 7:00 p.m.- 8:00 p.m. – Kent Anderson, Chief High Risk Services Officer, Waikiki Health, will report some facts on just how young kids there are when they become homeless and what happens to them. Then a look at homelessness in Portland, ME.

Hour 8:00 p.m. – 9:00 p.m. – “A DC Street Poet, His Reflections and His Lawsuit.” Then Richard Tripp’s Taxi to Heaven, a memorial for homeless advocates who have died since our last broadcast, Richard Tripp among them.

Streams at freakradio.org and broadcasts at 101.3 FM

This show archives June 19, 2018 at http://www.huffsantacruz.org/Lostshows.html

A flashback show from January 7, 2001 featuring

Because of time limitations, the flashback begins half an hour into the original show.  To hear the beginning of that original show go to http://huffsantacruz.org/lost/F%20BB%201-7-01.mp3 .

Report from the “Open the Bathrooms” Protest taking place today (June 14 noon) beginning in front of the Parks and Recreation Department at 323 Church St. will likely be available on the Sunday June 17th show 9:30 AM.
Free Radio, as usual, streams at freakradio.org.  The show archives under Lost Shows on the HUFF website at http://www.huffsantacruz.org/Lostshows.html.   Look for Latest Show – 6/14/2018  Thursday, June 14, 2018 – Bathrobespierre’s Broadsides.