The show features interviews with Becky Johnson of HUFF (Homeless United for Friendship & Freedom) and Wes White of the Monterey County Union of the Homeless reporting on the shutdown of the small homeless shelter services in Salinas.   Robert Norse will also review the last City Council meeting and tune in on conversations outside at Freedom SleepOut #94.

Wes White’s many Peace and Justice videos can be found on You-Tube at John Doe 13K.

Older Bathrobespiere’s Broadsides shows (hundreds of them now) are archived on the HUFF (Homeless United for Friendship & Freedom) website at www.huffsantacruz.org .

The Sunday April 30th show will be archived at http://radiolibre.org/brb/brb170430.mp3

The show also streams at www.freakradio.org

HUFFsters will discuss the growing Survival Encampment at City Hall, the upcoming Community Control of Police Forum this Weekend, and Prep for the May 9th “No Penalty for Poverty” March on City Hall.  Also on the horizon:  Combating New Anti-Homeless Ranger Rousts, Surveillance on the Levee, and the latest SCPD attack on Survival Tents on the Sidewalk.   Coffee for the curious, the cranky, and the concerned alike.

For those who want to help challenge landlord greed, check out 1612 Mission St. at noon today, when the Santa Cruz Tenants Organizing Committee [SCTOC] will be protesting and holding an auction after the landlord there advertised a room at one price, then threw applicants into a bidding war.  Suggested bids: Soul-crushing student Debt, Three People sleeping in My Living Room, etc.   The SCTOC meets again next Monday 6 PM 501 Mission St.

END_OF_DOCUMENT_TOKEN_TO_BE_REPLACED

4 PM Main Post Office Forbidden Fence
5 PM City Hall
Throughout the Night: Inside and Outside City Hall
While the federal government continues its efforts to eradicate the social safety net, the cost of housing in Santa Cruz continues to rise, creating an unstable situation locally, and leaving many of our poorest residents without homes. Local action to reduce the cost of housing and provide homes for all is long overdue.

A protest and march calling for a commitment to house all residents will begin on the steps of the County Building at 3:30PM on Tuesday May 9th, continue to the Post Office (which recently fenced its grounds to prevent people without homes from having access) and arrive at City Hall at 5PM in time for oral communication. The County Building is at 701 Ocean Street in downtown Santa Cruz. The City Hall is 809 Center Street.

Activists are calling for local government to take steps to insure that housing is available at a reasonable rate, to provide emergency shelter for the houseless, and to decriminalize sleeping, among other measures.

Sherry (last name withheld to avoid persecution by City officials) has been sleeping at City Hall for a week since the winter shelter closed and left her without a place to be. “At least here,” she says, “I feel a little bit safer. It’s public and there are people around. Plus I like supporting other people who are in the same situation as me.”

Rabbi Philip Posner was a freedom rider who spent 39 days in jail in Mississippi in 1961 as part of the civil rights movement. He views the treatment of the homeless as this generation’s call to conscience “A legal place to sleep is a human right. Criminalizing the homeless amounts to penalizing people for being poor.” Posner and his son Micah plan to sleep out at City Hall after the demonstration in solidarity. They are inviting people with and without homes to bring sleeping bags and join them in the unsanctioned act of sleeping on public property.

Looks like the threat of disinvestment from Granite Construction may have discouraged them from bidding for the anti-immigrant Trump wall on the border (Item #2 7 PM Agenda).     Council may also support disinvestment from Wells Fargo for its support of the Dakota Access Pipeline (Item #3 7 PM Agenda).  However at Tuesday night’s 4-25 Council meeting the Council will still be considering a “cost-effective” fence along the levee along with increased cops, surveillance cameras, and lighting to add to the “no loitering” enforcement, forbidden to sit rules, and high-pitched anti-homeless “Mosquito” boxes along the levee.

BAD NEWS AT 7 PM
Agenda item #1 on the 7 PM Agenda of the last City Council meeting in April has the following item up for a vote:

TO READ THE STAFF REPORT: Go to item 1 on the evening agenda at http://scsire.cityofsantacruz.com/sirepub/mtgviewer.aspx?meetid=856&doctype=AGENDA .

The flowery language masks the reality: $138,000 for more cops and copcars (technically Rangers and their Rangermobiles) to move along and drive away the poor from the levee area, $50,000 for “security” cameras, $24,000 for lighting upgrades, and $5000 for a “Public Engagement Summit”
Also on the conveyor belt is proposed fencing along the levee, as they look for a cheaper contractor.

The previous “Summit” in March had no representation from renters, the unhoused, civil liberties groups, minority interest groups, or students. The proposal is being pushed by the true bosses of the City Martin Bernal and his underling Scott Collins–City Manager and Deputy City Manager respectively who remain unaccountable to the community and receive no regular public scrutiny by any independent oversight body.

THE POLITICAL LANDSCAPE
Recent mass marches have highlighted opposition to Trump’s misogyny, his immigrant hostility, his tax returns concealment, and his “alternate science” weltanschauung and the upcoming Trump’s Climate Confusion walk next Saturday. There is little if any acknowledgement of the broader collusion or indifference of local politicians on prior policies which set the stage for Trump’s toxic expansions.

The most obvious aspect of this is the local silence in the face of recent bipartisian saber rattling and hypermilitarism escalating foreign wars that thrived under Obama (and that Clinton vowed to continue). Local opportunist Democrats are heightening the danger with ramped up Russophobia and McCarthyite hysteria to justify Clinton’s defeat and push Trump out of power (so we can get Pence?).

The same local misfocus is also true of any pressure for politicians to be locally accountable. However, item ##2 and 3 on the evening agenda involving divestment from Granite Construction and Wells Fargo on the evening agenda do indicate a positive change–though again, prompted by distant national issues and heavy Democratic Party mobilization “against Trump”.

Where there is no improvement–in fact, further deterioration, is around poverty, houselessness, and local policing.

FENCING FOLLY AN OLD STORY
The City’s involvement with the recent chain link fence at the downtown post office has been unclear in spite of e-mails from Councilmembers Mathews and Niroyan hostile to Food Not Bombs weekend meals there.

The post office fence is likely part of the drive against homeless sleepers under the eaves at night and Food Not Bombs patrons on the steps during the weekend. The alleged “Construction” supposedly being undertaken there has yet to appear–and it’s been weeks.

The whole thing is reminiscent of the phony “plant restoration” pretext given to rope off the levee space near the Soquel St. bridge across from CVS back in 2010. See “City runs off Drum Circle again, cuts down trees and cements AREA CLOSED signs along levee” at https://www.indybay.org/newsitems/2010/07/29/18654907.php .

To register your opposition to the City Council’s latest gentrification move on the Levee, e-mail them at citycouncil [at] cityofsantacruz.com . To consider more direct action protest, check out the HUFF (Homeless United for Friendship & Freedom) meeting at 11 AM-1 PM Wednesday at the Sub Rosa Cafe at 703 Pacific, or give a call to 831-423-4833.

END_OF_DOCUMENT_TOKEN_TO_BE_REPLACED

Also updates from Freedom Sleep-Out #93 last week, rumors of plans to add cops at and remove benches from the library, plus tidbits and numnums of all sorts.  Tune in and settle in.  Then check out the Survival Sleeps who gather nightly at City Hall.

Streams at freakradio.org.  Archives at http://radiolibre.org/brb/brb170423.mp3 .

HUFF Agenda Prospects:   Recruiting Survival Sleeper Monitors at Upcoming Events,  A Strategy for the Last City Council Meeting in April, Prep for the May 1st and May 9th Protests, Nightly Survival Sleeping Prospects–Expanding the Survival Sanctuary Support Network,  PhoneBank Outreach to Allied Organizations, Update on the Handicraft Ban Downtown…and cups of coffee to numb the frustration.

For the last 10 nights since the Winter Shelter program ended (a month earlier than Berkeley’s or Salinas’s), some of its refugees have been camped at City Hall, spending their nights and some of their days there as well.

Some are arrayed just outside the offices of Mayor Cynthia Chase and the same Council majority that kept sleeping a crime in a Council vote last spring.

I’ve written a flyer or two about the issue & distributed it at “liberal” activist gatherings like the Indivisible rally Saturday. So far no Indivisible groups have expressed interest in the 1000-2000 unsheltered or protesting local Trumpism here against our own poverty refugees. 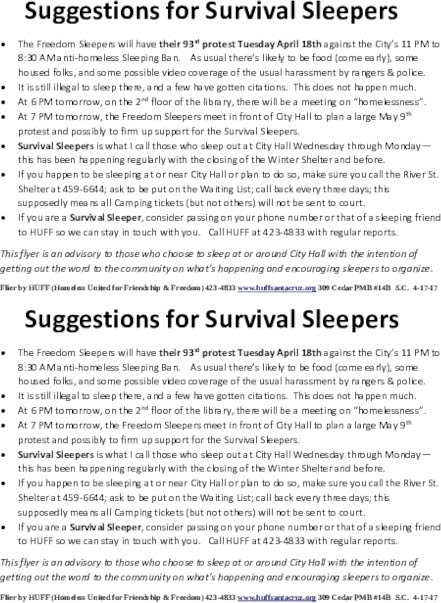 (492.0kb)
Survival sleeper Lawrence MacGregor reports police and security thugs driving disabled and elderly sleepers out from under the eaves of City Hall into the rain over the weekend. Another sleeper reported police and rangers following the sleepers across the street to the Civic Auditorium overhang where they then sought shelter–and driven from there. Both structures are vacant at night.

All bathrooms remained closed late at night; the City Hall bathrooms (apparently on the order of City Manager Martin Bernal) during the day as well “for vandalism” (though they seemed to work well enough when “respectable” groups were meeting in City Council chambers.

Video of the April 6th police expulsion raids is at https://www.youtube.com/watch?v=BVvpZ5RE9FI&feature=youtu.be .

Freedom Sleepers will be meeting Tuesday night in front of City Hall at 7 PM to discuss preparations to support a May 9th mega-demo against the Sleeping Ban as well as support for the nightly Survival Sleepers. The meeting will follow a 6 PM meeting on the 2nd floor of the Main Public Library around the Homeless Crisis.

There will also be a free showing Wednesday April 19th up at UCSC at the Kresge Seminar Room #159. Featured will be Brent Adams’ “Out of Sight, Out of Mind”, Israel Dawson’s “Freedom Sleepers”, and Rebecca Gourevitch’s “Holding Out”.

Freedom SleepOut #93 will go from Tuesday afternoon until Wednesday morning–the public is invited to drop in, stay awhile, bring blankets, sleeping bags, and video devices to film and post what the City is seeking to hide or ignore–the abuse of homeless people at the very seat of government.

END_OF_DOCUMENT_TOKEN_TO_BE_REPLACED

With lots of interviews from the last week including Leafblowing Away the Homeless To Prepare for the Post Office Fence,  Remembering Michael Mears at his Memorial 4-11, as well as updates, groans, and other goodies in this five-hour show.

Show also archives at http://radiolibre.org/brb/brb170416.mp3  if you missed it.