In spite of being censored from the SCRAM (Santa Cruz Resistance Against Militarism) coalition and our name removed from their endorsers in a closed meeting to which HUFF was not invited, we showed up yesterday to support the BearCat Rejection.   Coming UP on the agenda tomorrow will be Reviewing Stay Away Orders by Parks and Recreation at City Hall; Pursuing the Public Safety Committee after it cancelled its Monday meeting; Updates on the Sleeping Ban Slog towards Small Claims Court; Right2Rest lobbying…and more!  Plus coffee, cookies, and gosh knows what else!
__._,_.___

END_OF_DOCUMENT_TOKEN_TO_BE_REPLACED

Latest Update to the SCPD Policy Manual including Use Policy on the Bearcat
by Robert Norse (and the SCPD) ( rnorse3 [at] hotmail.com )
Friday Feb 27th, 2015 10:38 PM

After several requests and considerable delay, assistant City Attorney Reed Gallogly finally coughed up the recent additions to the SCPD Policy Manual. I previously posted the full manual as of 2011 at http://www.indybay.org/newsitems/2012/05/19/18713791.php and the new one as of November 2014 is posted below as well as a January 2015 addition, included the day after the City Council meeting where Mayor Lane gave special time to Police Chief Vogel to read his policy. 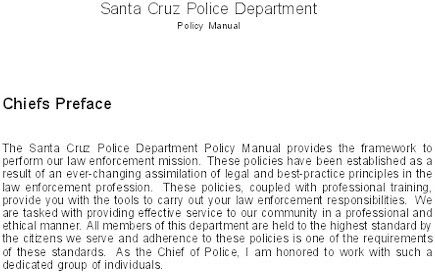 policy_manual_11-12-14.pdf
download PDF (5.5MB)
THE MAYOR PROVIDES THE POLICE CHIEF A PROPAGANDA PLATFORM
Chief Vogel insisted at the January 13th Council meeting that he would not make this policy statement public It was, of course, available on video and audio–especially for those who (“illegally”) recorded it as I and John Malkin did.

Vogel read off his description of the policy at the end of the Oral Communications period pmn 1-13 in the special time allowed by Mayor Lane apparently designed to deflect and calm the concerns of the largely anti-BearCat crowd that tried to speak. Vogel’s apparently created this “policy” without any input from critics or the community generally. It’s been included in the SCPD Policy Manual by Vogel’s fiat. With no dissent so far from anyone on the Council.

Lane, however, did not allow the public to conclude its input nor invite any critics to express their concerns at that meeting.

Nor did he direct Vogel to respond to questions about the supposed “deadline” date which he and Deputy Chief Clark falsely claimed required accepting the Bearcat before the end of 2014. Members of the audience who shouted out these questions were hushed into silence. Decorum, after all, must be preserved.

FITTING INTO THE POLICE BAKER-BUTLER GLORIFICATION AGENDA
Instead of marching to the police station, sitting in at the City Manager’s office, or taking other forceful direct action, SCRAM (Santa Cruz Resistance Against Militarization) deferred any protests, originally scheduled for the February 24th meeting. Food Not Bombs did not provide food at the event–which had previously been scheduled. The purpose of ducking the meeting seemed to be to avoid offending middle class police patrons who were attending a round of SCPD glorification with yet another memorial to former cops Baker and Butler. These two are well-known in the homeless community for their abusive behavior towards the poor.

Meanwhile the struggle for the cash being collecting using the Butler and Baker deaths as fund-raisers is chronicled in the rapidly-shrinking Sentinel at http://www.santacruzsentinel.com/general-news/20150213/legal-battle-in-santa-cruz-fallen-officers-fund-extended-to-city .

BACK TO THE REAL ISSUES
There is however, I’m told, a march against police brutality being scheduled by UCSC students on Wednesday afternoon from the Quarry to the SCPD station against police violence as oart ofthe 96 Hours of Action around tuition hikes and such.

BEARCAT USE POLICY
For some reason I was unable to download the individual page describing the BearCat Policy in the updates I received, so I’ve copied it below:

The Santa Cruz Police Department is obligated to make the BearCat rescue vehicle available to other law enforcement agencies upon request. Any request ofr use of the BearCat rescue vehicle requires review and approval from a police manager. In the event the request is approved, the Santa Cruz Police Department will provide our own personnel to safely operate and deploy the vehicle.

Use of the BearCat rescue vehicle is restricted to those situations where the utility and capability of the vehicle are necessary and when the capabilities of other department vehicles are insufficient for those situations as determined by the chief of police or department designee. This includes, but is not limited to public safety emergencies, where life threatening conditions exist, the extraction of persons at risk, the need to insert police, fire, and emergency medical services into a dangerous environment, ballistic or projectile protection, high-risk vehicle stops, high-risk warrant service, active shooters, unsecured crime scenes.

This policy recognizes that it is not possible to catalog or anticipate all situations where the BearCat rescue vehicles capabilities are necessary and/or appropriate. This policy acknowledges that it is not the intent that the BearCat rescue vehicle be used in an offense manner where no threat to the public or first responder personnel exists. such situations would include, but are not limited to parades and peaceful demonstrations where violence is not threatened towards the public, property, or law enforcement personnel.