The ever lovable Bathrobespierre’s Broadsides, which has been playing “flashback” shows from earlier years, will be returning to the 2015 era tonight at 101.3 FM and www.freakradio.org with commentary and coverage of segments of last Tuesday’s Shitty Council meeting, street interviews, Keith McHenry on the Blue Box 2 from the hearing last Thursday in defense of street performers…and more!

If you missed the show (because the message is going out so late), it will be archived at http://radiolibre.org/brb/brb151112.mp3 shortly after broadcast.

HUFF agenda is likely to be brooding over:

+++  Berkeley’s Upcoming SleepOut on 11-16 and the Berkeley City Council meeting’s planned attack on the homeless (See http://www.thestreetspirit.org/more-anti-homeless-laws-on-the-way-on-november-17/)
+++ The on-going struggle to focus federal attention via the DOJ and HUD oversight to finally force City Council to pay attention to basic homeless survival rights this winter before the suffering toll grows from El Nino.
+++ Support for other allied student and community struggles (Tuition/Police Abuse by UCSC activists, the Beach Flats Community Garden by activists there,  Tenant organizing).
+++ Transformed Support for the Freedom Sleepers Movement to account for freezing and wet weather ahead.
…and more!   Come to the Freedom Sleep Out Tonight, then wake up merry and bright for the HUFF follow-up!  What fun!

END_OF_DOCUMENT_TOKEN_TO_BE_REPLACED

The Sunday show will be another Flashback–perhaps the last for awhile, as I’m going to be playing new and more current material next Thursday for the 11-19 6:30 PM show.

Specifically, Sunday’s show tomorrow will run two old shows back to back–the December 8th, 2011 show [http://radiolibre.org/brb/brb111208.mp3] recorded immediately after the police crushing of the San Lorenzo campground and the earlier destruction of the Occupy Octagon.  This will be followed by the January 5, 2012 show [http://radiolibre.org/brb/brb120105.mp3]  which featured a live question-and-answer session with then-Mayor Don Lane.

Both shows can be independently downloaded by going to the links above.

Free Radio Santa Cruz still has no studio–hence the fact we’re broadcasting and playing old shows.  And we’re still offer a sweet 500 bucks to whoever can find us one!   That pays for at least 150 cups of coffee!  Call me if you have any ideas, info, or inspiration!

Another follow-up Flashback on Free Radio Santa Cruz Archival 9-30-2015  Bathrobespierre’s Broadsides show:     Verdict in the “Can a Heckler Shut Down a Political Song?” case… Sandra Leigh interviews me and Curbhugger Chris on PeaceCamp2010 and more.

Are these messages helpful to you HUFF e-mail readers?   Let me know.

Moving from Freedom SleepOut #17 to HUFF Chat-and-Sip #1608 (we’ve been meeting weekly since 1989 or perhaps before).    Agenda prospects for:  tonight’s City Commission for the Prevention of Violence to Women’s discussion of safe sleeping zones for women to (perhaps) be forwarded to the next Shitty Council meeting; RV Parking and Safe Zones on November 24th agenda; Panhandling laws coming up for challenge?; Blue Box 2 Case 8:30 AM 11-5; whatever the cold wind blows in…along with hot coffee and other drinkables.

NOTES BY NORSE:  Santa Cruz’s anti-homeless panhandling law–Municipal Ordinance 9.10–was one of the first in California in 1994 to enact a wide swath of location and time prohibitions.  Prohibitions that have nothing to do with aggressive or abusive behavior.  They were enacted along with the “no sitting” law and prohibitions against protests in downtown Santa Cruz.  It was done at the behest of then Councilmember, former Supervisor, and Bookshop Santa Cruz owner Neal Coonerty to remake the downtown in a more conservative and business-friendly image.   With the connivance and consent of current Council member and former Mayor Cynthia Mathews.   It also happened around the time that protests demanding suspension of the Sleeping, Blanket, and Camping Bans were mounting with early pro-homeless decisions in the Tobe case.
These anti-poor laws were expanded numerous times in the decades that followed.   They criminalize holding up a sign silently at night and any sparechanging on 98% of the sidewalks in downtown, business, and beachfront districts.  Also banned: doing so with a backpack, doing so in a group of two no matter how peacefully or silently, doing so while in possession of a dog (but not a cat, mercifully exempting Gizmo, the beloved Pacific Ave. habituee), and other such clearly unconstitutional restrictions.
The only time any section of the nasty SCMC 9.10  was taken to court, attorneys won damages and forced City Council to make changes in the law.  Unfortunately these were just for a minor section–that which involved prohibitions against “profane” [written] language.  A local man –John Maurer–was fed up with harassment from a fanatic SCPD “Community Service” Officer–for leaving his property to use the restroom and getting ticketed for it.  He inserted in his cap “Fuck the Pigs” and was then cited for that for bad language panhandling.   See  “Powdering The Crooked Nose of The City’s Anti-Homeless Panhandling Law” at https://www.indybay.org/newsitems/2006/06/19/18281363.php
Some examples and background:  https://www.indybay.org/newsitems/2011/08/31/18689196.php “Two Men Cited Downtown on Sunday – One for His Dog, One for ?” .  Relevant sections of the panhandling law can be found at https://www.indybay.org/newsitems/2010/08/29/18657087.php “Deadly Downtown Ordinances“.
If you see police, “Hosts, or security thugs hassling panhandlers, musicians, vendors, or other poor locals, please video, audio, and post reports on indybay.org/santacruz .

Last year, 76% of cities banned panhandling in some locations. 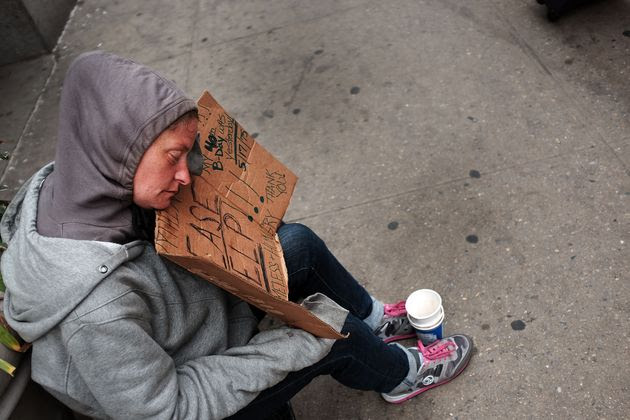 NEW YORK, NY – MAY 18: A homeless woman rests while panhandling along Eighth Avenue in Manhattan on May 18, 2015 in New York City. As many parts of once seedy New York City have been transformed into family and shopping friendly environments, 8th Avenue near the Port Authority bus station is one of the last hold-outs to old gritty Manhattan. Last week a man was shot by police after he attacked numerous people with a hammer along a stretch of the street. There is a high police presence along the street and fights and arrests for vagrancy are common.

DENVER (AP) — Cities trying to limit panhandling in downtowns and tourist areas are facing a new legal hurdle because of a recent Supreme Court ruling that seemingly has nothing to do with asking for money.

Federal judges in at least three states have cited a June ruling by the high court on the size of church signs as a reason for overturning anti-panhandling laws or sending cases disputing those laws back to lower courts for review. One of those cases – in the western Colorado city of Grand Junction – has spurred Colorado communities including Denver and Boulder to suspend or change their laws restricting where and when people can panhandle.

The reason is something called content discrimination. The Supreme Court ruled that the town of Gilbert, Arizona, did not have the right to limit the size of signs put up to direct worshipers to services at a small church because the town didn’t set the same limits for real estate or political signs. The same issue has been raised in lawsuits filed by the American Civil Liberties Union and other groups challenging anti-panhandling laws.

U.S. District Judge Christine Arguello ruled on Sept. 30 that it was unconstitutional for Grand Junction to bar people from asking for money after dark and near bus stops and restaurant patios because they singled out a kind of speech – asking for money – for special treatment without a compelling reason.

Arguello had concluded earlier in the case brought by the state ACLU that the law was discriminatory but said the Supreme Court church signs ruling made it clear that laws that limit speech on broad topics, not just particular viewpoints, also amount to content discrimination. She let stand parts of the law that prohibit panhandlers from threatening people.

After the Grand Junction ruling, Boulder quickly got rid of panhandling restrictions along its pedestrian mall, Longmont suspended its enforcement of panhandling laws and the Denver City Council is considering removing its restrictions on when and where panhandlers can solicit money but plans to keeping its ban on threatening behavior. Colorado Springs also suspended portions of its law at the urging of the ACLU before the Grand Junction ruling.

Appeals courts also have sent challenges to anti-panhandling laws in Worcester, Massachusetts, and Springfield, Illinois, back to lower courts to reconsider them in light of the Supreme Court’s ruling. Decisions on both are still pending.

The debate over panhandling laws comes at a time when more cities have sought to restrict where people can ask for money. The National Law Center on Homelessness & Poverty says 76 percent of cities banned panhandling in some locations in 2014, a 20 percent increase since 2011. Many cities say the laws are meant not to discourage giving to people in need but to protect residents and help keep their communities safe.

Mark Silverstein, legal director of the ACLU of Colorado, thinks most panhandling laws nationally have been written so broadly that many of them also will have to be changed because of the ruling. His lawyers plan to tell cities in Colorado about the changes they think are needed.

“The government can’t pass a law to ban all speech that’s annoying or irritating,” he said.

Some constitutional experts think the sign ruling also could have implications beyond panhandling including government regulation of advertising, securities and communications.

While some see that as a good thing for free speech, others, like Yale Law School Dean Robert Post, see potential problems. He said the ruling was written so broadly that it applies to commercial speech and could be used, for example, to try to block the Federal Trade Commission’s sanctions against misleading advertisements.

In Worcester, city officials plan to fight to keep limits banning panhandling near bus stops and ATMs as well as standing in medians for any reasons.

“We see it (panhandling restrictions) as one important piece of the puzzle of dealing with the opioid crisis in the country,” city solicitor David Moore said.

Springfield also doesn’t plan to give up on its restrictions that bar going up to people and directly asking for money in the city’s historic downtown, where tourists flock to see Abraham Lincoln’s house. Panhandlers are still allowed to hold signs soliciting donations, city corporation counsel Jim Zerkle said. The city has filed arguments in favor of keeping the law.

In Denver, it’s not clear how much of a difference the proposed changes will make on the street. The city says it’s averaged about 300 panhandling citations a year since its law took effect in 2000 and roughly two-thirds of those violations involved aggressive behavior, rather than violating the time and place limits it’s considering scrapping.

On a recent day, William Jones, 69, was one of several panhandlers set up along the city’s 16th Street Pedestrian Mall not far from one of the parking meters the city installed to raise money for the homeless and discourage panhandling.

Jones, a Navy veteran who has worked breaking horses, as a restaurant cook and in construction, said he does not care for the aggressive style. He sat on his walker with a sign, saying good morning people and waved back at a passing bus driver and an outreach worker from a homeless shelter.

Streaming today on freakradio.org and broadcasting at 101.3 FM:   PeaceCamp 2010—weeks after being driven from the Courthouse to the Sidewalk Near City Hall, Elisse Cadman and Ed Frey in the Studio, Sgt. “I’m Not Harassing” Harms gives a view from the SCPD, and more !

Still broadcasting archives as we struggle to put together a current show–without a studio!  Contact us at 423-4833 or freakradio.org if you are interested in the $500 reward for finding us a small space where we can set up a studio for a year.

The first show is an interesting reflection on the Waiting List exception to the Santa Cruz Camping Ordinance–likely passed because Los Angeles and San Diego had dumped their nighttime bans and the ongoing PeaceCamp 2010 protest continued nightly at City Hall.