After being rousted from downtown Santa Cruz and given San Lorenzo Park, homeless people are being told to move again. 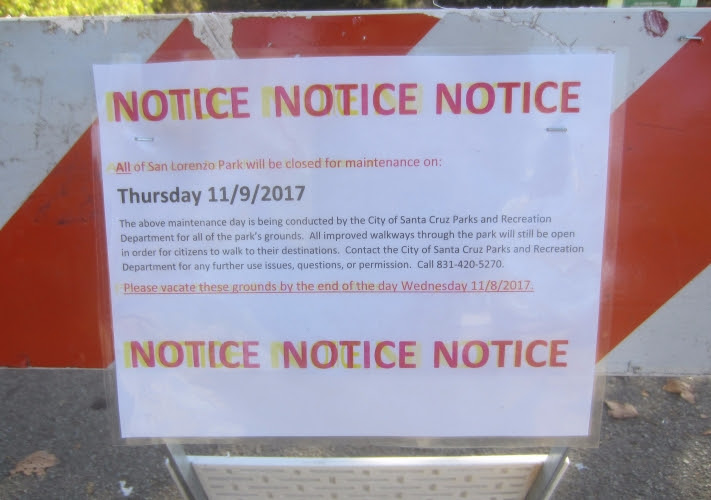 original image (3915×2751)
The Hooverville-type camp on the benchlands in San Lorenzo Park now faces eviction. A notice was posted closing the park for “maintenance” on Thursday 9 November 2017.

Homeless people began occuping the benchlands after the Santa Cruz police vowed to “clean-up the downtown area”. When asked were they could go, the police told the homeless that they could go to San Lorenzo Park. Police Chief Andrew Mills declared, From the Clock Tower to Laurel Street, from Front to Center Streets, SCPD will spend the resources needed to ensure order. “

Now the City Parks Department says it is time to move along. 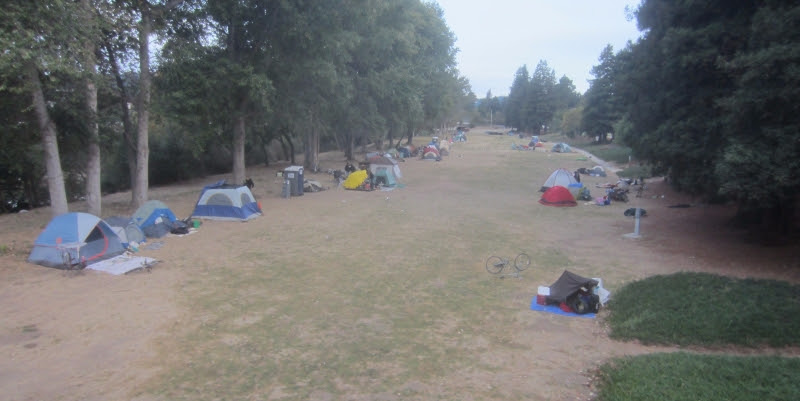 Gorillas in the Mist: Are the Goonsquads Coming?

CAMOUFLAGE FOR ELIMINATION?
The danger that this is an eviction and not a one-day relocation for “park maintenance” is real.

It’s not really clear what kind of “maintenance” is required here. I’ve never heard of the park being closed totally to the public (other than the usual privatized-for-a-day financial scams) for this purpose.

I suppose it could be a genuine “clean up” operation since San Lorenzo hasn’t seen so massive a continuous occupation since the Occupy movement of Fall 2011.

However there’s been no reassurance (whatever weight that would really have) from Police Chief Andy Mills and Parks Czar Mauro Garcia–much less from the City Council–that the “maintenance” will be followed by restoration of the campground tolerance (and portapotty/washing station/trash pickup support).

So this could be a dress rehersal for an evict-and-deport operation timed to operate with the opening of (as usual very limited) Winter Shelter program on November 15th.

BERKELEY CRACKDOWN
This also comes at a time when Berkeley’s successful “Sanctuary Village” style encampment “Here…There” (earlier known as First they Came for the Homeless) was driven off last Saturday by BART goon squads after a peaceful period of ten months there with community support.

On the upside, note the unusual order by the federal judge Alsop.

While denying the camp’s call for a stay of execution, he also demands of Berkeley and the campers that by late November they come up with “a practical plan for shelter for its homeless during the coming winter…. Do not simply recite the programs the City purports to offer, for they are admittedly insufficient. Submit a plan that will shelter substantially all of Berkeley’s homeless. ..Be specific. Name soccer fields and open spaces [that could be converted].. to tent cities.”

This is a rare call for information from an otherwise-hostile Federal judge (he denied the campers attempt to stop the BART demolition of the camp).

ORGANIZING RESPONSE THERE BUT NOT HERE?
In Berkeley the Here…There camp had a history of being stalked and attacked by police agencies over a dozen times. http://www.berkeleyside.com/2016/12/21/berkeley-removes-homeless-camp-from-adeline-st-median/

City authorities finally realized–as Portland authorities did with the Dignity Camp that became Dignity Village in 2002–that they weren’t going to destroy the integrity and determination of the camp. So for ten months, they stopped the police raids, even yielding under pressure to allow a nearby portapotty to be set up.

Now displaced camp residents have already set up camp again at City Hall. See https://www.facebook.com/firsttheycameforthehomeless/ . The determination not to end the protest-and-survive camp has been renewed with community support.

Food Not Bombs, newly strengthened with volunteers, has brought food to the Freedom Sleeper encampment every Tuesday. Some activists there have discussed solidarity with the campers when the police come to remove the survival campers on (or before) November 9th.

Of course, the more direct course is to go down to San Lorenzo Park and offer support and solidarity to the campers themselves.

Or contact Food not Bombs at the Santa Cruz Food Not Bombs facebook page. You can also reach HUFF at 831-423-4833.

The show also streams at freakradio.org .

Updates:  Sleep Tight Tenants and Activists Fight Back!   Cornerstone Carol Denney reports on Berkeley’s Here and There Encampment Relocation    Interviews A-Plenty from Downtown and San Lorenzo Park   Inside a HUFF Meeting   and more….
Archives later today at http://radiolibre.org/brb/brb171105.mp3   if you missed the show as it was playing.

Contact 575-770-3377 to volunteer different kinds of support for the Survival Sleepers now relocated to San Lorenzo Park.   Join Food Not Bombs locally.  Sign up for the Emergency Response Netowork to defend Food Not Bombs as well as the San Lorenzo Sleepers when the token Winter Shelter opens in mid-month.

The audio of the Sleep Tight Protest protesting unfair evictions and fair relocation funding for the tenants of 127 Ocean St. will be broadcast (hopefully) on Sunday at 10 AM as part of the 9:30 AM–2 PM show.

The show streams on freakradio.org and archives at http://radiolibre.org/brb/brb171102.mp3

For info on how to act and not just listen while gentrification galooses take over the City and drive out the poor, go to the Food Not Bombs and  Freedom Sleeper facebook pages.  For more direct information on the folks sleeping at night in San Lorenzo Park, talk with them directly there.

We’re back at the usual Sub Rosa Cafe 11 AM meeting Wednesday November 1st.   HUFF will likely continue on a bi-weekly schedule with though that will be decided by those attending.   This decision was made to accommodate Monterey County activists currently fighting the Lapis Road Residential Vehicle Homeowner Struggle who have to come a longer distance.

Topics coming up will be activist Phil Posner’s survey of the San Lorenzo (de facto) Campground taken two weeks ago; solidarity between renters and houseless folks and the latest renter protection protest at the Sleep Tight apartments; adjourning to look over SCPD and P & R records detailing the current use of Stay-Away’s; updates from the federal court decision Tuesday allowing BART to deport homeless from the Here and There (formerly First They Came for the Homeless) encampment, from Sacramento’s trial against the City’s Camping Ban, and more….

Also up for discussion, HUFF’s position regarding SCPD Chief Mills supposed “liberal” “no nighttime camping busts” policy as contrasted with continuing harassment of the unhoused downtown for trivial offenses.  The latest Sentinel Jessica York media spin is at http://www.santacruzsentinel.com/social-affairs/20171030/santa-cruz-county-hepatitis-a-outbreak-tapers-benchlands-homeless-camp-grows while SCPD Chief Mills has alarmed some RV dwellers and survival sleepers-in-cars with his apparent plan to “assign five police lieutenants to individual neighborhoods to focus on each area’s looming issues, such as recreational vehicles parked for extended times in Westside neighborhoods.” (See http://www.santacruzsentinel.com/social-affairs/20171025/new-santa-cruz-police-chief-intends-to-reshape-department-priorities?source=most_viewed )

Please report conditions in San Lorenzo Park, around the Post Office, and along the Coral St. sidewalk where numerous nightly encampments have grown. And also note the harassment actions against homeless in downtown, residential, and business areas where ticketing apparently has continued and possibly intensified.

The supposed “liberal” Mills policy means little if police and rangers are ticketing sleepers for “other crimes” on public property such as being in a park after dark, smoking, blocking the sidewalk, lodging, trespass, etc.

We have few if any reports of police and ranger use of the newly expanded Stay-Away law.  Its selective enforcement powers  are described at https://www.indybay.org/newsitems/2017/09/12/18802845.php (“Stacked Deck Stay-Away Law Expansion Promises More Pain for Poor Outside“)   The SCPD has readied Public Records that document the use of this abusive process for the last 9 months as has Parks and Recreation–after much prompting.   Help HUFF document this wretched recordto uncover the obvious pattern of enforcement which largely impacts houseless people.  We’ll be hoping to look into some of the records after the HUFF meeting.

You can also help fight the Stay-Away orders as they are individually levied on homeless folks contact Food Not Bombs  or HUFF  (numbers below).  Let these folks know if you or anyone you know has recently been given a Stay-Away order along with an Infraction ticket, particularly if it’s for longer than 24 hours (or 72 hours after October 12th when the new expanded law goes into effect).

If meetings aren’t your thing, but you  wish to work on Public Records, Help compile accounts of Police/Ranger abuses and/or Assist in getting interviews for Free Radio broadcasts or You-Tube Postings, contact Bathrobespierre Robert at 831-423-4833.

Activists around Food Not Bombs and the Freedom Sleepers are also looking for help gathering volunteers for the support meals on Saturday & Sunday as well as folks who want to help homeless harassed with citations for Being Visibly Homeless.  Contact them at 575-770-3377.

Or go on line to the facebook page of Santa Cruz Food Not Bombs.   FNB activists fear an upsurge of pressure against the downtown meals near the post office as follow up to the “coaxed removal” of the homeless encampment there.   Sign up to support their Emergency Response Network by contacting them through Facebook or in person at the Saturday and Sunday meals.  The idea is to quickly gather in numbers if city authorities attempt to shut down the meal.