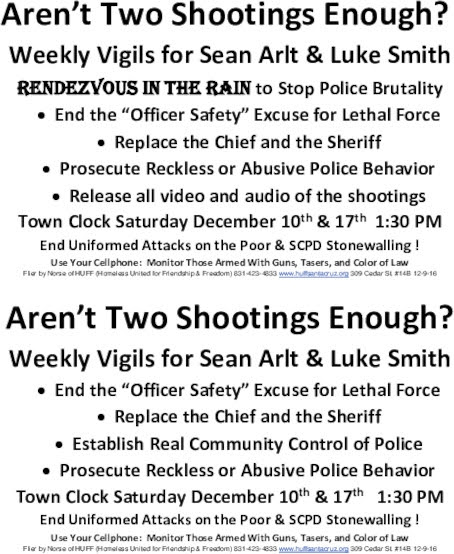 Back again to heat up things with coffee and catcalls,  HUFF plans a meeting with Councilmember Elect Sandy Brown, HUFF proposals for next Saturday’s anti-police violence rally, updates on the somewhat successful attack on the County-s RV  ban, spinoff demonstratons supporting the Freedom Sleepers,  a report on the Winter Shelter and Warming Center mini-programs and maybe more…

Location Details On the sidewalks near City Hall, barred from taking shelter under the eaves in the rain, protesters will spend the night outside, under tarps, perhaps with a tent or two, and in nearby vehicles.  For nearly a year and a half, a small community of housed and homeless have demanded an end to laws criminalizing survival sleeping and other life-sustaining activities. Watchers, well-wishers, blankets, and visitors welcome!

SHELTER SHUFFLE FOR THE FEW; WIND, RAIN, AND TICKETS FOR THE MANY
As temperatures dive below 40 and winter approaches in earnest, city and county authorities are providing $360,000 worth of nightly shelter for 50-75 people at VFW Post No. 7263 at 2259 7th Ave. in Live Oak. The mini-program (considering there are 3000+ unsheltered in the County) will expand to 100-125 in January with the opening of the Salvation Army building downtown at 721 Laurel St. –unavailable during a cold December because it’s being used for “fund-raising” activities.The usual NIMBY (Not-in-My-Back-Yard) approach is evident. The pick-up site is several miles from the 7th Ave. shelter. Clients are banned from walking or driving to the shelter. In-take worker Steve Pleich notes folks will have to go through an initial questioning process (5-10 minutes), presumably to satisfy the Take Back Santa Cruz-minded folks as well as provide data for more grant-grabbing activity.

Old-timers remembered when you got sheltered if you showed up. Not any more.
Meals will be provided for the few that get into the program, but the Homeless (Lack of) Services Center (a “supporter” of the Winter Shelter program) has made no move to restore the open meals that were its historic responsibility abandoned in June of 2015.

Run by the Association of Faith Communities, the AFC bosses may not require users to be present every night or be kicked out of the program–which they do regularly at their year-round 20-person shelter program that moves from church to church. Boss Debbi Bates reportedly excluded several women from the smaller program because they took Tuesday nights out to join the Freedom Sleeper protests. Bates now heads the far more costly $360 grand Winter Shelter.

END_OF_DOCUMENT_TOKEN_TO_BE_REPLACED

[Attachment(s) from Robert included below]

Download attachment for the PDF.  This is the text of the flyer.  Contact HUFF at 423-4833 for more information.

Come to the Town Clock

Use Your Cellphone:  Monitor Those Armed With Guns, Tasers, and Color of Law

Attachment(s) from Robert | View attachments on the web

Liberation News and HUFF (Homeless United for Friendship & Freedom) invite you to join us with signs and friends to demand justice in the recent killing of Luke Smith and Sean Arlt.

We will be speaking out demanding strong changes in local law enforcement to establish real community control over the armed agencies. Lethal shooting is NOT a necessary response to individuals carrying a rake or a 4″ knife, surrounded by armed and well-armored police.