Norse’s Note:   My apologies to Candidate Bush, HUFFsters here and elsewhere, as well as the public generally for missing my appointment with Craig Bush last Sunday.  This Sunday will be different.   Though Bush has not been on my radar as a homeless civil rights activist, I was impressed enough with the platform on his website to feel motivated to encourage him to come on the air (though an invitation has been extended to the dreary list of candidates).   From his website, I gather that his major interests and issues are around opposing desal, new economic stimulus ideas, and environmental concerns.  However his positions against downtown repression of performers and city repression of the homeless seem clearer and more specific to me than that of any other of the candidates.
I also received a more recent e-mail from Craig Bush which included the following: “I have a candidate forum at Calvary Episcopal church downtown. [7 PM Thursday 10-9]” “I would like to bring music that pays tribute to the street performing artists and musicians of SC. Move the story around the repression, bullying. ticketing that is forcing them out. I have stories of performing artists that have performed on our streets. Artists, dancers and musicians who sprung forth dance, music and theatre that has been performed on our stages here. When we crush the seeds of creativity we destroy our cultural heritage. I have a green light program that fosters creativity among our aspiring street performers. I have several specific solutions to improve social services here. I hope to get in some time to discuss them all.” “I also have an economic stimulus plan that includes the organic permaculture corridor running on both sides of the rr track from Davenport to Watsonville. City formulated worker co-ops to manufacture hemp shopping bags with city logo. Provides long term unemployed 55 and over full time good paying jobs in a safe green working environment. A sustainable water system that will put us in a position to export water and lower our water bills. A system that produces the purest naturally alkaline water in CA. A water system that will enable the return of the salmon. This is what I bring to the table.’
__._,_.___

END_OF_DOCUMENT_TOKEN_TO_BE_REPLACED

With a load of forums, protests, and a court date upcoming, I’ve prepared a preliminary HUFF (Homeless United for Friendship & Freedom)-ish series of questions for the public and the City Council candidates to consider. The Unanswered Questions flyer can be downloaded and distributed or picked up in hard copy at the Sub Rosa Cafe at 703 Pacific Ave. along with the accompanying list of events–possible distribution points for the flyer. 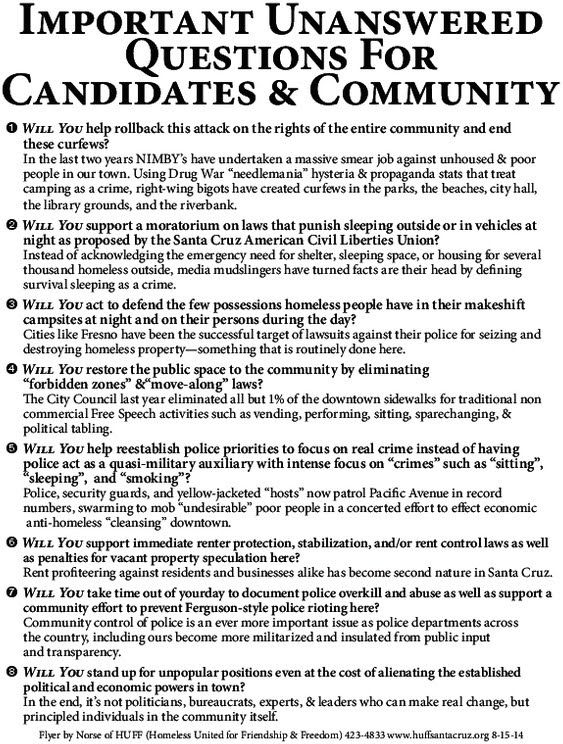 huff_flyer_for_candidates.pdf
download PDF (71.9 KB)
The Unanswered Questions flyer represents my opinions and not necessarily those of HUFF but I think most would agree. I encourage those with upcoming events linked to police or military abuse, human rights violations in Santa Cruz and elsewhere, or the political charades that go on around election time contact me by e-mail so that I can include them in future postings (rnorse3 [at] hotmail.com).
§
by Robert Norse Saturday Aug 16th, 2014 9:49 AM 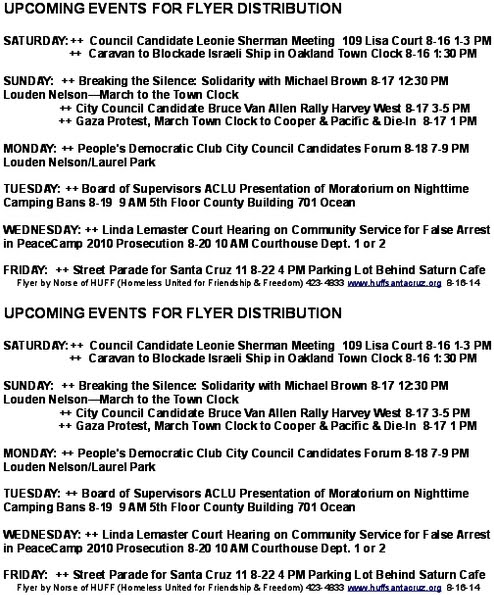